Well the LAN Party has been and gone, thanks to all that came in person and those that wanted to be able to make it. The day was a great success and that is down to you for showing your support and making it a really good fun day. I'd like to extend a big thank you to the S.L.U.G.S, that's the Sheffield University Lan Gaming Society for their great support on this event. They made up 2 full teams for the tournament and part of a 3rd team so thanks again guys. Hopefully you all enjoyed yourself and will be interested if we do this in future. I'll go through the way things shaped up for the day, this includes an early embarrassment for most of the staff players ;) 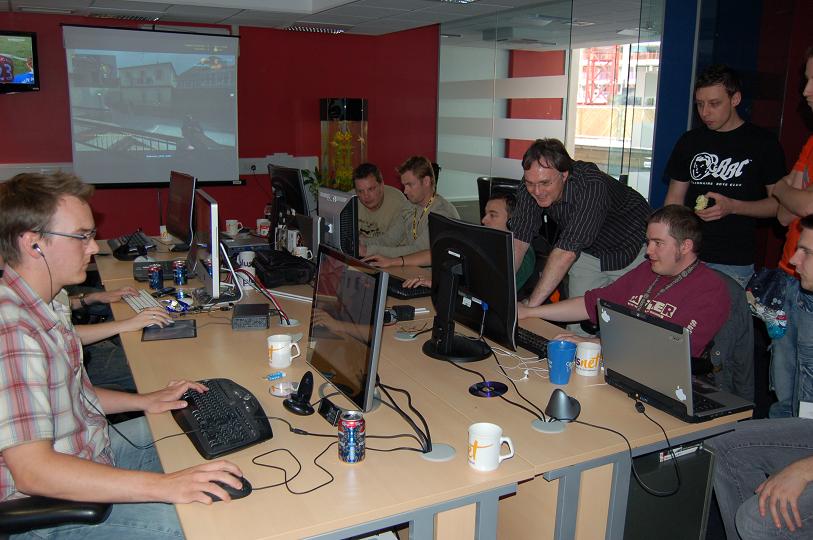 It was a bit touch and go with the network set-up and there were apparently some 'minor' glitches on Friday evening with the VLAN we had set up. This was resolved before Saturday and I'm pleased to say the only people that had issues were 2 members of staff! One of them couldn't get his PC to recognise the network card and then when we managed to eventually get him online his machine decided it didn't want to play and kept crashing. In addition to the LAN Party games we had other entertainment throughout the day. The Xbox 360 and Wii were proving popular and some people went through onto the pool tables in the canteen. Large amounts of coffee were consumed and the coke machine was nearly emptied by the end. 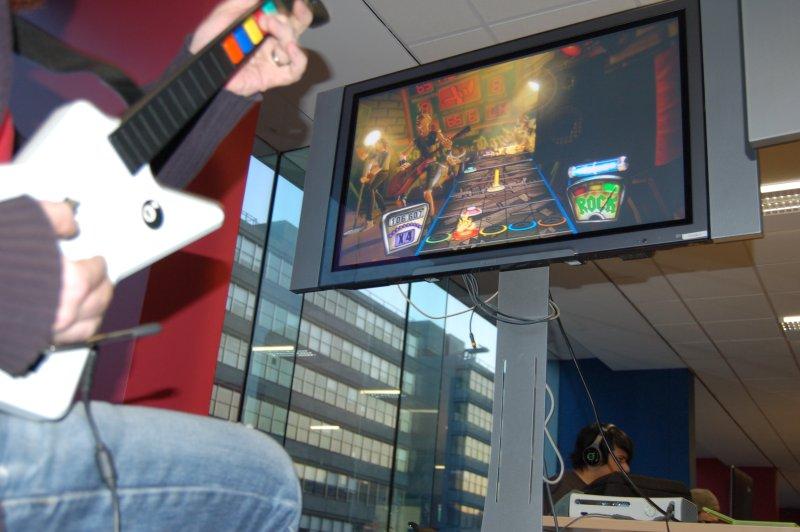 The guests started arriving at 9am and continued right through till Midday. The turnout was good and we ended up with 5 full 6 man teams for the main afternoon competition. Once everyone had arrived and settled in we had a welcome presentation from Mark Kelly outlining the order of events for the day and the prizes on offer. Shortly after this the refreshments were ordered, 40 large pizzas from a well known outlet (they had to get help from another one of the local branches to make sure it was all ready). By the time 2pm came around everyone had plenty of practice time and the tournament was set to start. Due to there being an odd number of teams we only had 1 first round match with the other teams getting a bye straight into the Semis. 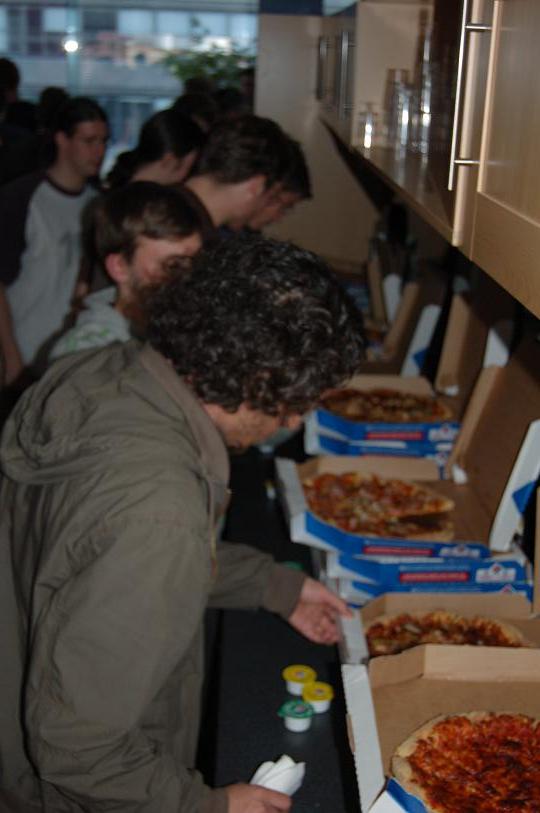 The layout of the tournament was 15 minutes on each side with a coin toss for map choice and starting side. Round 1 Match Staff Team vs Team 3 Team 3 won the toss and decided on Italy for the map. The staff started off very confident, big mistake as after the first 15 minutes they were 9 - 3 down! The pizza has arrived, everyone runs off to eat which means we have to delay the second half of this opening match. The break doesn't really help the staff as the second half finishes 10 - 1, meaning the staff team went out 19-4 overall. Semi Final 1 Team 1 vs Team 2 IIRC this was on Italy too although I can't remember who won the toss. The first half is very tight, going into the changeover with only 1 round separating the 2 teams, Team 1 are 5 - 4 up. The second half is a bit more one-sided with Team 1 dominating and running away 7 - 2 winners, this meant the overall score was 11 - 7. Team 1 head into the final with Team 2 going into the 3rd/4th place play-off. 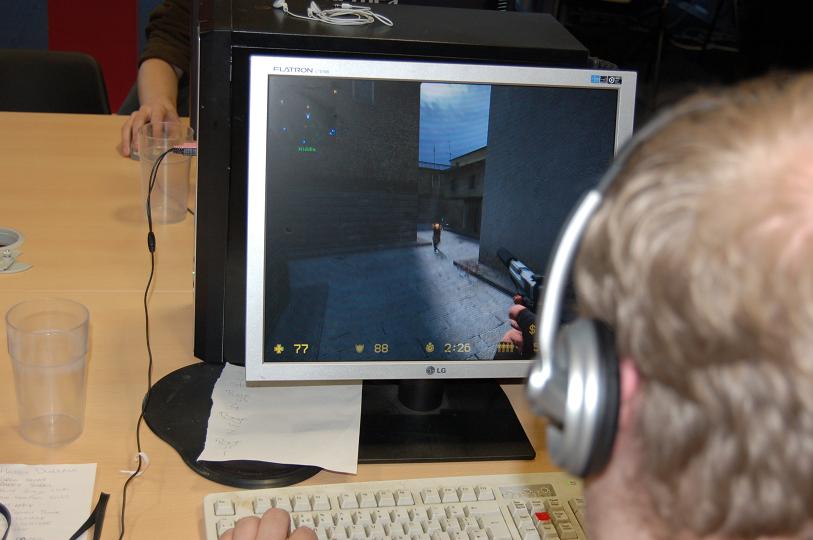 Semi Final 2 Team 3 vs Team 4 After beating the highly fancied staff team, Team 3 were full of confidence, oops! I can't remember which map this was on (I have a feeling it was Office) but TBH it didn't really matter as Team 4 storm into a 10 - 1 halftime lead. This means Team 3 needs to win the first few in the second half. They didn't and Team 4 won by a comprehensive 10 - 0, totalling 20 - 1 over the match. 3rd/4th Place Play-Off Team 2 vs Team 3 Once again memory let's me down, however I have a suspicion this match was on dust. The first half of this match ended with Team 3 having a mammoth 10 - 0 lead. The second half was much tighter but unfortunately we didn't get a result as the server went AWOL with a 5 - 4 score on the board. After a discussion with both teams it was decided the deficit was too great and the match awarded to Team 3. Final Team 1 vs Team 4 Before I give the results of the final I have to mention that there was actually a member of staff in the final playing for Team 1, ME! I was drafted in before the semi-final as they only had 5 players. Even my 1337 skills couldn't save Team 1 as we tumble to a 10 - 0 halftime defeat. The second half starts and we get a round on the board, unfortunately we don't win any more and lost 20 - 1 overall. Even when Team 4 decided they weren't going to use their guns and just knives we couldn't defeat them. So congratulations to the worthy winners, Team 4. We now come to the prize presentations, performed by Neil Armstrong. 3rd Place - Team 3 receive a 1GB USB Flash memory drive per player. 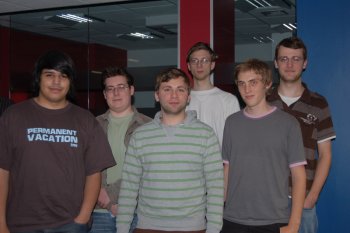 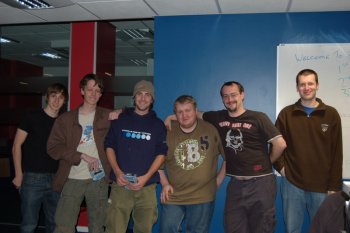 1st Place - Team 4 each get a £50 PC World voucher and a wireless keyboard, mouse, headset and speakerphone set. 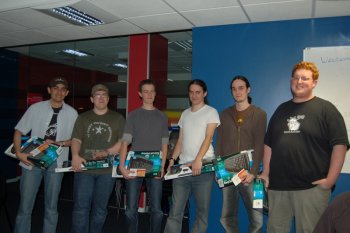 ). As I was also in the final and therefore won a prize there was an extra lucky dip for my 1GB USB memory stick and £50 voucher, as a member of staff I was ineligible to win

So congratulations go to Steve W who got those prizes. Once again many thanks to everyone involved in making this day a great success and we hope to be able to run another one in the future. Chris