eSports vs Real Sports: Are Fans choosing FIFA over a real game?

eSports vs Real Sports: Are Fans choosing FIFA over a real game? 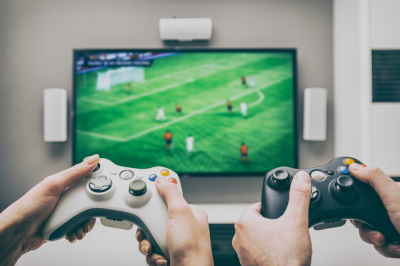 On the sofa or in the park - where do you prefer your football?

Thanks to the cutting edge nature of video games, enjoying a game of Britain’s most popular team sport no longer requires donning a pair of shorts down at your local football pitch.

As gaming ingrains itself into our society, infiltrating deeper into media and entertainment, it got us here at Plusnet thinking; how do we prefer to consume football in 2018?

Delve into the figures, and it’s easy to establish that football is popular both on the pitch and on a console. Sales of the latest instalment in EA Sports’ flagship football game series FIFA, FIFA 18, confirmed that over 7.6 million copies had been sold since its September 2017 release in Europe alone.

On the pitch, the most recent data from the Football Association (FA), football’s governing body in England, said that just over 6 million people aged five and above play some form of football every month.

Both forms have a baseline of popularity then, but which do most of us prefer? We surveyed 1,000 football and gaming fans (of which 54% were female and 46% were men), to see if, when it comes to football, the millennial generation prefer the sofa to the park. Then, we asked some experts from the gaming and telecommunications industries if virtual football can live in harmony with the real thing.

72% of our survey respondents prefer playing football video games to the real thing. It’s a staggeringly high rate of preference to the gaming version of the beautiful game. The reasons behind it outline what games like FIFA and Pro Evolution Soccer bring to the table.

Video games are an escape from reality and offer us the opportunity to realise our dreams of becoming some of the world’s most idolised footballers.

“Sports video games allow us to fantasise about being our favorite players which means we also have the skills of our favourite players and athletes,” said Andrew Selepak, Professor of Telecommunications at the University of Florida.

“I could not now, nor could I when I was younger, play like Messi, but on FIFA, not only can I play like him, I can be him."
Whitney Meers, founder of video game marketing agency Platformer Marketing, explained how the accessibility of games consoles adds to its attraction:

“The barrier to entry is lower with video games. Even in the middle of the night, all you need is the console and the game to get started, not an entire team and access to a pitch.”

The same reasons ring true for their preference of video game over live TV as they do over physical football. 43% said “on video games, I can play as my favourite players”, while 33% said they find playing football video games “more fun”.

Could our shunning of live, in-stadium football be down to value for money? In the BBC’s 2017 Price of Football Survey, 82% of 18-24-year-olds said the cost of tickets was an obstacle to going to more matches. Vidoe game titles like FIFA 18 on the other hand, offer excellent value at around £40 for innumerable hours of entertainment.

Is eSports a real sport?

The FIFA gaming series is a big part of the now well-established field of professional gaming, or eSports. Said to have generated $493 million in revenue in 2017, we wanted to see how much our respondents respect the professional integrity of competitive sports gaming.

Asked if they class professional FIFA (or similar football titles such as Pro Evolution Soccer) competitions as a real sport, 56% said yes.

In fact, so much do people consider eSports to be a real sport that 59% of those we asked want to see eSports at the ultimate sports event. As recently as April, it was announced that eSports were being considered for inclusion in the 2024 Paris Olympics as a “demonstration sport”.

Whitney Mews, an expert in Video Game startups, told us why she thinks eSports inclusion is a must:

“The bottom line is that it's too lucrative an opportunity to miss. It's tough to imagine that a sports industry so popular with people from all over the world shouldn't be included in the Olympics. As the world becomes more digital, it's important to remember that as times change, our definition of sports does, too.”

What the eSports Olympics debate revolves around is whether an activity that lacks a serious physical element can be considered a sport and whether the skill required to excel at eSports is equal to that of professional footballers.

Can eSports and football live in harmony?

Our survey respondents and experts both agree that eSports and football can work together for mutual benefit.

Manchester City and West Ham United are two pioneering Premier League teams embracing eSports. Hiring professional players to represent them at eSports tournaments around the globe, 61% of respondents in our survey said they’d like their team to do the same. The same percentage said they’d be interested in doing it themselves.

Doron Nir, co-founder and CEO of streaming platform StreamElements, thinks pro sports teams will have to embrace eSports to stay ahead of the curve:

“If you are a sports organisation and you’re not looking seriously into building your eSports presence, you are neglecting what is sure to be a major component of your future business.

“Sports clubs are, at their core, entertainment organisations. As such, when a new way of experiencing entertainment arises, they should wholeheartedly embrace it."

It seems that FIFA, the world governing body for football which lends its name to the sport’s most popular video game, is taking notice. This year sees the final of the first eWorld Cup (replacing the “FIFA Interactive World Cup”, which was its name until last year).

There appears to be an appetite for such a competition, as 69% said that they would support a player representing their country at the FIFA eWorld Cup. Passion and patriotism for your country’s sporting achievements need not stop at physical sports, it seems.

Should we be worried by the interest levels in eSports? Will it increasingly drive us away from the football pitch? Might that have significant repercussions on our health? After all, 22% of respondents between 18-23 said they preferred playing football video games as physical football is "too tiring". Our experts, starting with Andrew Selepak, thinks not:

Alex Morrison, the founder of Fully Gaming, echoed this idea:

“I come from a sporting background and in my experience, it's a love of the sport that normally gets you into the corresponding video game.

Do you prefer playing and watching football on a games console to the real thing? Should professional football clubs be making greater strides into the world of eSports, and can the two work together in the future? Join the conversation on Twitter @Plusnet.