App-y Endings: Films that would have turned out better with mobile data (spoilers)

App-y Endings: Films that would have turned out better with mobile data (spoilers)
Topic Options

App-y Endings: Films that would have turned out better with mobile data (spoilers)

There are tonnes of famous movies that would have had much simpler plot lines and guaranteed happy endings if the characters had been able to use a smartphone full to the brim with mobile data.

Whether it’s getting directions from Google Maps, sending a couple of helpful messages on WhatsApp, or simply looking up an online review on TripAdvisor, countless deaths, tragic endings, and arduous journeys could have been avoided with a quick glance at a smartphone.

Here are just a few of the movie plots that would have been changed forever with the help of a smartphone and some mobile data:

Lord of the Rings 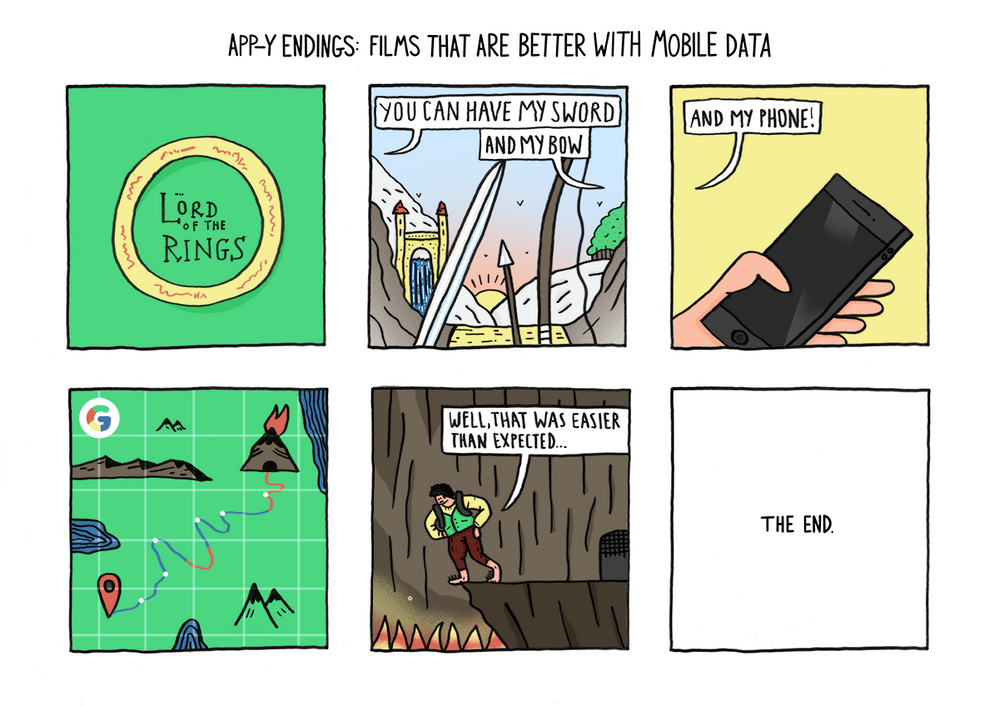 This epic Tolkien series takes place in a fantasy world devoid of all technology and the digital tools we rely on today. The dwarves, elves, and hobbits in Middle Earth are more likely to be found reading from the dust-covered pages of an ancient tome than scrolling through their Twitter feed.

In Lord of the Rings, Frodo is charged with transporting and destroying the one ring to rule them all to save the world from the evil Sauron. One of the most dangerous parts of Frodo and Sam’s tumultuous journey involves a shaky alliance with Gollum, the disgraced former hobbit corrupted by the evil influence of the ring – and the pair’s only source of directions to Mordor.

With a smartphone and a map-based application, like Google or Apple Maps, Frodo and Sam could have easily found their way to Mount Doom, avoiding all orcs, Uruk-Hai, and giant spiders along the way. Without the immediate threat of danger, Frodo could sneak in, lob the ring into the fire and Bilbo’s your uncle – Sauron would be defeated. 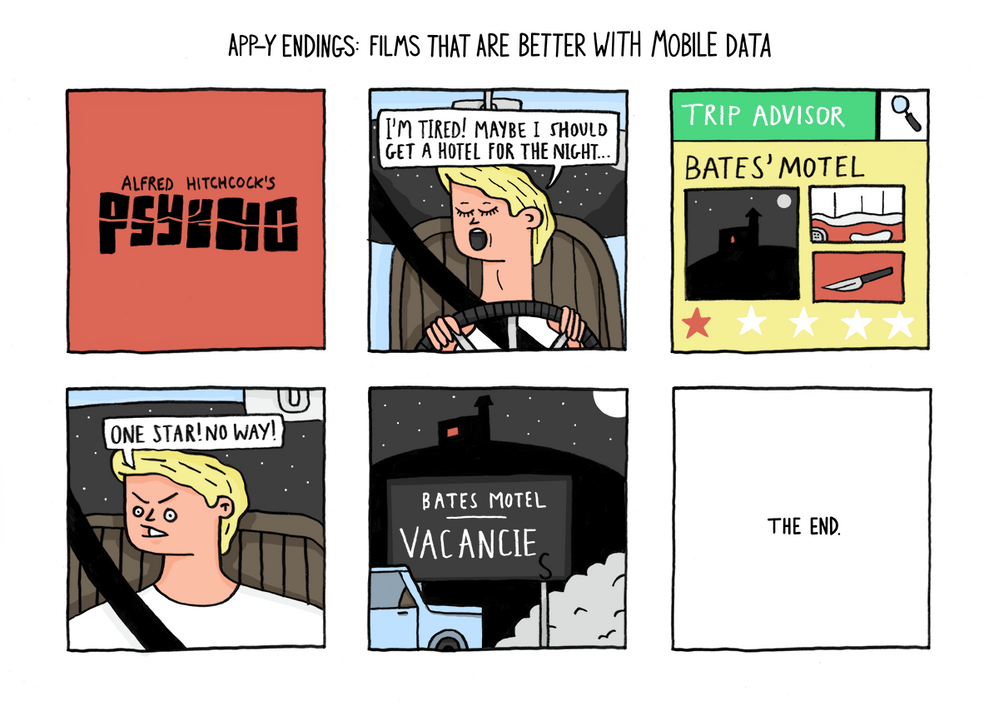 Gaudy decor, poor air-conditioning, and run by a man who’s not only into taxidermy but also has an ‘unconventional’ relationship with his mother – Bates Motel isn’t the most desirable holiday destination we’ve ever encountered.

If any of the characters from Alfred Hitchcock’s classic had taken a few minutes of their time to look at TripAdvisor before taking a room at Bates Motel, they would have seen how grim the place was and been able to find a nicer option in which to stay nearby.

With the help of some mobile data, Marion might have checked into the local Travelodge, instead of meeting a gory end in the shower. 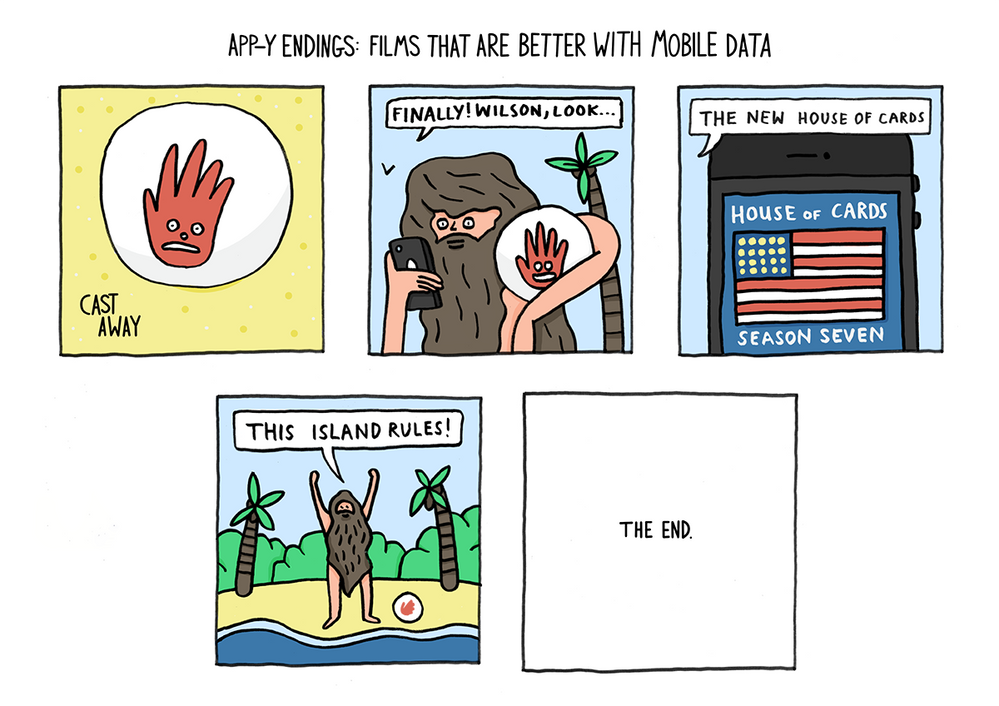 When Chuck Noland becomes marooned on a deserted island following a plane crash, things are looking bleak. Cut off from the world, he struggles to survive both mentally and physically – talking to a volleyball called ‘Wilson’ and spearing fish in an attempt to stay alive.

If Tom Hanks’ character had kept a smartphone in his pocket, apart from being able to call for rescue fairly quickly, life on a beautiful island could actually have been quite fun. Chuck could have used his phone to stream HD videos, read the news each morning, keep in touch with his friends and family, and order all the food he needed from Deliveroo.

With access to every piece of information on the internet and with a world of entertainment and takeaways to hand, lazy island living would not have made for quite as interesting a film as planned. 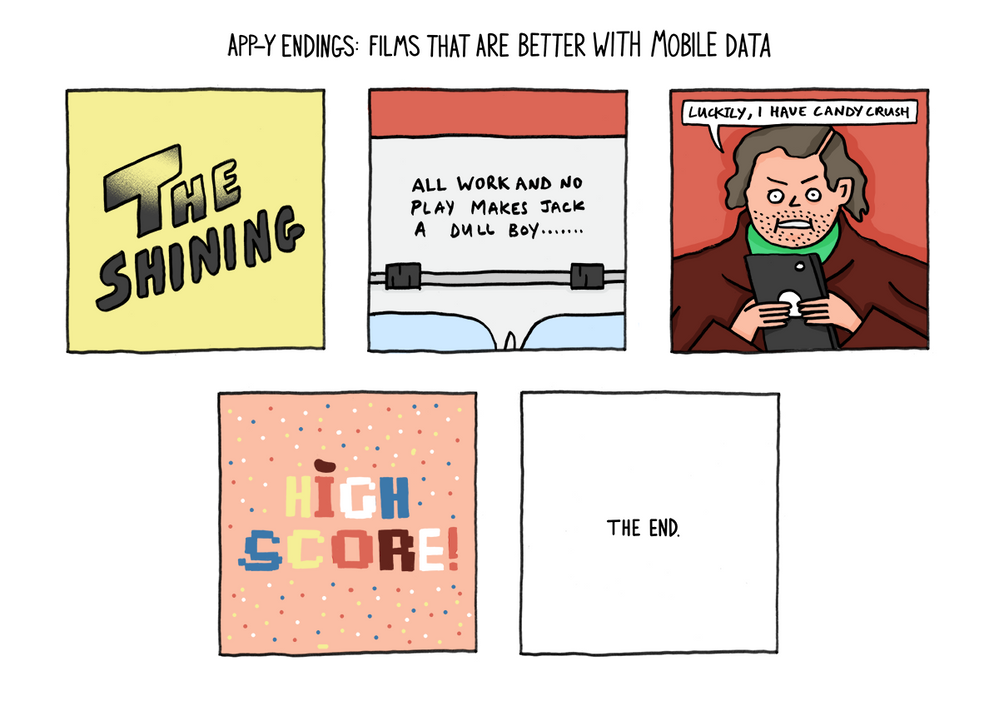 In the position of caretaker, Jack Torrance plans to spend his time at the isolated Overlook Hotel writing, due to the fact it’s closed for the winter. After a couple of months, an evil presence makes Jack become violent and his son, Danny, starts seeing horrific forebodings with his psychic abilities.

If Jack and his son had smartphones while staying in the hotel they would have never got bored and gone crazy. They would have been too distracted playing Angry Birds or Words with Friends and wouldn’t have had the time to explore the hotel and get involved in all the crazy goings-on.

Mobile data and a range of different games would have meant this storyline could never have taken place and Jack might have got an unbelievably high score on Candy Crush. 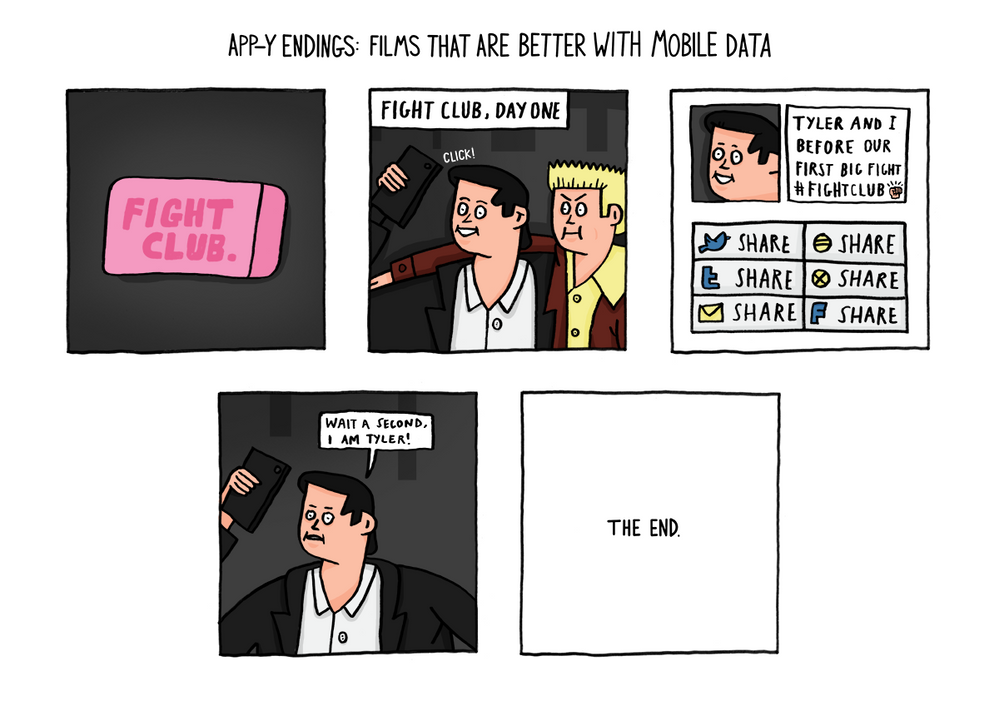 When an office worker suffering from insomnia befriends a slippery soap maker, the two move in together and start up an underground fight club as a form of aggressive therapy. It’s only at the end of the film the Narrator realises that Tyler is another part of him and they are actually the same person.

This whole story could have been avoided if Edward Norton’s character had simply taken a selfie of himself with Tyler Durden after a fight and uploaded it to Facebook or Instagram using his mobile data.

Upon seeing the picture, he would have realised that there was no one else in the photo – that Tyler didn’t exist and he had just been talking to himself the whole time. Awkward. 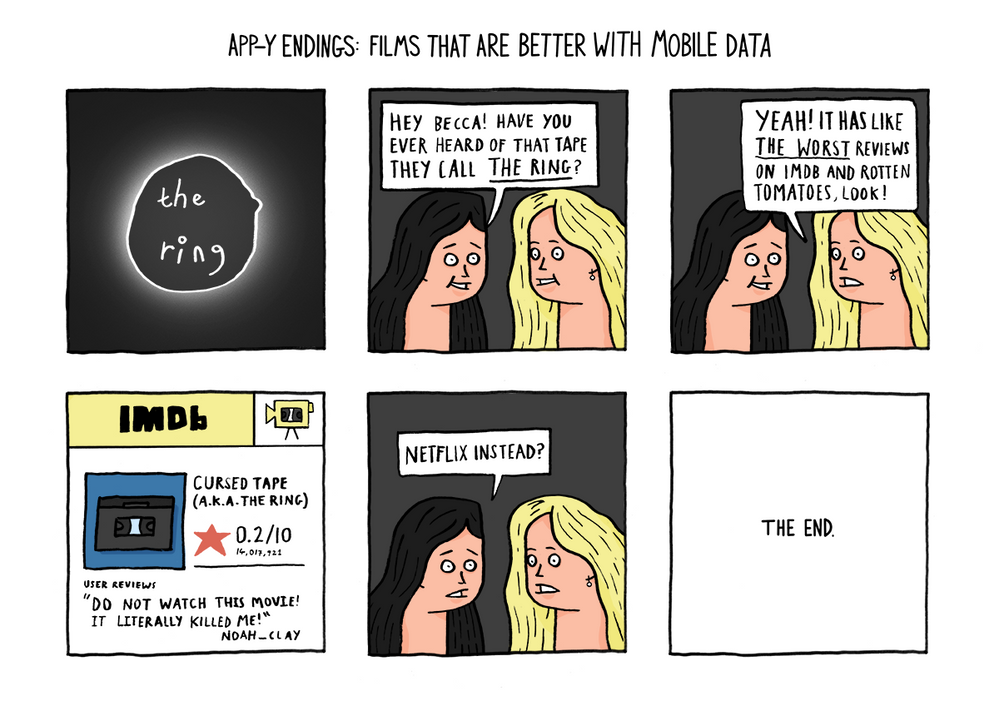 The Ring charts the horrifying journey of a cursed tape – a vintage piece of technology that unleashes a raven-haired witch who then inflicts a grizzly ending on anyone who dares to watch it.

If any character in The Ring had grabbed a smartphone at the start of the film, a quick scan of IMDB and Rotten Tomatoes would surely have put them off digging the video recorder out of the attic. The production values are low, the sound is shaky, and, not to mention – you could die if you watch it.

The terrible reviews online would have made watching the tape sound about as appealing as sitting through root canal surgery, so the body count on The Ring would almost definitely have dropped down to zero. Instead of spending a terrifying night fighting off the advances of the spookiest kid alive, the characters could instead have spent a night curled up watching Netflix. Much better.

Jingle All the Way 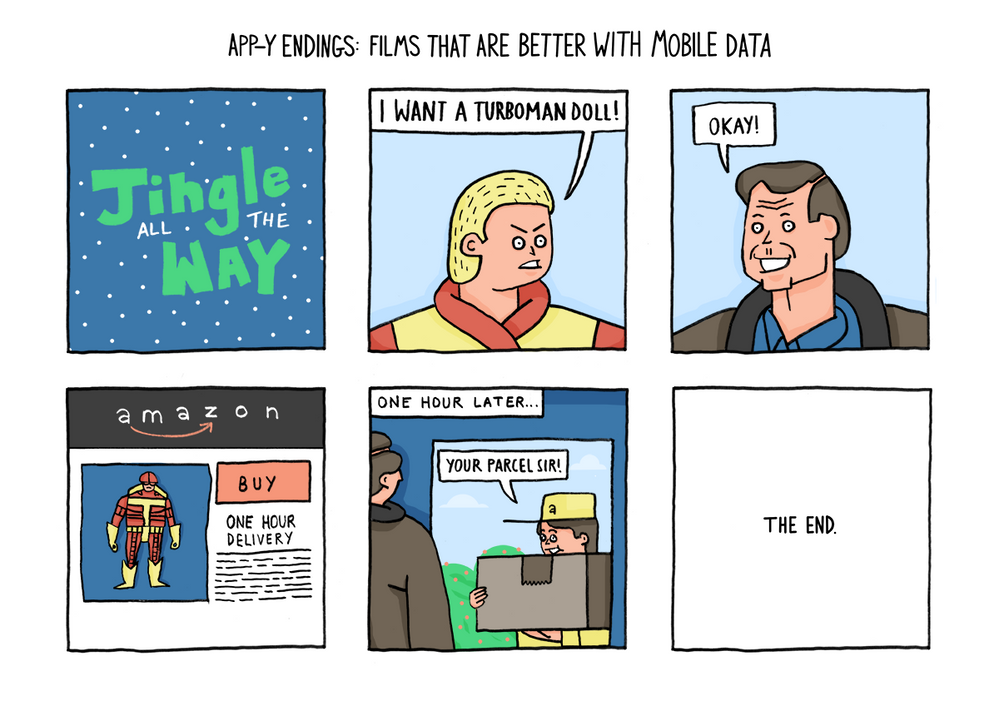 When Howard Langston misses his son’s karate graduation, he is determined to get him an action figure of his favourite TV hero, Turbo Man, for Christmas to make up for it. Unfortunately for Howard, all the shops are sold out and he spends the whole film trying to find one.

Just think how much easier mobile data would have made Howard’s shopping experience! He could have looked online using his phone to see which stores had availability. Apps like Amazon and eBay would have been a good place to start – especially with next day delivery available through Amazon Prime.

Once he had found an available Turbo Man, he wouldn’t have needed to dash for his wallet, he could have simply paid through PayPal from the comfort of his sofa.

What other films can you think of?

What films can you think of that would have turned out much better for the characters if they’d had a smartphone and some mobile data? Join in the conversation on Twitter with the hashtags #plusnetmobile or #appyendings and tweet us at @Plusnet. In need of more smartphone data? Check the latest Plusnet Mobile deals.