We're ready for the Beeb's iPlayer

We're ready for the Beeb's iPlayer

As some people may be aware the BBC will be opening up its iPlayer service for a large scale trial on Friday, details are available here. At PlusNet we've been taking part in the initial closed trials to ensure that the service is fully compatible with our traffic management systems. We've had the iPlayer on our radar for a while and this Friday has been firmly noted on our traffic management roadmap since the launch date was announced. We are pleased to report that no problems were seen using the iPlayer on our network. For those that don't know the iPlayer allows people in the UK to watch BBC programmes from the previous 7 days. There are limitations, it currently only works on Windows XP for example; Mac and Vista versions are planned for a later date. This has stirred up some controversy as can be seen here. In order confirm that the iPlayer works as expected I conducted a final bit of testing before the launch this afternoon. My tests were done using a PC running Windows XP and a Voyager 105 USB modem. The line syncs at a speed of 6.6Mbps and the account type used was Premier Option 1. These tests were done between around 3:30pm and 4:30pm. Previous testing has been done at other times of the day including evening when the network is busy and overnight. I downloaded three shows to check the speed of the downloads, to run wireshark captures to check the traffic is being identified correctly and to look for any other obvious problems that PlusNet customers might experience. My Experience Installing the software was fairly straight forward and no configuration was needed on our test PC other than checking the Windows Firewall settings. Some people using routers may need to forward the port (1948) on their router and/or firewall. It's also a good idea to run a Windows Update before installing the software and rebooting afterwards before trying to download anything. The speeds seen on the downloads seem pretty good. The first I downloaded was last night's Mastermind. This started off quite slowly, around 10-20KB/s. I was a little concerned at first that something wasn't right so fired up Wireshark to get a grab of the traffic. It firstly gave a possible reason for the speed; it looked like I was only downloading from one peer, the BBC themselves. Leaving it downloading for a few minutes a few more peers started to appear and the speeds increased to around 200KB/s. Fortunately the Wireshark grab also showed that the traffic was being properly identified as gold traffic, as per this screengrab:

The second show I downloaded was Saturday's National Lottery Draw, I selected this because it was a fairly small file size and hoped because it had been up a little longer there'd be more peers. My hunch was right, after about 30 seconds it was downloading around 300-400KB/s. The speed was fluctuating a little, as you'd probably expect from a P2P download that is dependent on the upload speeds of others. The third show I chose to download was an episode of Bargain Hunt, this seemed to give the best speeds of the three often hitting about 480KB/s. Again the speeds were a little spiky as you can see here in a DuMeter graph: 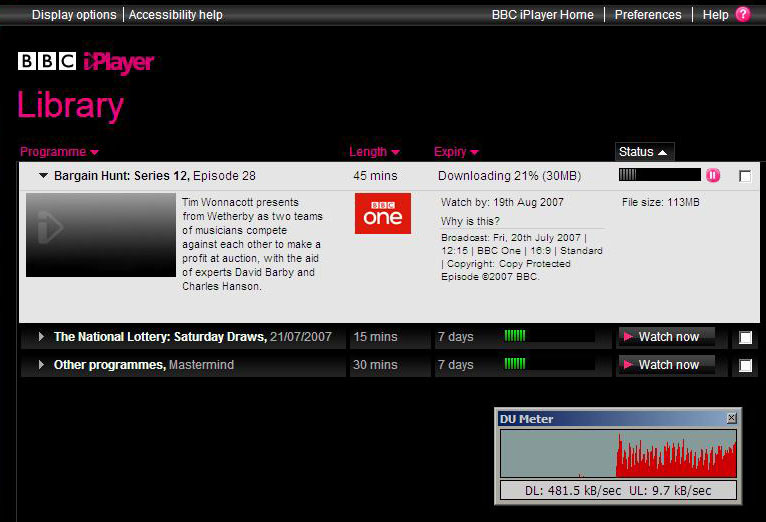 This was a 45 minute show with a file size of about 120MB, on our test line it took about 10 minutes to download. One important thing to note is that the iPlayer can upload data whenever it is switched on. My tests today showed small amounts of upload but likely because of the closed nature of the initial beta trial there aren't that many people downloading so not much uploading going on. It will be interesting to see if this changes after Friday when more people are bound to start using it. We will of course keep a close eye on the performance when the trial opens up and also monitoring any impact it has on the make up of traffic on the network as a whole. With the school holidays we are already seeing an increase in gold and titanium traffic during the day as per this post. We have set the priority as gold and customers will see usage showing up as "streaming" in the View My Broadband Usage tool. One of the beauties of the iPlayer is that you can download the shows at one time to watch at another (some shows can be watched up to 30 days after downloading) so you can always set the downloads going when you go to bed so they download overnight. I'm already predicting the Wednesday's Top Gear special will be one of the most popular downloads when it goes live on Friday. Dave Tomlinson PlusNet Comms Team