The iPlayer is live and it is good

The iPlayer is live and it is good
Topic Options

The iPlayer is live and it is good

We've spoken before about the iPlayer here and here and things have changed a fair bit since then. First of all the BBC in response to concerns that the download version of the iPlayer isn't cross platform compatible have built a second iPlayer which uses Flash and streams the shows rather than downloads them. That means you can click the play button and watch the show there and then rather than having to wait for the download to complete. Secondly is out of the beta phase and is now a live product and is being promoted on the Beeb as a way to catch up on shows that have been missed. Some interesting facts have been released today about the iPlayer, first of all over a million people have used iPlayer since launch on Christmas Day and between them watched over 3.5 million shows. The top 10 shows are also listed here. Looking at it from a PlusNet perspective we've seen quite a big take up and an increase in iPlayer traffic. Below are two graphs showing the last 45 days. The first is the graph of "network services" traffic and the second is "streaming". Network services includes things like ping and tracert but until last week also included Flash, which meant that iPlayer Flash traffic showed in the network services graph and thus in "Other" in View My Usage on the portal. The priority of the traffic was correct (Gold), it just showed in the wrong place on the usage breakdown page. As such we moved the traffic into Streaming last week which is why you see a sudden decrease in the network services graph and an increase in streaming. 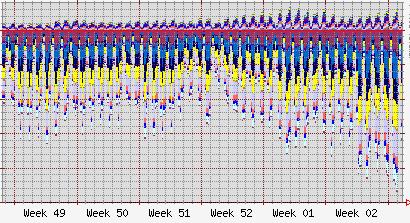 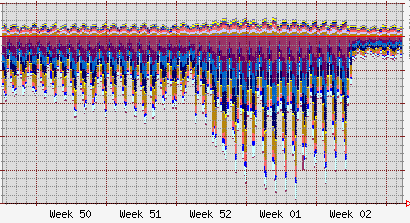 What the network services graph though shows quite clearly is the increase in traffic from the Flash version of iPlayer. It's going to be interesting to see how this continues to be used. A lot of the shows in the top 10 were Christmas specials like Doctor Who, Extras and Catherine Tate so were people watching them because they missed them being away or otherwise occupied during the holidays? Or were they watching them again or will we see similar numbers for for more regular shows. With shows like Sense and Sensibility in the top 10 as well as Eastenders does that mean that iPlayer already broken through to the mainstream? Or are we misunderstanding the TV show tastes of the geeks?