The Ultimate Map of Yorkshire

The Ultimate Map of Yorkshire

While Yorkshire should really be celebrated every single day of the year, on the first day of August the UK’s biggest county can truly come together and celebrate everything that makes it great – it’s not called “God’s Own County” for nothing.

There’s a lot more to Yorkshire than its fabulous dialect, delicious Yorkshire puddings, and stunning moorland, so we’ve put together the map below to highlight some more of the fantastic things this county has to offer: 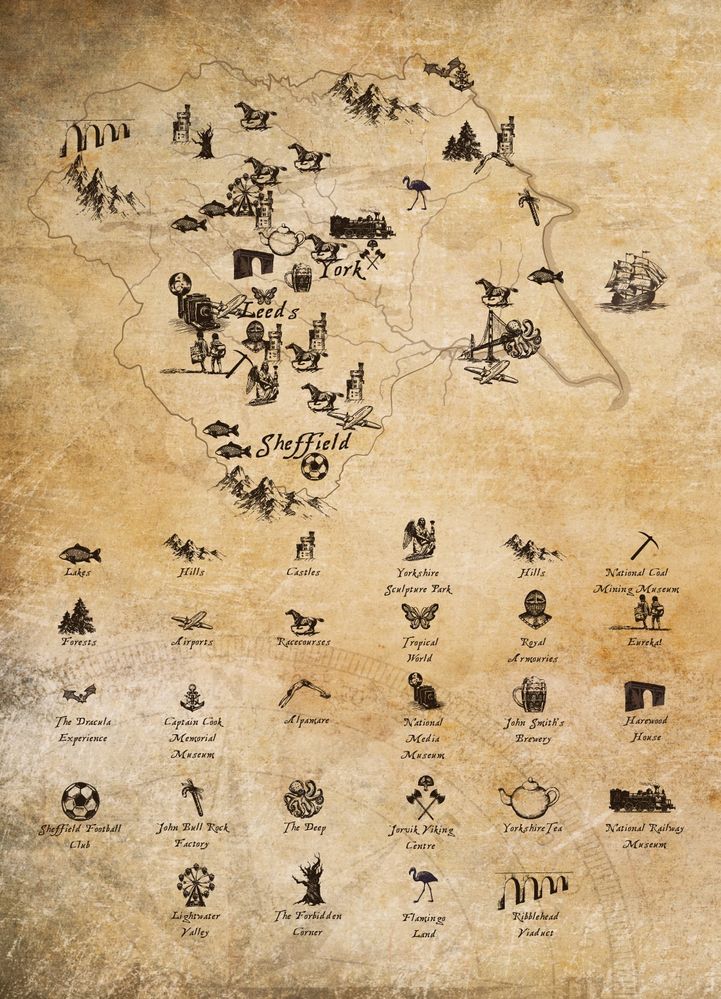 The scenery in Yorkshire is breath-taking and there are tonnes of stunning hills, lakes, rivers and waterfalls to enjoy. Whether you like walking, cycling or simply enjoying the views, there will always be somewhere new to explore in Yorkshire.

There are many historical sights to check out, in the beautiful county of Yorkshire, whether you’re in a town or out in the countryside. Leeds Kirkgate Market is the biggest covered market in Europe and was the founding location of Marks & Spencer, which originally opened in the market in 1884 as a penny bazaar.

Yorkshire is also home to Sheffield Football Club, which is the oldest independent football club in the world (formed in 1857), and the first ever film was shot in Leeds in 1888. Louis Le Prince filmed moving picture sequences called “Leeds Bridge” and “Roundhay Garden Scene” years before the likes of Lumière and Edison released their work.

There are so many fantastic brands that call Yorkshire their home, including Terry’s in York and Yorkshire Tea in Harrogate, and of course you’ll find us in Sheffield. Pontefract is home to the only Haribo factory in the UK and Asda’s head office is in the centre of Leeds.

If you have a sweet tooth, then you’ll be interested to hear that Fox’s is based in Batley and Rowntree’s can be found in York. When it comes to a nice Yorkshire pint, there’s the Black Sheep Brewery in Masham and John Smith’s in Tadcaster, so Yorkshire really has got food and drink covered.

There’s so much to see and do in Yorkshire, you could never fit it into one trip. Some of the highlights include the Jorvik Viking Centre in York, the National Media Museum in Bradford, and the Royal Armouries in Leeds city centre.

For those looking to get out and about, the Ribblehead Viaduct is a must-see, the Forbidden Corner is great fun, and Harewood House has some beautiful gardens to walk around. If you have kids, then Eureka! and Tropical World are the perfect places to go.

There’s so much more to Yorkshire than we could possibly fit in one article – what’s your favourite place to visit in this glorious county? Let us know on Facebook or Twitter! And take a look at how Plusnet's been celebrating Yorkshire Day this week!