Here at Plusnet, we're proud of our Yorkshire heritage, and with Yorkshire Day coming up on 1st August, we're celebrating all that makes Yorkshire great. We'll be joining forces with the people of Yorkshire for our emoji campaign, and stirring up the age-old dialect debate (bread roll? teacake? cob?) for our Business Breakfast competition. Come and join us on Social! #Plusnetdoesyorkshireday

This coming Monday is Yorkshire Day, and you can join us in celebrating with our very own Snapchat geo filter. We’ll be sending out posts on Social asking people to send in their snaps to our Twitter account @plusnet (make sure you use the #Plusnetdoesyorkshireday hashtag!).

What better way to celebrate Yorkshire Day than for Yorkshire to get its own emoji? We’re asking our followers to vote for their favourite from the following, all inspired by Yorkshire’s proud heritage: a Yorkshire terrier, a white rose, a flat cap, a Yorkshire pudding and a teapot in a cosy.

We’ll be announcing the winner on Social on Monday (Yorkshire Day itself, naturally!) and we’ll then launch a petition with Unicode to get the winner included on the official emoji keyboards for iPhone and Android, along with the likes of the following:

Plusnet’s most senior Yorkshireman, CIO Stew Welbourne said: “Yorkshire Day is a time for us to celebrate our distinctive identity, and what better way to do this than to launch our very own set of emoji based on Yorkshire’s most famous traditions.

“With the existing American-themed emoticons and the recent creation of ‘Londonmojis’ we felt the people of Yorkshire deserve their very own official icon.”

On social this week, we’ve also been giving businesses in Sheffield and Leeds the chance to win breakfast on us. Stirring up the great bread roll debate (we call them breadcakes here, but we hear they’re also known as tea-cakes, barm cakes, cobs, baps and stotties, among other things), we’re asking our followers to comment on social with what they call them. The winning companies will win breakfast delivered to their offices on Monday in a Plusnet-wrapped van. 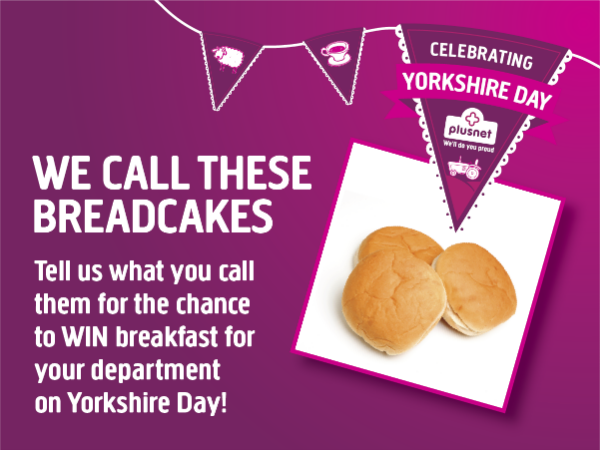 So there you have it! If you want to be part of our campaign to get Yorkshire on the emoji map, or you’d like to win breakfast for your company on Monday, head over to our Facebook and Twitter to cast your votes. We’ll see you there!