Moving to London to find jobs and success has become a rite of passage for many British people. While the financial centre of the UK is undoubtedly full of opportunities, other areas are beginning to challenge the capital’s popularity. Around the country, there are thousands of business owners shirking tradition by choosing to set up a business in their own home towns.

We surveyed 1,000 business owners from around the UK who had set up businesses in the past 5 years. 72% of all those we surveyed had set up businesses outside London, suggesting a move to the capital isn’t always on the cards for this new generation of entrepreneurs. Staying closer to home isn’t just the popular choice, it seems to be generating higher turnovers too.

SETTING UP AT HOME

Our survey revealed that 67% of business owners who have set up businesses in the past 5 years have done so in the city or area they are from. That means of every three start-ups, two are run by locals. This ‘regional boom’ is a strong indication that start-up entrepreneurs are recognising the opportunities presented by locating away from the capital – no matter where in the country they are. 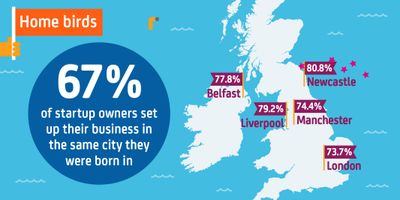 67% of business owners set up their business at home.

Newcastle born entrepreneurs are most likely to set up in their home town – with 81% of Geordie business owners we spoke to deciding to set up in the shadow of the Tyne bridge. Liverpool is just behind in 2nd, with 79% of Scousers choosing to base operations in Merseyside. This data suggests a strong loyalty by Northern business owners to their area. While transport innovations like the HS2 high-speed railway aim to link the Northern Powerhouse with London by 2033, business owners are getting on with the hard work in the cities they know best – and it’s having a positive effect on income too.

Familiarity is key to the success of new start-ups and where’s more familiar than home? The business owners we spoke to appear to be utilising the connections and knowledge they have in their local area to build more successful businesses – with higher turnovers. 86% of respondents with a company turnover of £400,001 - £500,000 said that their business is based in the same area or city they were born in. Only 51% of respondents with a company turnover of £50,000 and under said the same. 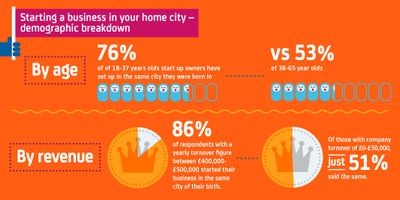 The long-term future of any business will rely on more than local connections. But the evidence shows that certainly in the short term, the benefits of setting up in the area you were born can have a real impact on your bottom line. So, what attracted entrepreneurs to set up at home in the first place?

There are obvious benefits to setting up a business in the area you were born in – and it isn’t just because you can nip home for Mum’s Sunday lunch. Understanding your market is an important aspect of any successful business. Growing up where you’re based gives you an insight into your local market that money can’t buy. 58% of business owners we spoke to said that ‘knowing the area well’ was a deciding factor in setting up their business in their home city – suggesting many new business owners are using that knowledge in order to further their business. 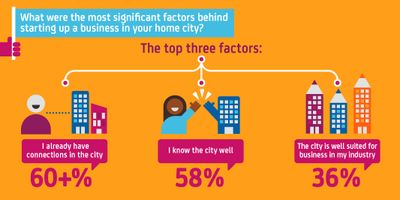 Knowledge of an area inevitably leads to business relationships with locals. 61% of business owners said the reason they set up at home was that they already had connections in the city. In cities like Liverpool, these connections can make all the difference. Gemma Sutcliffe from The Compliance Workbook points to the city’s strong support network for local business, including the Liverpool City Region Local Enterprise Partnership. Plus, the city excels in accelerator programmes, providing new start-ups support with workspace, equipment and mentoring:

“Start-up accelerators are one of Liverpool’s strongest assets and there is a great deal of support for entrepreneurs. We are a fairly new start-up ourselves, only opening our office this year, so the business support and active community available in Liverpool is great.”

Whether it’s suppliers or a local accountant, having existing relationships means you have fewer barriers when you’re starting a business. These first few years are vital for any business and having a support network in your city means a lot – especially for young people.

YOUTH IS LEADING THE WAY

With stronger connections to family – and the security of Mum and Dad – it’s understandable that younger entrepreneurs like to stick with what they know. 75% of business owners aged 23-37 we spoke to have set up in their home town, suggesting just how important that support network is. One explanation could be that so many ‘millennials’ are simply sticking around in their family homes longer. It’s estimated that 1 in 4 young adults now still live with their parents, a record high.

Only 39% of those aged 53 and over said they had set up at home, indicating a significant difference in attitude between the two generations. In the past, older business owners may have had to relocate in order to maximise on the opportunities that the Capital brings. Now, younger entrepreneurs don’t feel like they have to move away to forge their own path in the business world – it’s all on their doorstep.

Whether it’s the innocence of youth or a different perspective, younger entrepreneurs appear to be so much more inspired by their local area than their older counterparts. 74% of 22-37-year olds said that their home town had a positive impact on their decision to become a business owner. More can be done to help encourage growth and fund culture in Northern towns and cities, but high streets in 2018 are almost unrecognisable from the ones that older generations knew. Perhaps as a legacy of this, only 45% of over 55s felt inspired to start a business by their local area.

Again, it’s a northern city, Liverpool, which comes out on top for inspiring its business owners. 79% of Scousers said their city had a positive impact on their decision to start-up. The former capital of culture has developed into a thriving, cosmopolitan city and for some, such as Hyperion Search’s David Hunt, that’s the most significant factor:

“Liverpool, whilst geographically small, has so many historical attributes, and it’s not just the Beatles and Liverpool FC. We’ve got a wealth of museums, art galleries, listed buildings and two cathedrals.
“It has an amazing independent food, drinks and shopping scene, as well as a wonderful mainstream shopping area. For me though, best of all are all the parks, open spaces and the beaches.” 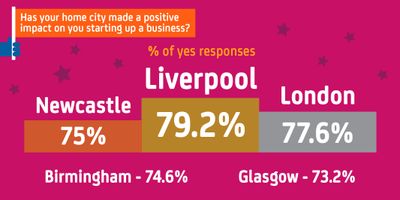 UK Cities having a positive impact on start-ups

With a new generation of driven entrepreneurs dedicated to their local areas, our results show that the regional boom is alive and kicking. Business owners around the country are making the most of existing connections and knowledge to drive great growth and increase turnover in their businesses. Inspired by the vibrant towns and cities they live in, it is young entrepreneurs who are at the forefront of this start-up ‘revolution’. From Newcastle to Norwich, there has never been a better time to set up shop at home.

Are you a UK-based start-up owner? How has your local area inspired your business decisions? Join the conversation on Twitter @Plusnet.

Download the PDF infographic by clicking on the link below