Poos, Aubergines and Avocados: What the Public Tweets to Famous Faces

Poos, Aubergines and Avocados: What the Public Tweets to Famous Faces
Topic Options

Poos, Aubergines and Avocados: What the Public Tweets to Famous Faces

Since they first appeared in Japan in 1999, emojis have quickly established themselves as part of everyday universal communication. To celebrate our favourite way of communicating online, we tracked the emojis tweeted at some of the world’s biggest names over a 6-month period to find which emoji represents them in the eyes of the public. From politicians to radio hosts, check out the results in our infographic below. 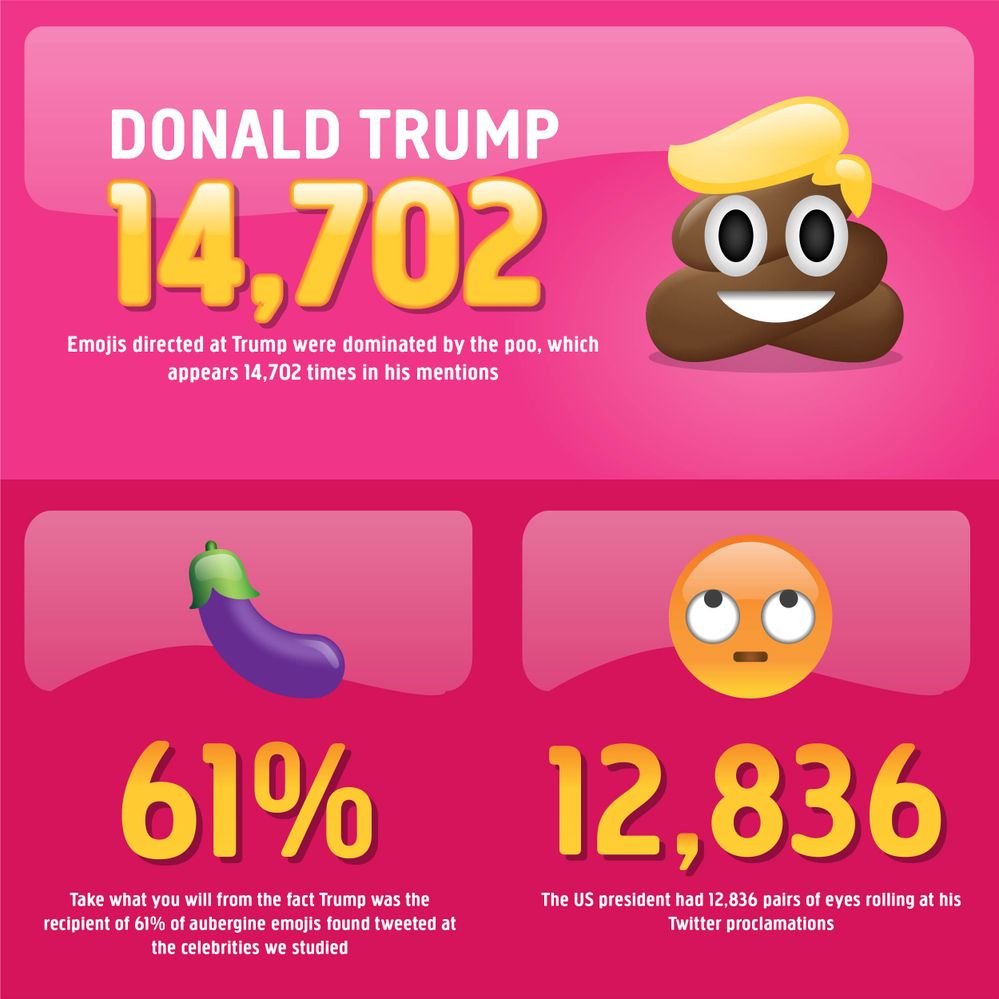 Donald Trump received by far the most emojis, with 482,809 fired at him during the period we tracked – perhaps because people are lost for words at the President’s proclamations.

The big emojis for Trump were from the negative end of the spectrum, with the highest numbers being for the poo (14,702) and eye roll (12,836) emojis.

Trump also ranks top for the middle finger emoji, receiving 68% across the board.

Trump’s supporters were also vocal on Twitter. The US president received 6,376 fist bumps and 9,486 winking faces on Twitter in the last six months. 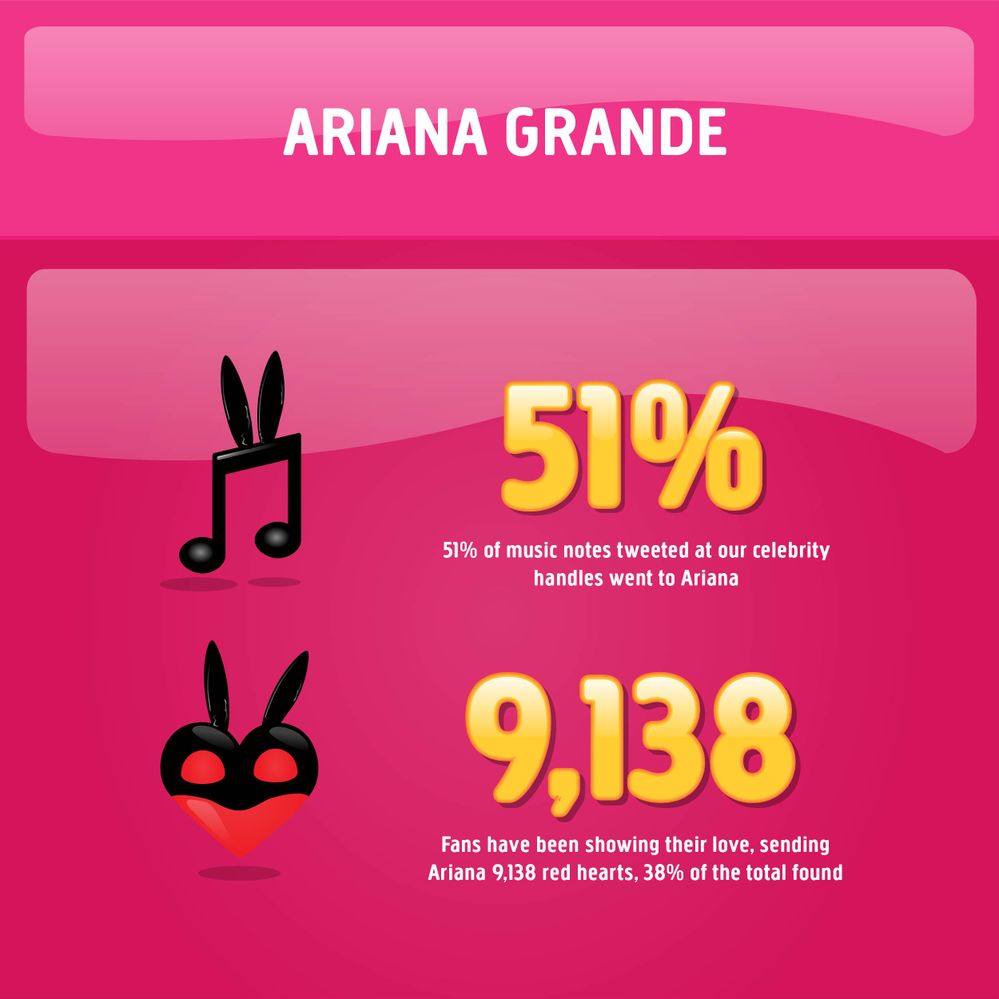 Other celebrities had more positive reactions on Twitter. Ariana Grande has overwhelmingly supportive responses from users, with outpourings of love being directed at her handle.

9,138 red heart emojis and 3,046 hearts with cupid’s arrow piercing them were sent to the star, amounting to 28% and 37% respectively of all these emojis collected in our study.

Her engagement to comedian Pete Davidson could account for some of the hearts she has received.

Grande also ranked top for music notes directed at her Twitter handle, a total of 3,046 – 51% of all found in our research. This is despite being analysed alongside global music superstars Beyoncé, Rihanna, Britney Spears and Kanye West. 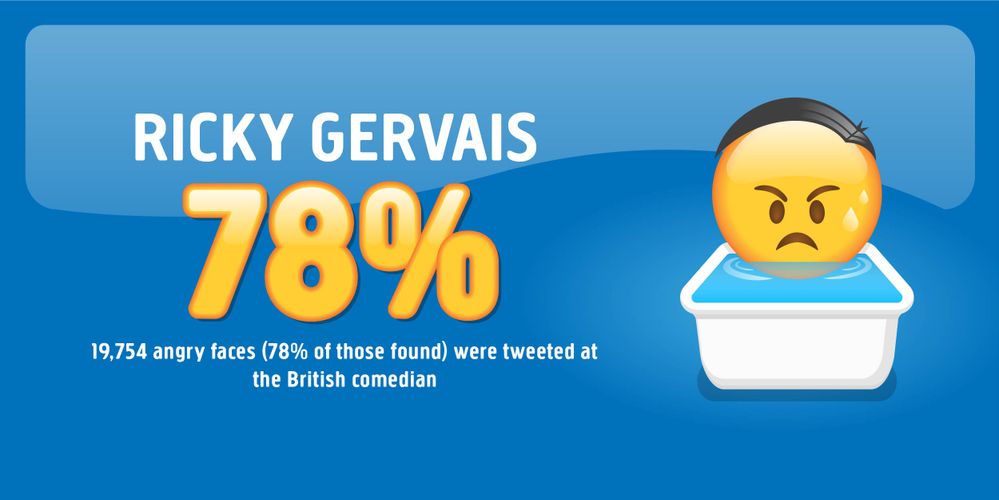 The British comedian had 19,754 angry faces directed at his Twitter account, accounting for 78% of all that were tracked in our study.

This is despite being compared to controversial figures including Donald Trump and Piers Morgan (who seems to provoke embarrassment more than anger in emojis).

Gervais is not afraid to address controversy on his Twitter account – tweeting frequently about atheism and Donald Trump. Politics and religion are sensitive topics, so may well provoke angry reactions.

Another strand which dominates Gervais’ Twitter feed is his love of animals. He is a huge supporter of animal rights. Users often send angry faces in response to these posts, suggesting the anger expressed at Gervais’ Twitter handle is directed at the perpetrators of this abuse, rather than Ricky himself.

Taylor Swift’s top emoji is unsurprisingly the snake. After having her Instagram comments flooded with the emoji following a feud with Kanye West, Swift and her fans took the snake as a symbol. The animal now features in a lot of comments from both lovers and haters of Taylor.

Britney Spears’ top emoji is a clear link to her talents, as she ranks top of the dancing girls list. Beyoncé’s top emoji, the flying money, alludes to her wealth – a major theme in her recent collab album with husband Jay Z.

One of the more niche trends in our data relates to Radio 1 host Nick Grimshaw, who ranks highly for the avocado emoji. This is probably due to a piece he did on the Radio 1 Breakfast Show, in which he rang restaurants to see if they would accept avocado as a form of payment.

This came shortly after Virgin Trains began a special offer for “Millennials”, who could get a discount if they presented an avocado with payment.

How We Did It

Data analysts, Pulsar, worked with us at Plusnet to track the Twitter accounts of celebrities who have a high profile on Twitter. From the data gathered we picked out the number of each emoji that was tweeted at our individual celebrities.

We also worked out the percentage of each emoji directed at each celebrity in comparison to the others analysed, which gave us a new layer of information. For example, Donald Trump received 1,230 aubergine emojis, a tiny number in comparison to the 14,702 poos he received. If you look at the figure as a percentage, however, you can see that 61% of all aubergine emojis found were directed at the US president.

To ensure our results were revealing, we had to select which emojis we wanted to track. Data showed that the standard smiling, laughing and sad faces were equal across the celebrity accounts we tracked. As such these have been excluded from our results.