How accurate are sci-fi's future tech predictions? Part one: 1st-5th

How accurate are sci-fi's future tech predictions? Part one: 1st-5th

Sci-fi is one of our favourite types of film. Often the playground of futuristic ideas and off-the-wall technologies, it got us thinking; how accurate are sci-fi’s technological predictions of the future?

To find out, we shortlisted ten of the genre’s most popular titles and their tech predictions. Then, we asked a relevant expert how accurate that prophecy is compared to reality.

You can find positions ten to six in part two, but here are the films we ranked first to fifth. 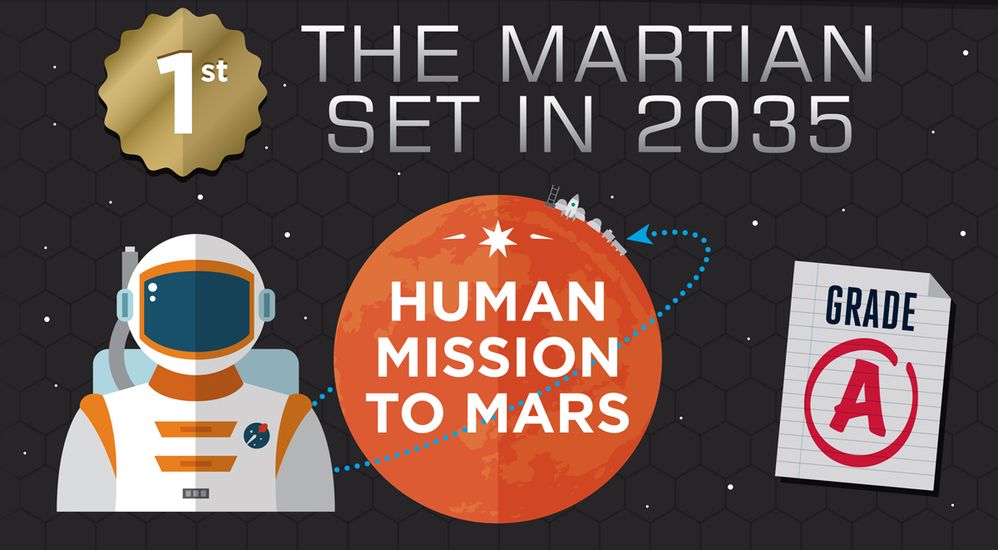 Human mission to Mars - A

The film depicts a human mission to Mars in less than 20 years. Laura Forczyk, a space industry analyst who specialises in emerging human spaceflight, gave the prediction an A grade based on the realism of the time frame:

“The mission science, engineering, and survival technology are among the most realistic of all popular sci-fi. The spacecraft, spacesuits, tools, and mission objectives are just like what we'd expect an early mission to Mars to look like.

“In a case of life imitating art, numerous NASA and university research projects to study growing food in Martian dirt were inspired by the Martian. NASA and private industry such as SpaceX hope to send the first human expeditions to Mars in the coming decades.”

Superhero films aren’t known for the realism of their tech, but in Darkman, film convention is turned on its head. The film stars Liam Neeson as the scarred phantom Darkman, looking to avenge the crime bosses who have wronged him. 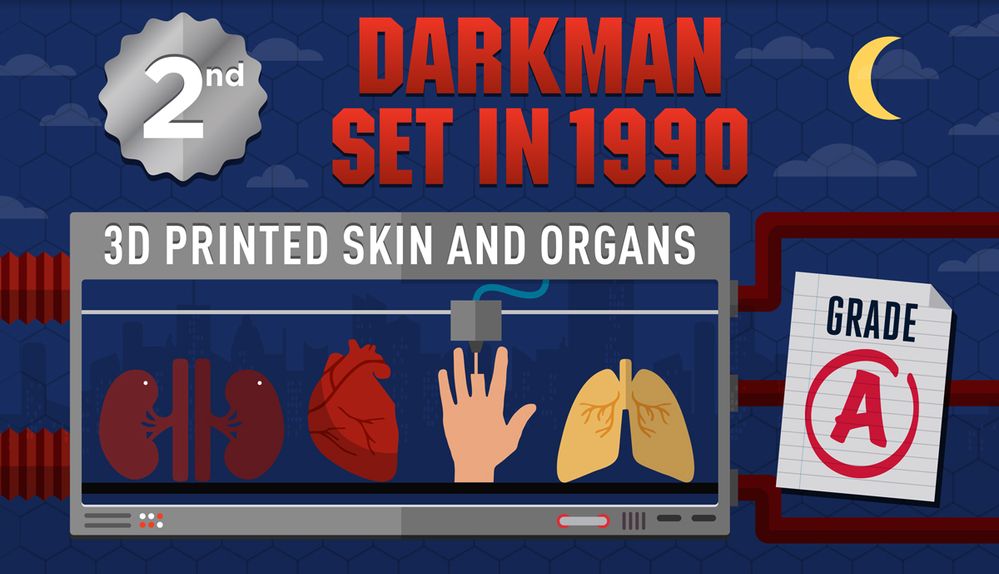 3D Printed Skin and Organs – A

Central to Darkman’s story is the use of 3D printing to create human skin. Two decades later, the tech shown is only now becoming a reality. Anne Zieger from The Healthcare AI Institute confirms:

“It's now possible to 3-D print many human organs, including skin. This was not even remotely possible with early-90s computing technology, which makes the film's prediction somewhat remarkable.”

When we discuss sci-fi classics, and Stanley Kubrick’s space epic 2001: A Space Odyssey must be included. Whilst being an incredible film, it also makes a bold prediction about the rise of Artificial Intelligence. Central to the story is “HAL”, an online supercomputer able to hold conversations and, seemingly, rationalise its decisions. 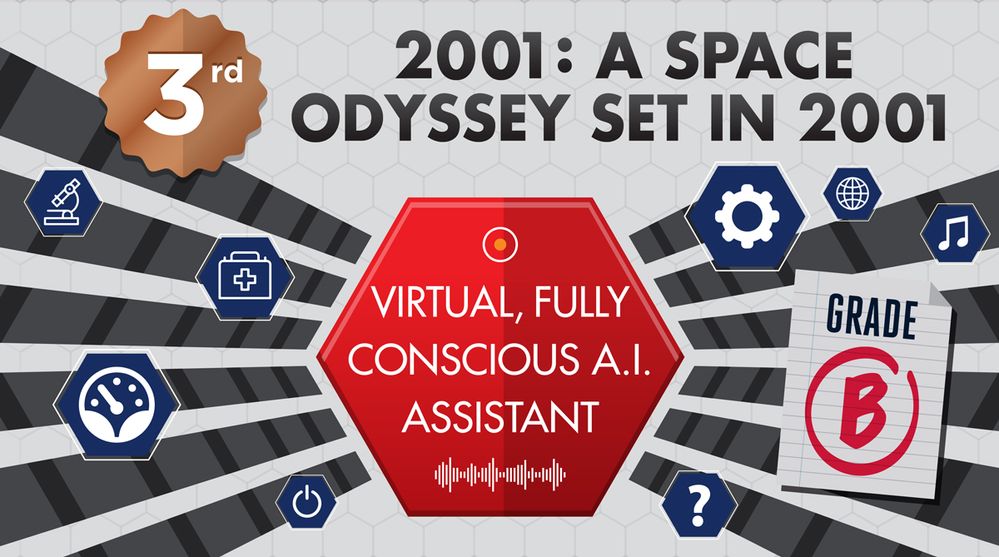 But how close is the film’s creation when compared to reality? We asked Peter Scott, an A.I. author and ex-computer engineer at NASA:

“We have already surpassed the level of HAL in the abilities of our A.I. to both express and read human emotion."

“The biggest problem with HAL as a prediction of the future was setting it in the year 2001, when we had not yet even achieved continuous speech recognition. It is telling that 2001 shows us how powerful HAL is by showing him beating a human at chess. We now know that was a much easier accomplishment (achieved in 1997) than any level of artificial general intelligence.”

In Paul Verhoeven’s hit Total Recall, humans colonise Mars – this is the first of two tech predictions we analysed. 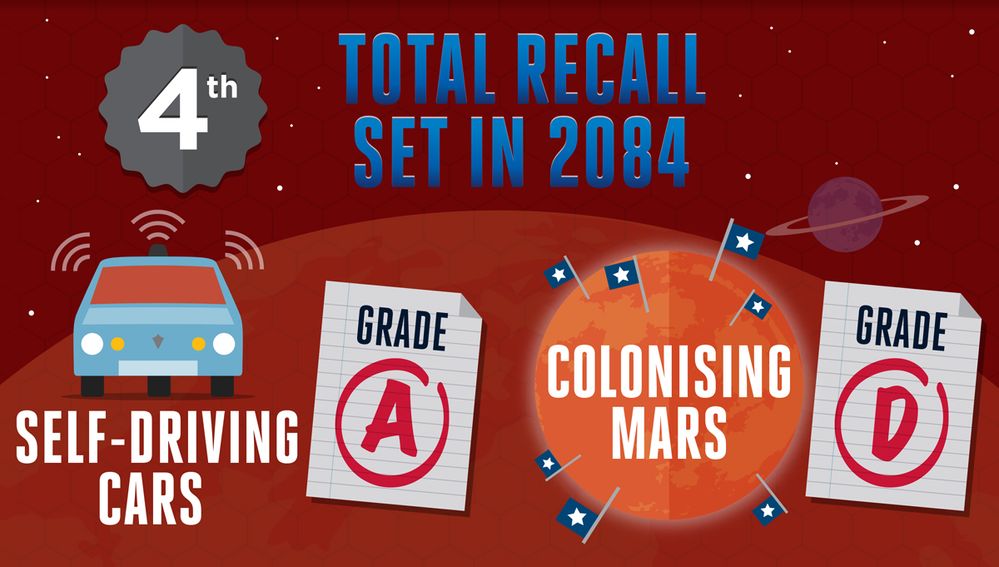 Laura Forczyk gave the film’s depiction of a Mars-based society a D-grade, describing the habitats, human settlements, and terraforming (terrain) as “unrealistic”:

“Within the next 50 years, the first astronauts will explore the red planet for the first time. It will be at least another century after that milestone before spaceflight to and from Mars on a large scale will become commonplace.

“With larger human settlements, human society as shown in the film will form. Only then would the need for terraforming arise and begin to be tested.”

One miss is balanced out with a hit. Total Recall includes the self-driving car. Jon M Quigley, an automotive product developer for 30 years, gave the film’s prediction of autonomous cars an A:

“To some degree we already have sub-systems transforming to self-driving with extensive driver support systems like automatic breaking and systems that keep the vehicle within the lane.

“Self-driving cars will be here in the next decade, so we have a good number of years to spare.”

Rivalling 2001 for Virtual A.I. supremacy is Her, a 2013 Spike Jonze film in which Joaquin Phoenix falls in love with an A.I. that lives inside his smartphone-like device.

Named “Samantha”, the A.I. displays human emotions such as empathy and love. Its C+ grade comes from being a little too advanced for reality, as Peter Scott explains:

“All the hardware depicted in this movie currently exists, but we are several major breakthroughs away from developing machine consciousness.

“The first level three A.I. assistant (able to consider context and respond to different and unexpected inputs), on a scale where Samantha inhabits level five (strategic level intelligence), has just been released. It is able to fool some people into thinking they are talking with a human being in certain narrow contexts, such as making an appointment for a haircut or ordering a pizza.”

Head to part two for more from our experts on five more of sci-fi’s greatest tech predictions.

Agree with our experts thoughts or think they got it wrong? Head to social media and let us know @Plusnet.