Building on part one, we grade some of the best sci-fi predictions made by our favourite sci-fi films. This time, our experts were less impressed by their accuracy.

6. BACK TO THE FUTURE

The Back to the Future franchise is the king of tech predictions. We asked experts about five different pieces of tech you’ll catch during Marty McFly’s adventures, with very different results. 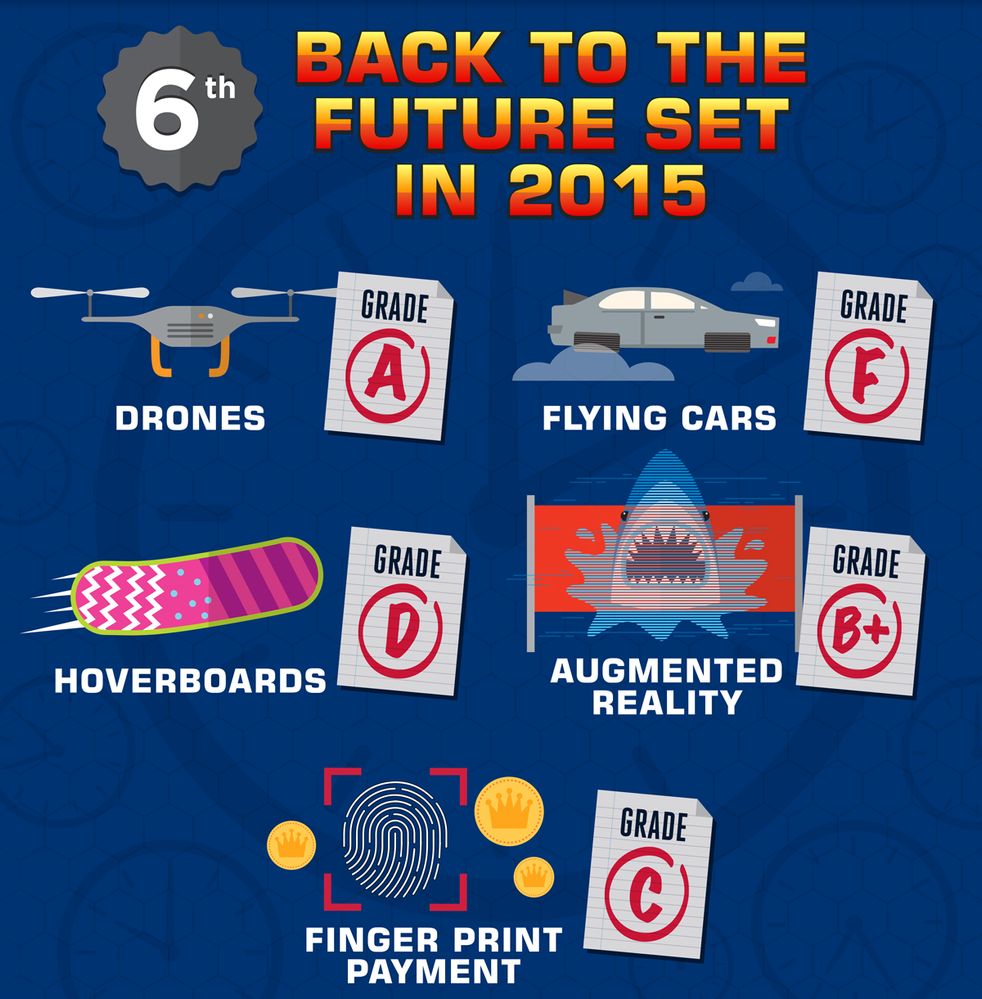 At the bottom end of the scale, flying cars. Automoblog columnist Tony Borroz doesn’t think the tech will take off within the next 100 years, citing the danger it could bring to our skies.

“Besides the technical hurdles - overall weight, power density of fuel sources - consider this: your morning commute. Think of all the crazy oblivious stuff you see your fellow drivers do on a drive into work. And now you want to give people another dimension to deal with?

Borroz also spoke of the technical difficulties in creating a hoverboard when giving the prediction a D grade.

“A magnetic levitation system requires a whole bunch of stuff - supercooled magnets, for one thing - that is not amenable to fitting into a skate deck that can be lifted by a human.”

Dmitry Garbar from software developers Beltisoft gave a middling grade for BTTF’s use of fingerprints to make payments:

“It’s already partially implemented. The mobile app of my bank uses a fingerprint as an authentication factor. We are one step away from this technology being implemented in payment terminals, rendering plastic cards obsolete.”

Inventor and Futurist Mark Pesce graded the film’s use of Augmented Reality, a technology that superimposes a computer-generated image onto a user's view of the real world:

“It got the technology right, but the version in the film is more refined than what we had in 2015. It’s probably only where we’ll be by 2025.”

The film did nail one of its predictions. Drones are well established in consumer technology, aligning perfectly with BTTF’s 2015 timeline:

“Even in 1989, you could see that this was going to be "a thing" we could figure out very quickly.” Tony Borroz commented.

“What the director did was take what was already happening, improve it, and make it more ubiquitous.”

Matt Damon returns with Elysium, a 2013 film set on a space station for the wealthy while the rest of the world lives on a decimated Earth. 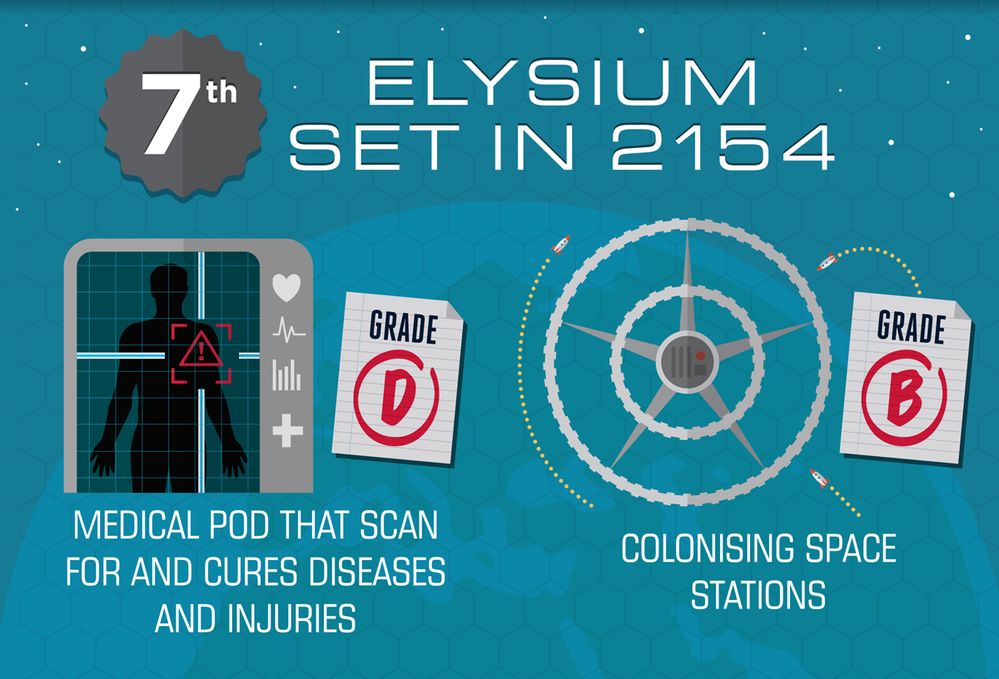 Leaving Earth for pastures new is a popular subject of interest in sci-fi stories. Elysium takes us into space, and computer engineer Rick Rosko draws comparisons with today’s reality:

“Humans have lived and worked continuously on the International Space Station for the past 18 years.”

“Elysium only imagines one successful space station when in fact there will be many, at varying from luxury to economy.”

In Elysium, you can slide into a special medical pod and it will identify and cure any disease or injury. For Anne Zieger, this has some way to go to become a reality.

“But unless medical technology changes dramatically, we're not on a path to create a single machine that examines a patient, conducts appropriate lab tests and scans, interprets them accurately and manages treatment.”

Next, we jump into 2002’s Minority Report, where Tom Cruise hops through time to arrest murderers before they commit the crime. We’ve left all the time travel stuff behind, sticking to a more realistic tech prediction. 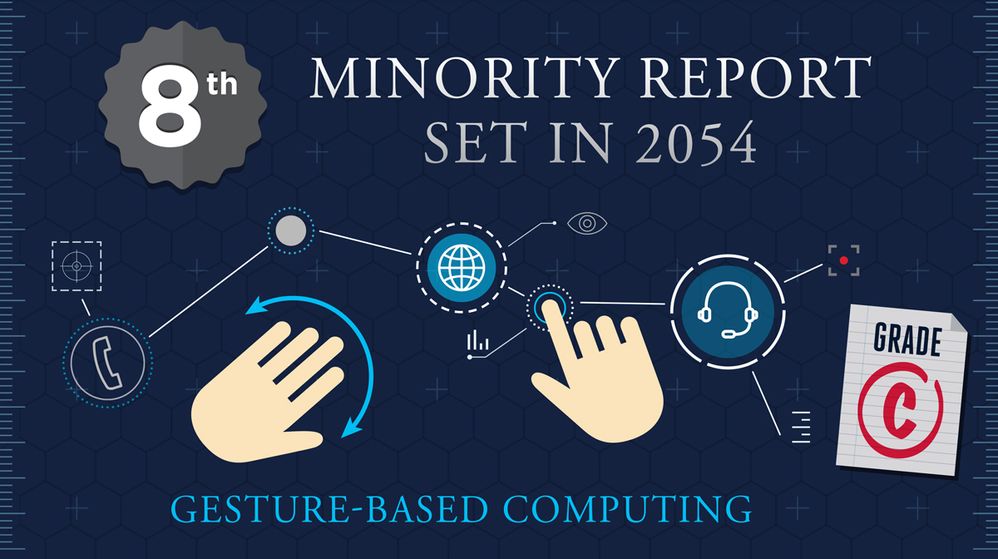 Essentially, this is a move away from two-dimensional computing input (like a keyboard) to three-dimensional input, involving the human body’s movement in relation to a digital resource.

Rick Rosko says that while the tech is already in use in some capacity, it won’t be adopted to the extent depicted in the film:

“A person wearing a glove manipulating objects with full arm motion won't work for most of us. Pretend to be a conductor of an orchestra and keep your hands in the air, moving, for eight hours a day. Not sustainable.”

We return to A.I. with Ex Machina. Set around the present day (no official year is mentioned, but fashion and the environments suggest a present day setting), it centres on a human, Caleb, who is selected to participate in an experiment that tests the latest in humanoid A.I. 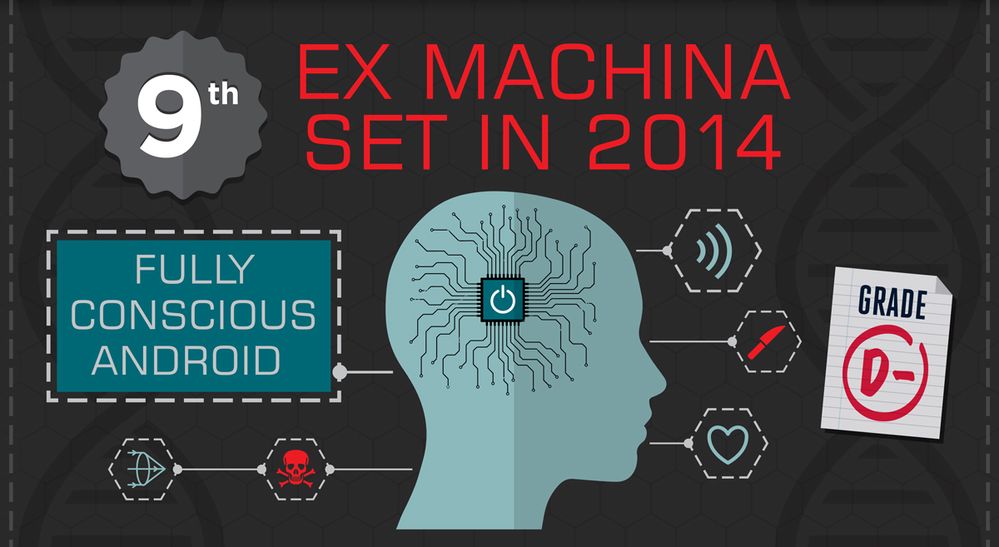 According to Peter Scott, Ava’s (the humanoid in question during the film) capabilities as an A.I. are much less complicated than her physical appearance:

“She is aware that she is not human, so there is no requirement that her A.I. is engineered to reproduce all the quirks of human psychology. This means the A.I. behind Eva is likely to be much closer to fruition than the physiology.”

Blade Runner may take its place among sci-fi film folklore, but our experts are inclined to debunk its tech predictions. For anyone who hasn’t seen the 1982 classic, it involves Harrison Ford (a human) dashing across the planet to terminate four rouge replicants (fully-conscious Androids). 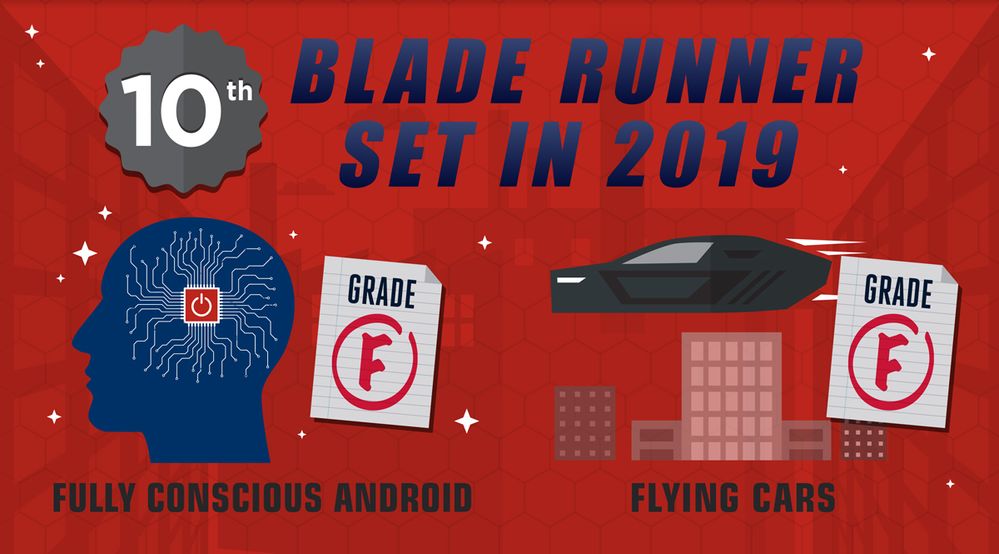 Again, Peter Scott explains this grade is as much to do with physiology than A.I.:

“Blade Runner depicts an android so convincingly human that I can't even tell that it isn't human itself. This requires a level of biophysical engineering that is far beyond anything currently predicted.

“More than any level of artificial intelligence, this feat throws replicants far into the future.”

The success of the sci-fi industry comes from our desire to see what’s around the corner. Titles like Ex Machina and Blade Runner are some of the greatest the genre has ever produced, but a good film does not necessarily require solid predictions.

See which sci-fi predictions beat this batch in the top five in part one.

Got a film prediction we’ve missed that knocks it out of the park? Join the conversation on Twitter @Plusnet.