Do The Public Support Their Local Football Team? Google Searches Suggest Not

Do The Public Support Their Local Football Team? Google Searches Suggest Not

We love Yorkshire, and we’re proud to show it. There’s no purer way of showing you’re proud of where you come from than getting behind your local football team. But not everyone across the country is a diehard supporter of their hometown club.

We took to Google’s Keyword Planner for a deep look at the state of hometown loyalty to local clubs, as well as seeing which were the most popular teams across the country.

Which Teams Are the Most Popular Across the Country?

Using the data, we looked at the top three most searched clubs to see which teams had the highest amount of support. Check below to see who each county supports the most. 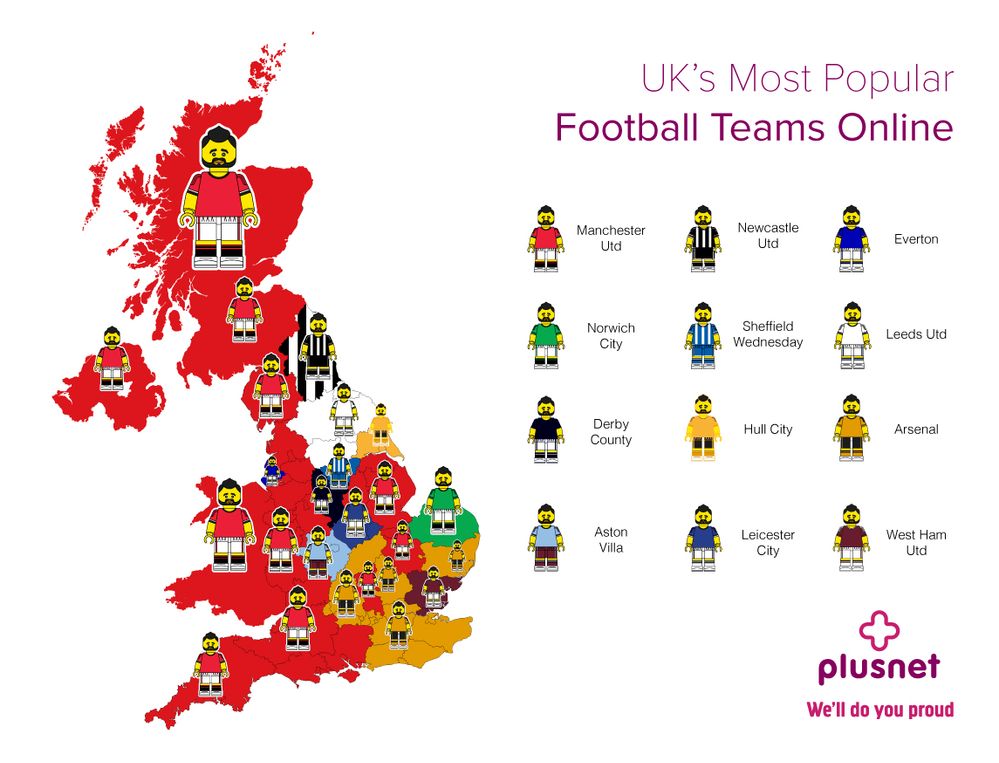 Even with some isolated exceptions, the vast majority of the west of the UK put Manchester United on top. This potentially shows that the common misconception that Manchester United fans hail from the south east may not be entirely accurate. In the east, things are far more diversified, with large areas showing support for Newcastle United, Leeds United, Arsenal, and West Ham.

All other counties supported either Arsenal or Manchester United the most. Manchester United have established themselves as a globally recognised team, with Premier League championship dominance during the 1990s–2000s, and titles in 2011 and 2013. Arsenal, likewise, are an attractive Premier League team thanks to finishing in the top five of the league table every season since 1995–96.

More recent champions, such as Manchester City, Chelsea, and the 2016 champions Leicester City, made much less of an impact. Manchester City peaked at the number two spot in the Greater Manchester area, and the Foxes, whilst understandably being the most popular in their home county, found nearby Rutland much harder to conquer with as many people searching for Arsenal. This means that, even after their improbable Premier League win, Leicester City are still competing to be the most searched for team in their area.

Which Fans Are the Most Loyal to Their Local Team?
Manchester United came out on top (with 45.6%), proving that they have kept their great amount of home-town loyalty while also garnering international support. Swansea City just narrowly came second (45.5%), and Newcastle United finished third with 42.4%.

The research saw clubs from across varied levels of professional football show their support, as Derby County, Rotherham United, and Wigan Athletic from the Championship all made it to the top 10. Carlisle United (of League Two) even managed to crack the top 15 with 28%.

Charlton Athletic, Brentford, and Barnet were at the bottom of our loyalty index, likely suffering due to the fact that Premier League teams Arsenal, Chelsea, and West Ham are in close proximity, as well as the sheer volume of searches for other professional sides across London.

To analyse hometown loyalty for each professional team, we used Keyword Planner* to see how many times football teams were searched for in a particular area of the country. The loyalty rating was then calculated by looking at what percentage of all football team searches from a club's town or city were made for their respective local team(s).

Which Teams Dominate Local Rivalries?
To get an even closer look at the inter-county rivalries, we delved into the key battlegrounds to see who was winning the local rivalries across the country. 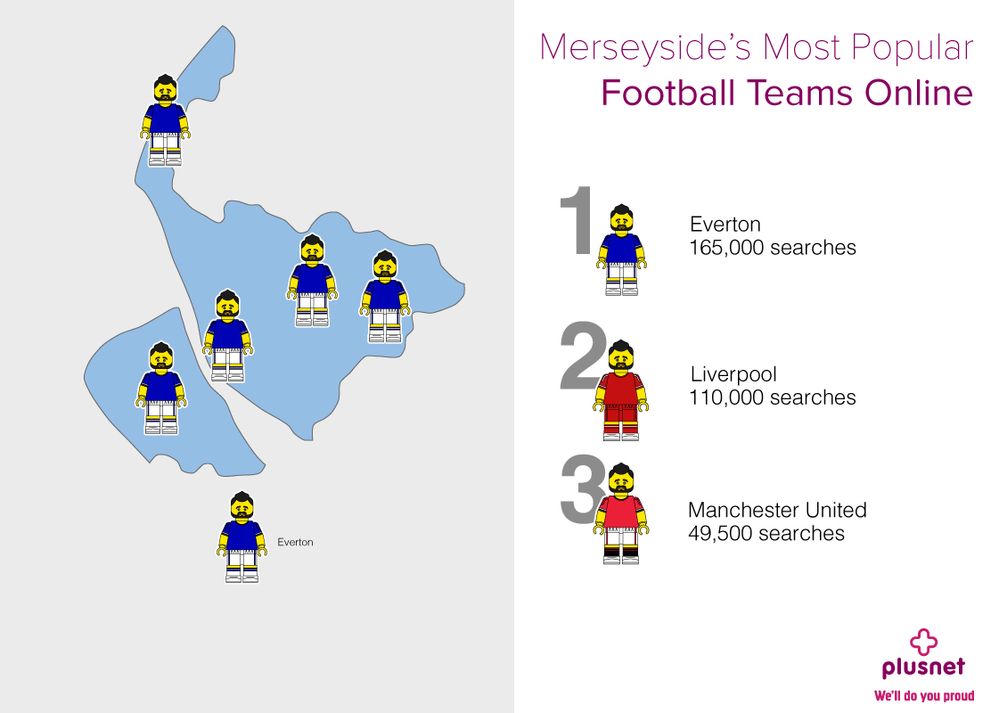 Everton dominated their rivalry with Liverpool, being the most popular team across all of Merseyside – even in Liverpool itself! Overall, Liverpool logged an estimated 110,000 searches across Merseyside, though Everton totalled 165,000. 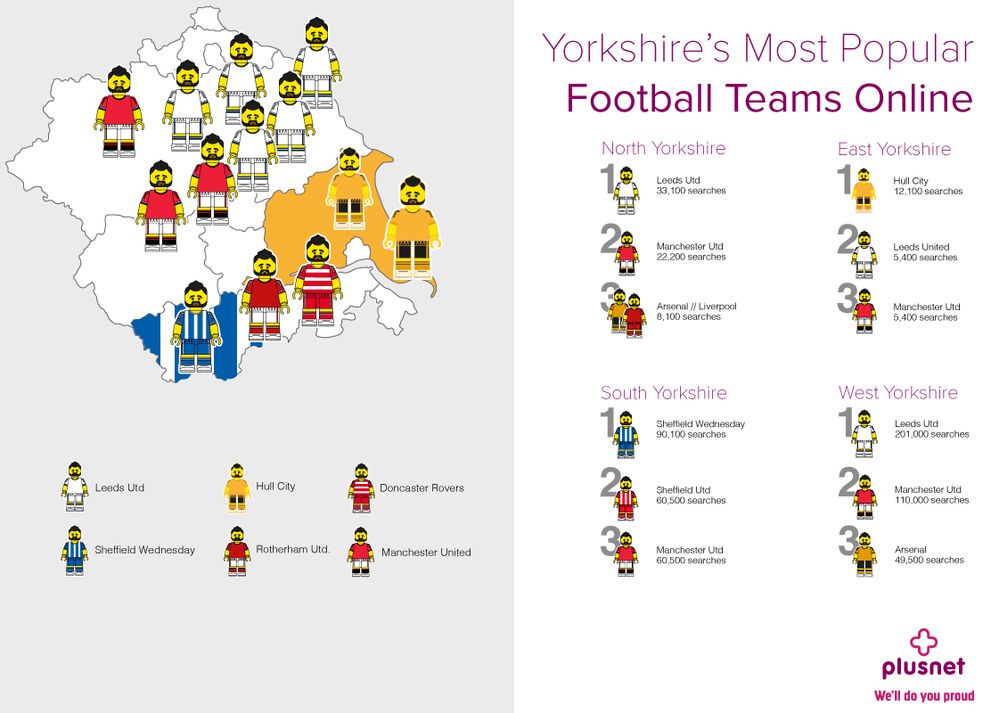 Yorkshire proved to be the most diverse region of the country, with Doncaster, Hull, Leeds, Rotherham, and Sheffield Wednesday topping the searches in local council areas. While Manchester United is still popular some areas of West Yorkshire, we obviously love seeing Yorkshire as one of the top counties for showing local pride! 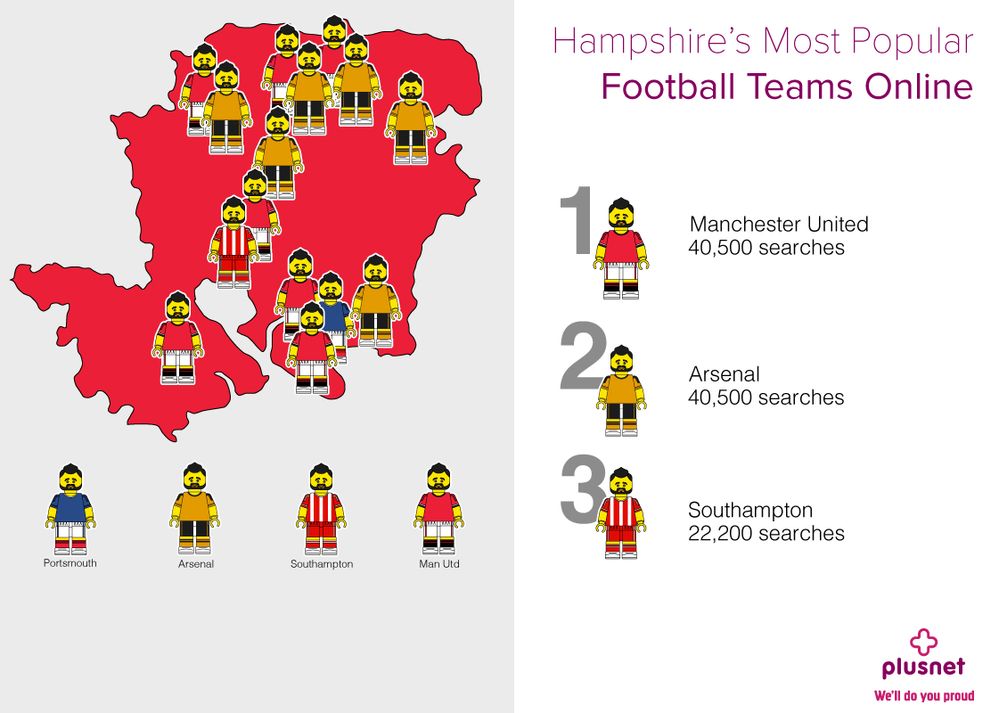 One of the counties that saw the biggest north/south team support divide was Hampshire. You would expect Arsenal to be a popular team in the southern county, but in many areas, Manchester United is either just as popular or even more so. Only Portsmouth and Southampton maintain large support for their local clubs, with surrounding areas instead opting for Arsenal and Manchester United, resulting in them both earning 40,500 searches.

Explore more of our local battlegrounds below: 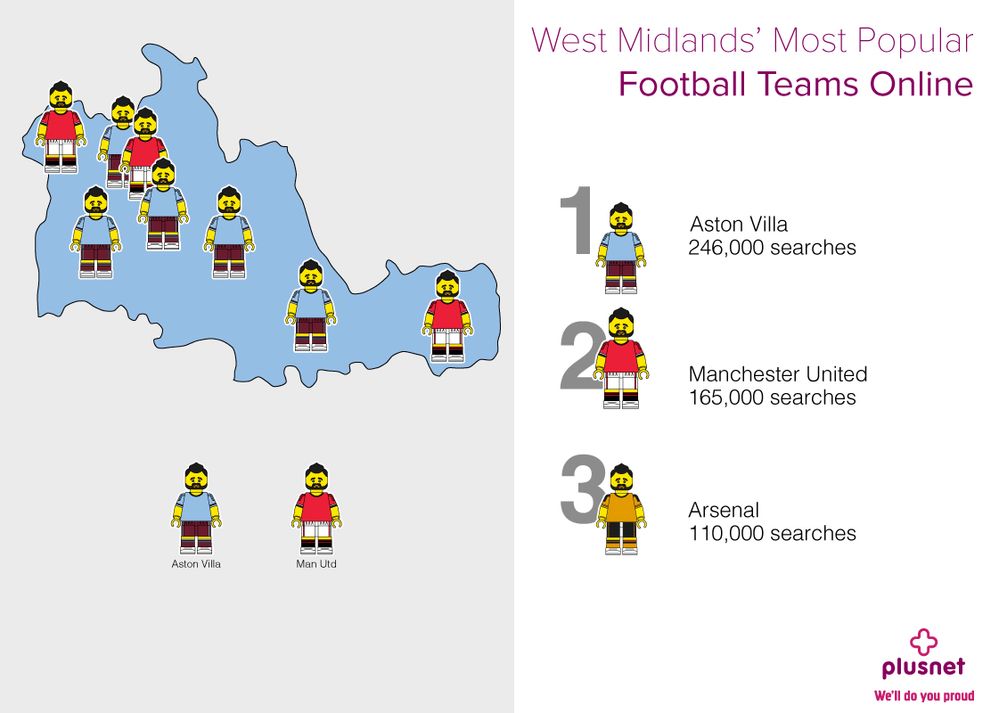 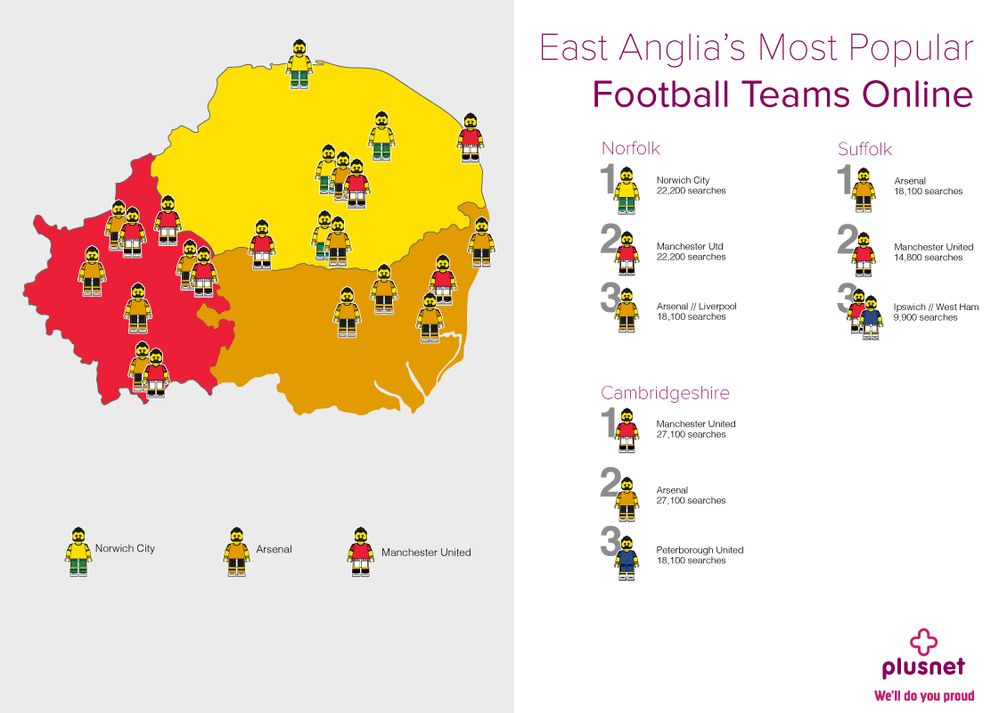 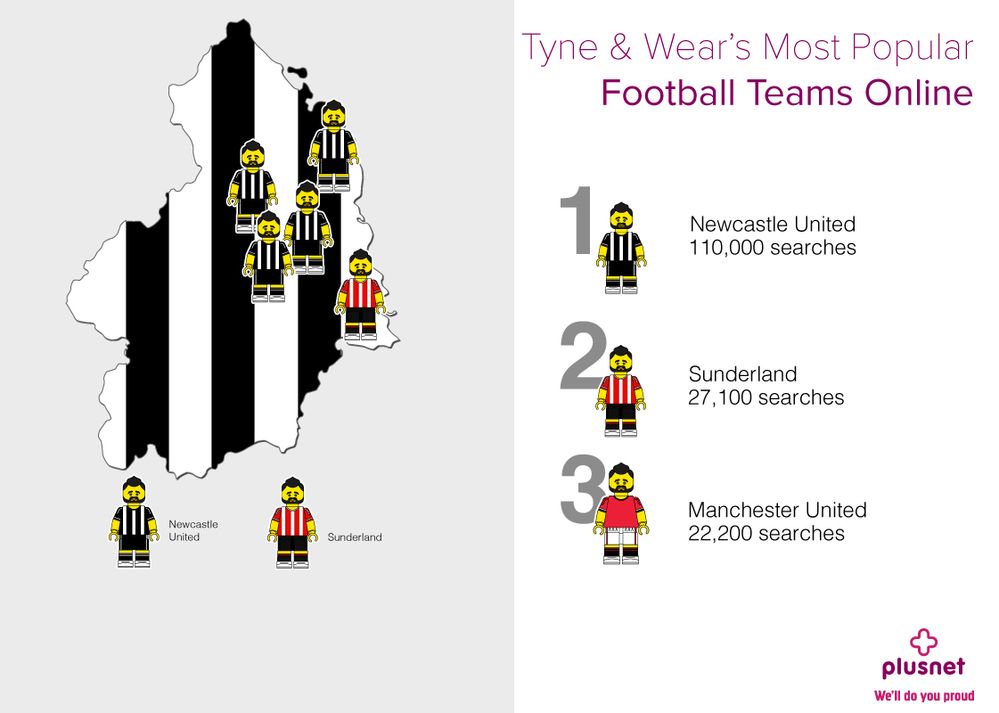 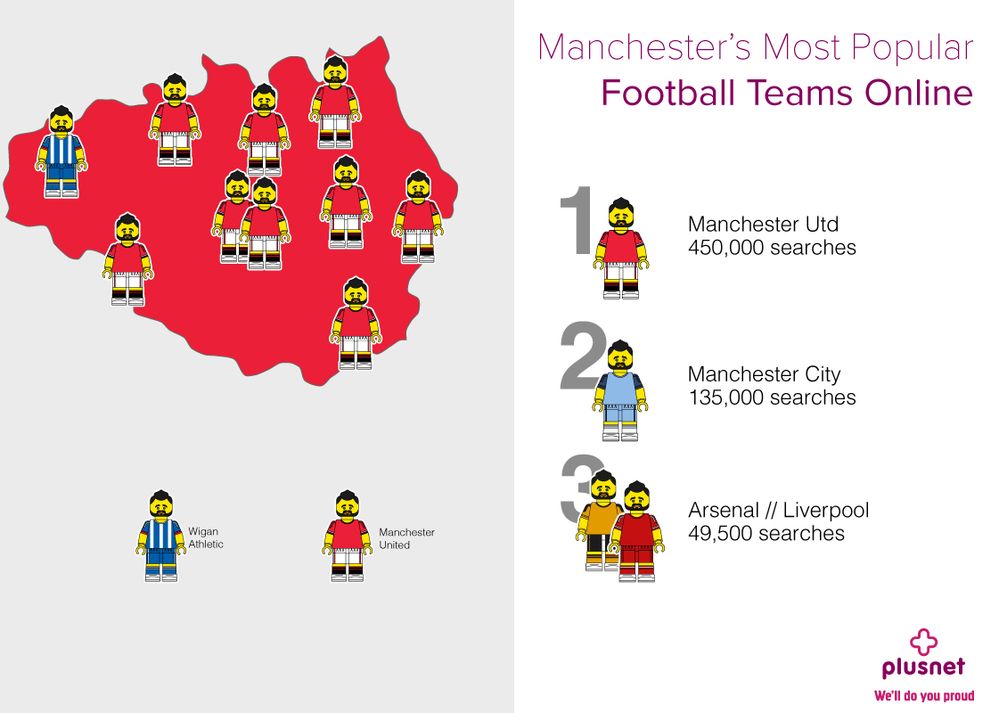 Do you stick with your local team through thick and thin? How do you think they’ll fare in the 2016/17 season? Let us know on Facebook or Twitter!

Follow your team's update anywhere you are with our mobile SIM only contracts.

*All key cities and towns available using Google Adwords Keyword Planner over the last 12 months. To distinguish from location searches, we used the highest volume search term that Google ranked the football number one in the search engine results page. This makes sure we are counting searches for Liverpool (the city) with those searching for Liverpool FC.