The world is changing and changing at a very rapid pace. We are moving towards a world where just about anything and everything is online. There are more ways of getting online than ever before, you are no longer restricted to a desktop PC connected to a phone line with a cable. Hundreds of thousands, probably millions of households and businesses now have wireless routers. Every new laptop sold these days has built in wireless. There are wireless hotspots all over the country and around the world with potentially hundreds of thousands more thanks to services like FON. Mobile phones are increasingly seeing more Internet capabilities with built in WiFi, web browsers and video streaming like the forthcoming (to the UK) iPhone. And we aren't stopping there with the Internet ready devices. There's the obvious things like games consoles like the Wii, alarm clocks with streaming Internet radio rather than FM but have you come across the Internet fridge? 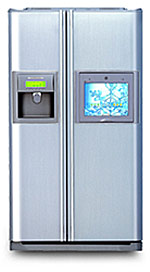 LG also have an Internet enabled microwave, washing machine and air conditioner. With a mobile phone you can turn the air conditioning on before you get home or turn up the heat. Better on the environment than using a timer if you're someone that's always running late. You can go even further with home automation with something like X10 and control the lighting as well as heating, pet feeders (again if you're running late you can make sure the cat is fed from the office or a mobile), or even speak to people at the door over an intercom. Or how about an Internet enabled exercise bike that lets you race against a competitor and insult them using VoIP. Not applicable
[...] posts we’ve made have focussed on changing usage habits and new applications such as the aforementioned [...]
0 Thanks