How to Ruin a Web Design - The Design Curve

How to Ruin a Web Design - The Design Curve
Topic Options

How to Ruin a Web Design - The Design Curve

Now this is kind of tongue in cheek, but there is a certain amount of truth within it. I can’t take full responsibility for this article as it actually appeared a couple of months ago on seomoz.org by a gentleman called Matthew Inman. Some of you may of heard of the phrase "A Camel is a horse designed by a committee", this pretty much expands on this theory. A consistent trend that seems to exist within web design at the moment and can be very true for the majority of the web designers is the following. The more time which is spent on analyzing and examining a design by the incorrect people the worse the design gets. This same trend can also be applied to the number of people involved in the design process Matthew then explains: "Group intelligence is multiplicative when idiots are involved - combining a half-wit with another half-wit does not result in a full-witted person, it results in a quarter-witted person (1/2 x 1/2 = 1/4). Combining a full-witted individual with a half-wit still only yields a half-wit. The more of these "wrong kinds of people" you have involved in the process, the worse things get." This can then be represented by the following graphs: 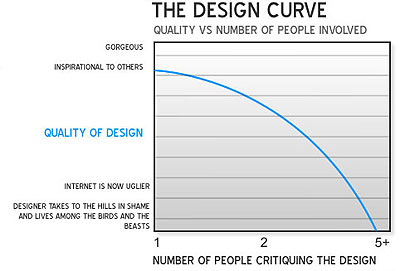 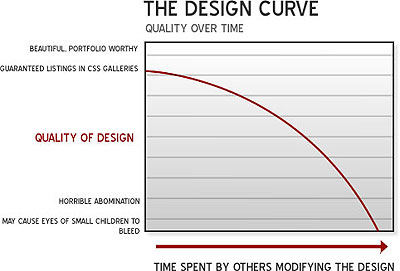 By "the incorrect people," Matthew is referring too: So who are the right kinds of people Matthew is referring too? A good example that comes to mind in relation to PlusNet was the “Don’t Make Me Think!” work stream from back in mid 2006. The specific example is what we did with what is now known as the Help Assistant. Initially the brief was to re-design the interface of what was then called “Contact Us”. There was initially no talk of changing its name or changing tickets to questions. From the concept review workshops with the designers and many other people from around the business the decision was then made to change the names of “Tickets” to “Questions” and “Contact Us” to “Help Assistant”, which was never part of the initial brief. Due to this, the direction and purpose of what is now known “Help Assistant” changed. To this day, this change still causes us, and our customers, confusion and irritation. And this came about by something being over engineered by too many people. To summarize, Matthew then explains that spending more time on something doesn't necessarily make it better; in fact it can make it worse! "From there a new term was born: DESIGNER-ITIS. Designer-itis is my made-up disease that designers suffer from when they've been staring at something for way, way too long. Let a few people mull over your design for a few hours and watch it spread like Ebola". Even though this is very tongue in cheek in some ways it is very true. Too much input into how something works can only complicate something in the end. Personally I think lots of feedback is great but you cannot satisfy everybody’s feedback to meet the final end goal. The original article can be found here: http://www.seomoz.org/blog/how-to-ruin-a-web-design-the-design-curve
0 Thanks
Share
4 Comments
1038 Views
Related articles
Latest Articles
4 Comments