Business owners cite marketing, securing investment and hiring talented people as the big issues that keep them up at night.

85% of small business owners feel like they’re ‘winging it’ at least some of the time, according to our research with Startups.co.uk readers.

The research of nearly 1,000 small business owners from across the UK found one in five “often” felt that way, with close to one in 10 falling into that mindset “very often”. 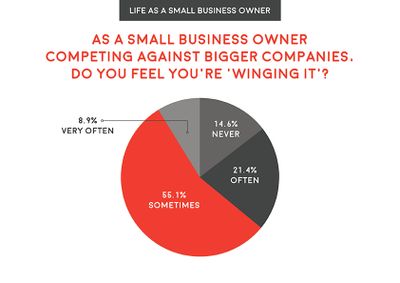 85% of small business owners admit that they feel like they're 'winging it'.

Revealing their innermost fears is not something small business owners can generally afford to share publicly, which is why the findings are particularly fascinating – and were used to devise Plusnet Pioneers, an exciting programme of events, content, and mentoring to help small businesses achieve their ambitions.

Small business owners are often competing against bigger, more established companies, and can feel like their ‘winging it’. The Plusnet Pioneers programme has been designed to help address this fear and, alongside a series of events and mentoring, will offer advice and personal experiences from experts and leading figures from some of the UK’s top brands and most successful start-ups. 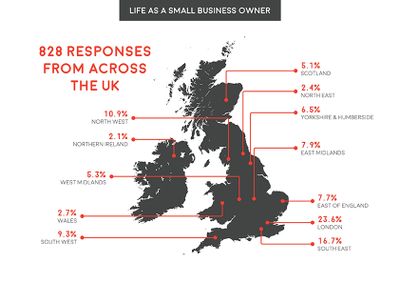 Delving into the research data, it was evident that experience plays a part in the self-assuredness of small business owners, with 39% of founders aged 50 or over saying they “never” felt as if they were winging it when trying to compete against bigger companies.

The highest percentage (49%) of business owners who said they felt they were winging it “very often” started up in the last year, highlighting the need to acquire knowledge in key areas quickly.

Businesses were also asked what key issues kept them up at night, with finding new customers through marketing (71%) the most common concern. This was followed by having enough cash through funding (68%) and the ability of staff to keep customers happy (68%). 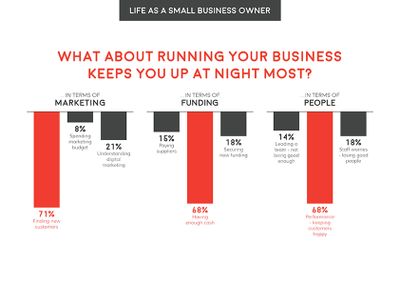 Marketing came out as one of the main worries for SMEs.

With marketing highlighted as a key concern, 41% of respondents said they were “not very confident” when it came to digital marketing, while 71% claimed that it was hard to measure the return on investment from their marketing efforts.

Speaking at a roundtable discussion hosted by ourselves and Startups.co.uk, Daniel van Binsbergen, the founder of legal marketplace Lexoo concurred with the research: “Whenever we try out new channels, what I find really hard is to know when to keep pushing, because it might take six months to understand a channel and get it to work, and when to call it a day.”

Nelson Sivalingam, another roundtable attendee and founder of online learning platform HowNow, pointed to the problem of knowing how to use digital marketing to win new customers. The problem, he said, “is not knowing what you need so early on, so you’re asking the wrong questions and you’re not getting results.”

Funding and cashflow conundrums that are all too common

Funding was also found to give business owners sleepless nights, with 43% admitting that they’d found securing investment “hard or very hard” and 63% saying that they felt ‘new’ sources of finance, such as crowdfunding, peer-to-peer lending, and supplier financing were not accessible.

Asked at the roundtable lunch about the prospect of running out of cash as you look to grow and needing to secure the next pot of money, one entrepreneur was candid enough to admit that it “is probably one of the worst feelings that you can have ever in your life”.

“When you know you can’t do payroll at the end of the month, it’s the worst feeling and you know you’ve got so many people depending on you,” they added.

While the landscape of funding options available to small businesses has undoubtedly changed to provide more choice in the past five years, there’s a sense that getting to grips with the full gamut is a challenge in itself.

Where finding and keeping talent gets tricky

When asked what it is about finding talent that represents the biggest barriers to growth, 50% highlighted attracting people with the right set of skills, with finding local talent (41%) and retaining good employees (21%) also cited as major issues.

For some small business owners, making the leap to take on a first employee is daunting enough. Gem Misa, co-founder of health food company CauliRice, said: “We still haven’t got over the hurdle of hiring. We’re very nervous. The weight of responsibility of a permanent salary is really daunting for me.”

HowNow’s Sivalingam has adopted a more cautious approach to hiring after throwing himself in at the deep end. “I think hiring and managing people is easily the hardest thing [in business] and I think, in hindsight, I would keep the team as small as possible for as long as I can. The more people you get, the more you find yourself in a sort of managerial role.”

Pippa Murray, founder of nutritious nut butter brand Pip & Nut echoed the sentiments shared by survey respondents, that it can be hard to hire the people with the skillsets you need.

“I’ve found that the challenge is that in the first couple of years you hire relatively junior people as that’s all you can afford. So we’ve got some relatively inexperienced people to manage a large retail account; when do you train them or when do you bring someone in to work above them?

“A lot of the time I don’t have the answers so I think as a founder there’s quite a lot of pressure for making sure that [your team] are growing.”

Reassuringly, it seems the EU referendum has not spooked business owners as much as some might have feared. The vast majority (73%) feel that hiring talented people will not be harder post-Brexit.

And despite taking on the responsibility for other people’s livelihoods when they started to grow their businesses, close to two-thirds (63%) were unconcerned about becoming a leader.

In light of the research findings, we teamed up with Startups.co.uk and a panel of business experts to launch Plusnet Pioneers. 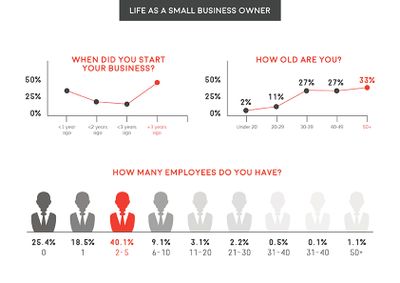 The campaign will focus on key challenges facing small businesses and will provide free services to help conquer these challenges including workshops and video tutorials on issues like finance and talent, as well as mentoring and access to face-to-face consultancy sessions.

Plusnet is on a mission to help small businesses and budding entrepreneurs grow and has teamed up with Startups.co.uk to create Plusnet Pioneers, an exciting programme of content, events and mentoring Article written by and first published on Startups.co.uk.