re- Upgrading your upgrades

re- Upgrading your upgrades

Now that normal forum programming has resumed, can I point something out to PN please...?

I read this earlier before the forums had a wobble when it was only 10 mins old. I've had plenty of time to read it

It's 9 hours old and the wording hasn't changed and neither has the tab I'm now supposed to see!!

So when I checked (upon first reading it), something became apparent

Now, on our updated, all singing, all dancing Member Centre, we’ve made it easier than ever for you to upgrade your package to the best one available in your area.

A redesigned, refreshed ‘product change’ journey will not only show you which products you can upgrade, but also let you choose whether you want to upgrade broadband, calls or both.

A new name: It’s now called ‘Offers and Upgrades’ instead of ‘Product Change’.

I must be missing something, as when I checked, then and now, mine is still Product Change!!

So, was the blog released too early, or is this change being held up by recent billing/account issues, not that I've noticed any issues with my billing or account as yet. If it's not released yet, then maybe it should say coming soon - not trying to cause aggro, just saying why is it saying something when I can't yet see/get it.

How is the best one in your area determined? Do ISP's use my neighbours speed results to give me an idea of what I could get? Is it purely from the BT DSL checker results or from the now removed data transfer rates?

(again, do not take any offence)

It goes on to say:

But it’s not just the new stuff you should be excited for. We’re also making all the old bits even better, letting you upgrade from copper to fibre or fibre extra broadband, or change your call plan in a much simpler way.

Why do ISP's say from copper and to fibre? I know, in my case, it's fibre to the cabinet and then copper (or again in my case some aluminium), but they make it sound like I'll get FTTP. I say ISP's, as afaik they all do it!! I do believe some customers out there will be none the wiser and assume it's fibre all the way.

Here's where I feel a little miffed, because, I'm on this:

And I know, due to reasons beyond my control, that my download and upload will be around 24Mb (probably max) and 2.7Mb (almost certainly max) respectively.

But if I wanted to, I could upgrade (but not actually gain from it). 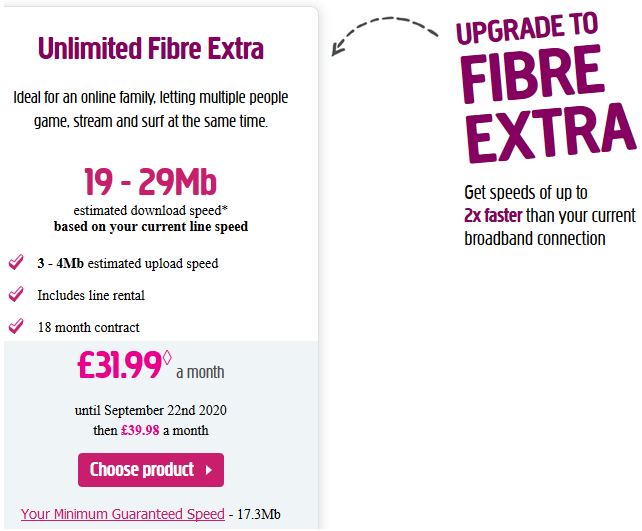 If this was tailored to my connection, why does it say I could get from 19 and up to 29, when afaik this upper target isn't achievable. PN know what my line can do and it certainly isn't near 29Mbps!! It looks nice and big does that 19-29, though below is a teeny weeny 17.3Mb.

(just pointing it out from what's written within the account itself, not a billboard for example)

Likewise, they know my upload has actually been below 3Mbps, where has the 3-4Mb come from?

The * on the above image does go on to say

The actual speed you'll get should fall within the range of speeds we believe your line will support.

Finally, the BT DSL checker states my handback threshold is 19.1Mbps on the download, yet the figure given to me is now only 17.3Mb

is the latter been taken from recent system checks?

(as an aside, if I were to do this upgrade online, would the system actually allow me to do this even though 'it' knows my connection can't run within these speeds. I'm sure it would be happy to take an increase in money!!)

No ill intent meant by this, just find it a tad annoying.

I really do feel for those whom can't even get FTTC, I really do!

(venting of steam over, guess I'm still cheesed off with our connection issues

and it's probably in the wrong forum section too)

Out of curiosity I went and had a look, clicked on "Product Change" to see what was available, and got this - 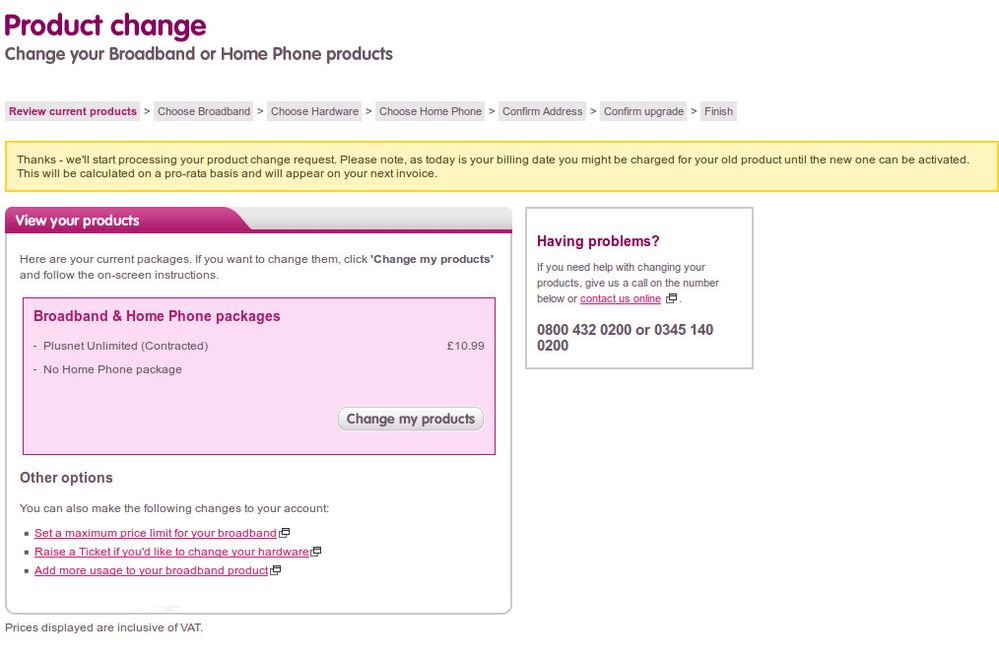 The wording in the yellow box implies that I had just accepted an upgrade and that the product change order had just been initiated,  when all I had done is simply visit the page and hadn't clicked on anything !.

Technically I had previously accepted an upgrade from ADSL to FTTC about five weeks ago, but the order failed due to Openreach discovering that my line doesn't go through the fibre cabinet as previously indicated on the BT database.  Therefore my upgrade order is scheduled to be cancelled, and if in the coming weeks fibre becomes available after possible cabling works, then a new upgrade order will have to be placed.

So the yellow status box isn't reflecting the current state of affairs, and is misleading by implying that a new order request had just been started simply by visiting the "Product Change"page. 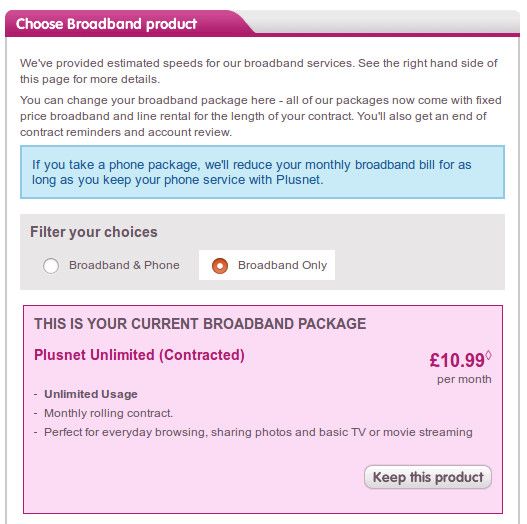 That shows what package I'm currently on (and no upgrade options),

so you read the blue box which says "If you take a phone package, we'll reduce your monthly broadband bill"

and think if I click the "Broadband & Phone" radio button, that will offer a lower monthly price - WRONG ! 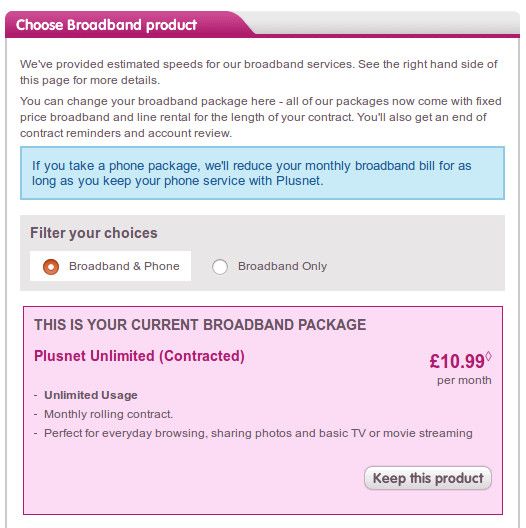 Immediately below the pink "Choose Broadband product" tab (that offers no choices), it says -

"We've provided estimated speeds for our broadband services. See the right hand side of this page for more details."

Below is a screenshot of the entire screen, so can anyone spot the "estimated speed" anywhere ? 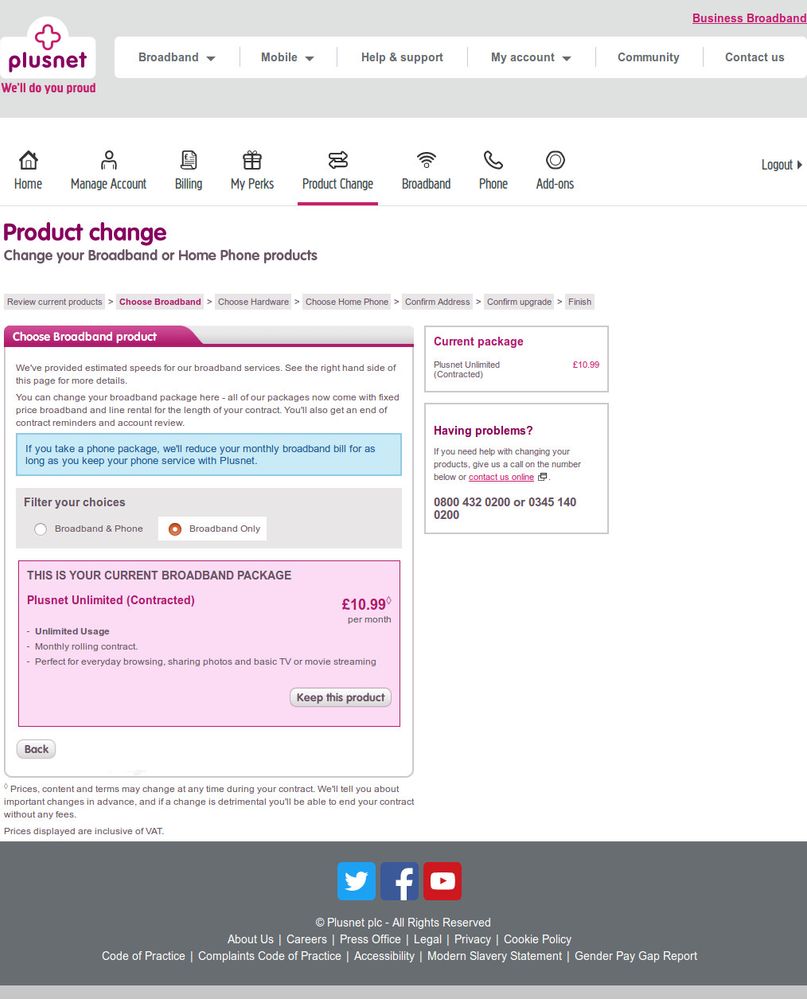 Guess you're still on the slow old billing system as your connection wouldn't cope with the 'singing and dancing' new billing system!!

As I said, I really do feel for ya!

I am on Fibre Broadband and it has my out-of-contract price at £11 per month, ie 1p more than my current contract price.

That would be nice if its true but I cannot really believe it.

I had previously accepted an upgrade from ADSL to FTTC about five weeks ago, but the order failed due to Openreach discovering that my line doesn't go through the fibre cabinet

If you're being offered FTTC for £11pm, it sounds like a bargain!! If that's the price you're seeing, I'd keep a copy for future use/haggling

Mobile safari, link to change product simply goes straight back to main portal page for me. Well, not directly, some other product page first with no info about anything and a button to “show all products” which ends up on the portal page. Terribly broken I would think, ahem.
That's RPM to you!!
Message 8 of 12
(1,564 Views)
Reply
0 Thanks


Guess you're still on the slow old billing system as your connection wouldn't cope with the 'singing and dancing' new billing system!!

This is nothing to do with the billing engine, firstly all customers are on the new billing engine, secondly we are aware that there are some bugs with the release but in general its a much better experience for customers.

But the formatting of the page posted by others looks different to mine, as if it's in the older style...?

Guessing it might be as I'm on Fibre, whilst some others are on 'normal' broadband, IDK?

Just checked and I'm still not seeing the

‘Offers and Upgrades’ instead of ‘Product Change’

It's all the same as I posted at the top.

Nothing to be sorry for

Guessing it might be as I'm on Fibre, whilst some others are on 'normal' broadband, IDK?

Nope, just a bug with the release that we are working on

Sounds like you need to employ a ruddy good bug exterminator then!!

Oh, or you could try https://www.sheffield.gov.uk/home/public-health/pest-control.html