I have been with Plusnet since 2008 for Broadband. In January 2021 after struggling with sub-normal Plusnet Broadband speeds I rang Plusnet about an upgrade to Fibre. I asked specifically if Fibre was available to my property. The Agent apparently ran all the checks and said that it was but only Fibre at the moment and I would need to bring my line rental over to Plusnet & I would get a new router through the post. I did this, having been with BT for over 20 years for line rental. The phone moved with no problem but I got no updates on the Fibre upgrade.  I rang Plusnet today only to be told that Fibre was NOT AVAILABLE to my property and the Plusnet Agent had made a "mistake". No order had been put in for Fibre but no one had told me.

I only wanted an upgrade to my Broadband speed & now find that I have moved my phone line under false mis-selling of a Fibre product I can't have. I spent two hours on the phone and the Agent I spoke to was sympathetic & re-organised my contract to match that I am not upgrading my Broadband & gave me a £10 discount. All was in the best that could be done in the circumstances kind of approach!

I was also told that if I try and cancel the "new contract" for my existing Broadband, which is only my old contract reactivated. I would be charged a fee!

Personally I find this whole thing a mess and upsetting. I am a really loyal customer and only want better Broadband.  I have neighbours on BT getting Fibre but apparently it is unavailable to me under Plusnet. Apparently Openreach rejected the order. I asked the Agent to log a complaint and that I would post this on the Forum to raise awareness.

Might not be much help, and I totally understand your frustration, but if you post a screenshot of the result of running this link: https://www.broadbandchecker.btwholesale.com/#/ADSL - making sure to obscure/remove your phone number, it would be useful.

It might be that the cab is full which could be why your neighbours have it and not you, just a thought

Hey @Chelsea08, thanks for getting in touch with us here.

I'm sincerely sorry to read about your recent recontracting experience and I apologise for the frustration caused to you. I've tried to get in touch with you over the phone just now, however, there was no answer so I have created a complaint support ticket for you here. I'll try and contact you again on Monday. Feel free to respond to that ticket if there's a suitable time/date/number to reach you on or if you have any further comments.

There are two possibilities here...

The BT fibre availability database has incorrect data - some areas (streets) receive BOTH FTTC and FTTP but not all properties on the street can access both.  For example I know of a not particularly long street in urban Warrington where one part has FTTP, the other does not, but the BT database suggests that all properties at the post code get both.  Plusnet do not offer FTTP, thus if the database said both FTTP and FTTC it is understandable how a "mistake" might have been made.

The BT cabinet is full - at the time that a service is ordered, it might well be the case that there are spare FTTC ports available in the cabinet, however the BTOR systems do not reserve posts on order placement.  If an in-use port goes non-serviceable, a spare port will be brought into service to fix another user's problem.  In some circumstances that might leave no free ports until such time as the equipment can be replaced or supplemented.

The link which @jab1 referred to will advise if FTTC or FTTP is the fibre service available at your property.  If there is temporary non-availability, it should also indicate when new capacity is anticipated.

One other possibility , The Agent did not know what he was doing 😡 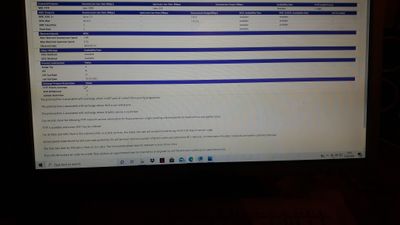 Thank you for all of the replies I have received. I am very grateful for all of the support and excellent advice I have received from members of the Forum. Since I posted the comments Plusnet has been in touch but I have not yet spoken to them again but will do on Monday.. I have posted a screen shot of the Broadband checker for my home phone number that a member of the Forum recommended I run and it is below. I don't really understand what it means? Thank you.

@Chelsea08 Looking at your photograph - which would be much easier to see if you had actually posted a screenshot - it appears that you can only get either (a) a low-quality, low speed over the ADSL network or (b) a fast (but very expensive) FTTP, I am not going to comment further, but I'm sure @Townman will pick this up fairly soon and be able to explain the options, or his take on the information.

Just out of curiosity, roughly where do you live - out in the country, or in an urban area (the first part of your postcode might help here).

Not a screenshot as such, more a photo of your screen, so slightly harder to read.

But I can see that it says you have FTTP available to you (also "OH feed with no anticipated issues" is stated) and not FTTC, so therefore PlusNet under their present policy of 'not being able to supply FTTP' (other than to some of us on their 'now-closed-to-new-entrants-trial') will not be able to provide you with any type of fibre-based connection.

ISTM that PN ought to perform some sort of about face and put things right for you as you have indeed been misled.  One likely outcome might be to release you from your contract without penalty which would allow you to obtain a FTTP connection from another supplier.

You could well be right there, @RobPN , but I wonder if the OPs reply to my post above might shed a little more light?

@jab1  why do you say expensive? FTTC and FTTP tend to be similar in price for the same speed band.

@Mustrum Because the 'available product' looks to be a little different to what my availability check shows - but maybe I'm misreading, in which case I apologise. I have no chance of FTTP for the foreseeable future , so don't have any way of checking the pricing.

@jab1  I believe it shows  WBC FTTP, not FTTP on Demand, which is the expensive one.

It certainly seems a clear case of being miss sold, I certainly hope PN does the right thing and allows a release of contract, and adds in some competition - at the very least cover any migration costs. EE now does FTTP, so at least an opportunity to keep things in the same family without the extra costs BT would charge.