What is Black Friday?

What is Black Friday?
Topic Options

What is Black Friday?

The annual date that officially kicks off the Christmas shopping season, Black Friday is a day of online and in-store offers that encourage consumers to make big purchases in the build-up to the festive season. But what is Black Friday, how has it made such as impact here in the UK, and how can you make sure you get yourself a good deal?

Originally an American tradition, Black Friday occurs the day after Thanksgiving but has now caught on across the world. With its proximity to Christmas, Black Friday was always a busy day for American shoppers, though it has officially been the US’s busiest shopping day of the year every year since 2005.

While ‘black’ preceding a day is usually referring to a negative event, such as a stock market crash (Black Monday), the ‘black’ in Black Friday refers to a day where retailers are ‘in the black’ – in profit.

Sales on the day itself were originally focused on electronics – laptops, TVs, games consoles, cameras, smartphones – but has now spread to all industries, with offers and promotions across the majority of retail and service websites.

When is Black Friday? 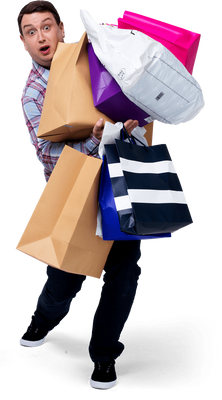 Try not to buy everything...Black Friday is traditionally held the Friday following Thanksgiving which is on the 23rd November, so this year it’s on 24th November.

How to get the best deals

1. Prepare for the day

If you’re looking for bargains this Black Friday, start looking for upcoming offers in the build-up, as many of the best deals start early sell out quickly. You may need to be one of the first in the (digital or physical) queue to get them, so set any notifications you may need to ensure you’re ready to grab an offer you have your eye on.

Don’t be taken in by every deal you see – consumer watchdog Which? found that 49% of the deals on offer in 2015 were actually cheaper at other points of the year – so make a note of the average price for items you’re looking for before going for an offer.

3. Don’t wait until the day

Many retailers will now offer deals in the week running up to Black Friday (some even sooner), so you aren’t limited to making the most of the promotions for one day only. Amazon, for example, has expanded its sales so much that they run ‘Black Friday’ deals an entire week before the day itself. Browse your favourite websites and shops in the days preceding and following Black Friday to ensure you don’t miss out on getting a good deal.

What is Cyber Monday?

Cyber Monday is all about deals onlineCyber Monday is similar to Black Friday, but is exclusively online, with a full 24 hours of sales and limited-time promotions available without leaving the house.

It is predicted to be the biggest online shopping day of the year, and unlike Black Friday digital retailers invented Cyber Monday to take advantage of the annual rise in sales they saw the Monday following Black Friday. Google and social media heavily influence shopping on Cyber Monday, as thousands of brands try to push their promotional offers out to as many people as possible. Cyber Monday is also a great period for free shipping, with many retailers offering free postage for the day – so look out for that.

When is Cyber Monday?

Cyber Monday follows the weekend after Black Friday, so this year falls on Monday 27th November.

Head over to plus.net and see what deals we have on over the Black Friday and Cyber Monday period. Happy deal seeking.