The happiest funeral ever - IE6 is dead; the death of a browser

The happiest funeral ever - IE6 is dead; the death of a browser
Topic Options

The happiest funeral ever - IE6 is dead; the death of a browser 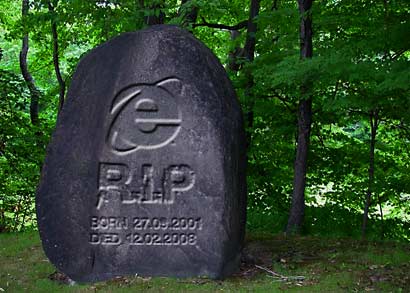 The 12th of February 2008 will be the happiest day of my web developer life. On this day (and it will be Tuesday, although it should be Monday - they are always bad) Internet Explorer 6 (IE6), which I also call "Internet Exploder" will finally die. People say you should never be happy with someone else's death and while I fully agree, I can't hold back from yelling "wawaweewa" in true Borat style. Why is that, you ask? Simply - Microsoft will force all Windows Update instances (so almost all XP machines) to automatically download Internet Explorer 7, IE6's older younger brother (some say almost equally bad, but we'll talk about that in a minute) and to overwrite the old installation of "Layout Crasher" with its successor. Of course that won't happen over a minute and I know that it will probably be Christmas before Santa will bring me nice and fresh WebTrends statistics on IE6 disappearance to read - but come on, what news!

Maybe I should explain, why Internet Explorer 6 is such a pain to us web designers working here at PlusNet - and our colleagues around the globe. Answer is very trivial - no matter what you build, it does not display right in IE6. It may work "just right" or "almost like it", but in the terms of web site layout rendering this browser is worse than my old Sharp microwave (if I could only install Opera or Firefox on it, it would anyway). You want precise positioning in your layout? Feel free to try, but you're going to finish with a nasty CSS hack anyway. His Hackness prevails. In theory, it should not be a big problem but in fact most of the things we do we could present in the form of nice equation: Web design (xhtml + css) development time = 10% of actual work + 90% of debugging Internet Explorer 6 Is Internet Explorer 7 better then? Only a little, but at least it is "kind-of-working" all the time (not only when it is in the mood) and the tweaks we need to perform on fragile CSS are (mostly) trivial. It's far from ideal of course, but you can't make a web designer happy - that's an old truth. Still we are so looking forward to Exploder 6's bye-bye-farewell trip to the Dark Side of the web. Microsoft - you have my deepest congratulations on the decision. Better later than never. Hey, who is going for a Company Night Out? I know it will be a middle of the week - but finally there's something to celebrate! - the death of a browser. Ah, one more thing... As an old, grumpy web designer I cannot resist: Use Web Standards compatible browser. It will pay off well, especially now when Web is evolving so fast. Obsolete mechanisms must go. Here I said. Rrrrrrevolution coming!