After weeks and weeks of hard training and tactical planning the PlusNet team headed off to Wembley for the annual ISPA 5-a-side championships yesterday.. Ok, we didn't train or have any tactics but that made it all the more exciting! We prepared for the long trip south by stocking up on energy drinks and cereal bars and pretented we were real athletes. This illusion was shattered by the time we reached Watford Gap Services and stopped off for a team Wimpys

- Not recommended by the way. By the time we reached the venue, in the shadows of the famous Wembley arch and put on our kit we actually looked like a real team: 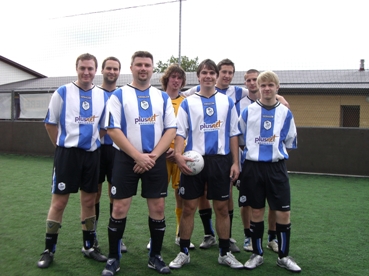 From left to right: Simon Leary, Matt Hibberd, Simon Bedford, Ben Kirkham, Nick Dodds, Chris Cotterill, James Kirkham and Matt Roebuck. 14 teams entered the tournament this year with representatives from Pipex, Zen, Claranet and ISPA themselves. We were drawn in a tough group with last years winners Claranet, ISPA, Rconnection and Opal Business Solutions. 4 wins and 17 goals later we were in the quarter finals. The quarter finals proved a tighter affair with Oasis taking us all the way to penalties after a 2-2 draw. We scraped through after a poor performance but returned to form in the semi-final with a resounding 4-0 win over Exponential-e. The final was a tight affair, with last years champions ClaraNet fighting hard to keep their hands on the trophy. I wasn't to be though as a solitary Simon Leary strike was enough to give Team PlusNet the win they deserved! 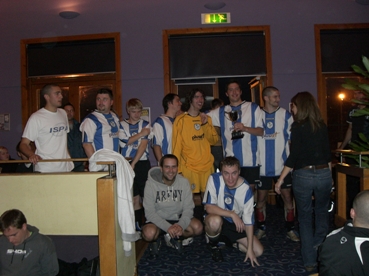 All in all a succesful day - 7 wins out of 7 with a +20 goal difference. Well worth the long drive and dodgy burgers :) The event raised over £4000 for 4 different charities including the British Liver Trust and Lohada and should be bigger and better next year. We will of course have to return to defend our trophy! For more snaps of yesterdays action take a look at this thread.