Monday saw the end of our Christmas My Referrals promotion and, after a few phone calls and emails, I managed to contact our lucky winner. So, I'll be off to New York to enjoy my prize over New Year! *Chris wakes up* The lucky winner of the £2000 trip to the Big Apple is 31 year old David Male from Leamington Spa! He's been a PlusNet customer since 2005 and won the competition after recommending PlusNet to an old friend who was having some problems with his service provider. 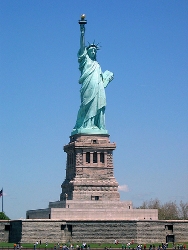 David will be taking his fiancee to New York early next year and is going to try incorporating the trip into their honeymoon! Congratulations to David, and thanks to everybody who took the time to recommend PlusNet to their friends and family. Don't forget that you can still get up to £30 for each and every person you refer to PlusNet as well as a monthly discount of your subscription. I'm sure this won't be the last promotion we run so keep your eyes peeled in 2008.