‘Born’ in a car park, Richard Hilton’s fitness franchise Gymbox was happy to be the industry’s version of Marmite when it launched in London’s West End back in 2003.

A former ad executive, Hilton rose through the ranks at global agency McCann Erikson. A stint with Wieden+Kennedy, which prides itself on building “strong and provocative relationships” between customers and brands, followed.

So it’s little surprise his vision was an unapologetically different, “no-holds-barred” spin on traditional gyms, with its first location in what was once a basement car park in Holborn. When Gymbox launched it did so with what it describes as “stake-in-the-ground” classes such as Karaoke Spin, Rave Dancing and an 'anything goes' attitude. Inevitably the industry took note.

His desire to be different stemmed from witnessing the ‘soulless’ gyms the US had to offer and a determination to offer the perfect antidote, a back-to-basics passion that has influenced an industry transformation over the past decade.

“When we came in in 2003, there were lots of gyms with decent products, but nobody had created a sense of brand,” he recalls. “We weren’t just creating another gym; we wanted a meaningful brand within the gym market. We disrupted the industry; so we can’t fit inside the industry.”

Punching its way out of trouble 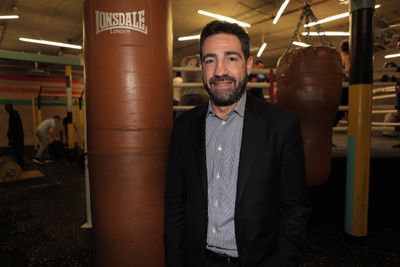 Indeed, while the economic downturn left other businesses on the ropes, Gymbox’s unique and distinctive marketing strategy saw it punch its way out of trouble, leading to its estimated value of £60m in 2016.

That’s why Hilton’s marketing and branding track record make the entrepreneur perfectly placed to offer advice to those seeking to make a big impact with their small businesses. And it’s for these talents that Hilton has been chosen to join an elite panel of business experts and entrepreneurs as a Plusnet Pioneer.

Teaming up with Plusnet and Startups.co.uk, Hilton will be part of an exciting programme of events, mentoring and content designed to help small businesses grow, which he admits to being “thrilled” about.

“These initiatives are really important,” he says, “and I can’t wait to offer my expertise and advice to people who are passionate about making their business a success.

“Given my history with Gymbox, and the fact I worked in advertising previously, I’m excited about explaining what I’ve learnt, and showcasing how essential these elements are when running a company.”

As part of his role, Hilton will be sharing his wealth of knowledge at a free marketing masterclass in London. Alongside him will be an awesome line-up of business leaders, with fellow Plusnet Pioneers Vita Coco’s UK CEO Giles Brook, founder of Girl Meets Dress; Anna Bance, and ad agency Karmarama’s chief executive; Ben Bilboul all on the panel.

Having recently sold a large stake of the business and with time on his hands – Hilton tells us that he now only works on Gymbox one day a week – the fitness entrepreneur spoke exclusively to Plusnet and Startups.co.uk to offer eight indispensable marketing rules he lives by…

1. Be passionate, and think ‘product’

Having run Gymbox for over 14 years, Hilton knows that all the bells and whistles of an elaborate marketing campaign will do nothing for your brand if it’s not backed up by two important things: passion and product.

“From an entrepreneur standpoint, I think any business needs to deliver passion – whether that is passion in the way you communicate or passion in terms of the product.

“I think lots of brands lose their enthusiasm but every single start-up has passion and every single entrepreneur has passion. You have to make sure that passion comes through in marketing.”

2. Identify your USP and deliver it

When it comes to essential advice for entrepreneurs, Hilton asserts that start-ups should work out what makes them different from others in their space – and make this the focal point for marketing.

“I think the key thing for any brand is to identify the key differentiator for your product – and to deliver that key difference. We use humour because ultimately what we believe in, and what we sell, is people.”

3. Be controversial, within reason

While all entrepreneurs market their business with the best of intentions, sometimes things go wrong, as Hilton found out in 2009.

One of Gymbox’s campaigns had received some negative press and even attracted the scrutiny of the Advertising Standards Authority – though the campaign was eventually authorised.

“Ironically, it was a leafleting campaign we ran and it wasn’t one of our major focuses of the business,” he says. “What it ended up telling me is that it’s not always a bad thing to be in a bit of trouble because ultimately it was proved that we had done nothing wrong and the PR it generated far exceeded any of the paid PR we’d had in the previous two years.

“We’d always been a little bit controversial and that experience certainly didn’t make us think we should be anything but. If anything it worked in our favour. It wasn’t a deliberate strategy, that’s just the way it ended up happening.

“It’s the old adage that even bad PR is good PR.”

Opening its doors in 2003, Gymbox pre-dates virtually all the social media channels that the world’s biggest brands and hottest start-ups now use to push products and communicate with customers.

Hilton says that, while Gymbox existed “before any SEO”, the evolution of the brand hasn’t changed because its values haven’t either – and asserts that this is the business’ main strength. “The brand DNA and brand personality hasn’t altered and I think that the strength of a good brand is that consistency of advertisement and communication.

“If you look at all the good brands, what they say as a brand is very consistent but how they say it evolves. With Gymbox, what we’re actually saying is identical to what we said 14 years ago, but because of how advertising has changed, the mediums which we use have changed.

It’s all a far cry from the “few outdoor billboards” that once sufficed for advertising and a website that served mainly as a holding page. “We still do outdoor advertising, but we also now have Facebook campaigns and Instagram messaging. Rather than just having one or two forums to talk in, we’re saying it across 15 different mediums.”

5. Be bold and back your brand

Another thing that hasn’t changed, is Hilton’s view that even in straitened economic times, you’ve got to keep the faith with your marketing.

Having successfully navigated Gymbox through the major recession of the mid to late 2000s, the company held its nerve. “Every single gym business was suffering, including ourselves,” he remembers. “The temptation was to cut advertising and start talking about price – that was what everyone did. They started doing price offers; started cutting their advertising spend.

“We actually took the opposite approach so we doubled our advertising budget in the recession years and took a branded approach.

“The belief was that while people were becoming more price conscious, if we could deliver something different to them, and then the price objections would be overcome.”

6. Set budgets for marketing you can measure – and some you can’t

Backing your brand doesn’t mean you shouldn’t know where your money’s going and be able to measure a good chunk of it.

Hilton’s view though is that you need to accept that some of your marketing spend will be on long-term brand building making it hard to evaluate the return on that investment.

“Sometimes we frankly just don’t try and measure it. We do big campaigns in the year where we just run a branded advertising campaign. We view that as ‘long-term seeding’ the Gymbox brand into people’s minds.

This idea that it can be hard to measure tallies with Startups.co.uk and Plusnet’s research, which revealed that 71% of UK start-ups find it hard to gauge the success of a marketing campaign.

For Hilton, the marketing where it’s hard to see a direct correlation accounts for 60% of Gymbox’s budget. And the other 40%? “The rest of it is actually quite measurable. When you talk about digital, we run a Facebook campaign with an offer and you can correlate exactly how successful that’s been, right down to individual people.

“Likewise, with pay-per-click (PPC) you know how much you’re paying and we track all of that. When we do door-to-door drops or leafleting, it’s all tallied with a coupon code so you can get direct feedback on what the redemption rates are.”

7. Be patient with social media marketing

Returning to the theme of new mediums, Hilton has taken a measured approach to social media marketing.

You’d be forgiven, with instant messaging, viral videos and the rise of the Instagram entrepreneur – ‘Instapreneur’ – for feeling a little frustrated if your start-up’s social media pages don’t take off instantly.

The Plusnet and Startups.co.uk research revealed that 41% of business owners said they are ‘not very confident’ when it comes to digital marketing, so getting cold feet would be understandable.

Patience is a virtue though, says Hilton. “It’s one of those areas, social media and digital marketing, where it takes a little while to get the payback. The building of the community can sometimes take a significant amount of time.

“What we found with Gymbox is it took us a while to get our genuine avid fans engaged in social media. It probably took us two to three years to engage in a proper meaningful conversation with them.

“The difficulty in a start-up is you’ve got so many things going on when you’re setting up a business. Having something that’s potentially a longer burner, with community building and social and digital advertisement, goes to the back of the line rather than the front of the line.”

8. Focus on follower quality, not quantity

And Hilton’s not finished when it comes to social media, citing that it’s not volume but the quality of interaction with customers that’s vital.

He believes if you spend your time chasing followers, they’ll never really listen to what you’re saying as a brand. “I think there’s a tendency today for some companies to focus on the raw number of followers, and there’s a temptation to start running competitions or to buy followers.

“We’ve never done that; we want people that are going to truly engage with the brand. We’ve never paid for followers or likes. We’ve done it organically and I think you’ve got to have something meaningful to say to engage with people.”

“It’s the ability to create meaningful stories. If you want an engaged audience through social media, you’ve got to work very hard on what you’re saying, how you’re saying it, and the content you need to support it.”

A marketing guru for sure, but even Hilton acknowledges it’s not the be all and end all concluding that for all the advertising and marketing efforts, “ultimately it’s down to what the experience of your business is like”.

Richard Hilton is speaking at the Plusnet Pioneers’ marketing masterclass in London on Wednesday 1 March. Book your free ticket here , places are limited so don’t delay.

Plusnet is on a mission to help small businesses and budding entrepreneurs grow and has teamed up with Startups.co.uk to create Plusnet Pioneers, an exciting programme of content, events and mentoring. Article written by and first published on Startups.co.uk .