I need some help getting my TP Link router set up in my new house. I was using it in my old property, also with Plusnet and it worked fine. However in this property it fails to connect to the phone/DSL line, simply flashing away constantly but never establishing a connection. Diagnostics tests show it failing to synch with the xdsl line. According to Plusnet the line I'm on now is also Fibre, though it's much poorer than the line at my old property (I can only get 14-19Mb compared to around 70 at the old one).

I've tried making sure my username and password are correct, but that doesn't seem to be the issue as it's not even getting as far as checking them in the process. I've connected my router using a few different cables, including the one that came in the box. I've switched the LAN address to a different one in case there was a conflict. I also tried cloning the MAC address of my PC in case that was the issue. I've attempted both to connect it as a DSL modem and also as a wireless router, with no luck on both.

My plusnet hub one does however work, so it's not the line, I can literally switch between them and one will work and the other doesn't. I've also performed a full reset on the TP Link router, nothing has worked so far.

Any suggestions for what might be causing this would be great. Plusnet seem to not want to help as it's not a router they support, though the one they supplied is so poor that I feel I have no choice but to get this one working.

fwiw, try configuring the VR900 to use ADSL, to verify it isn't an ADSL connection.

What is the estimated maximum fibre speed reported for your line ?

If you haven't already done so, use the DSL cable from the hub one on your VR900.

Hi, I've tried both those things with no luck, thanks though.

The results of the test:

one possibility - have you tried changing the filter

Probably is, but is the VLAN ID for the WAN connection set to 101? 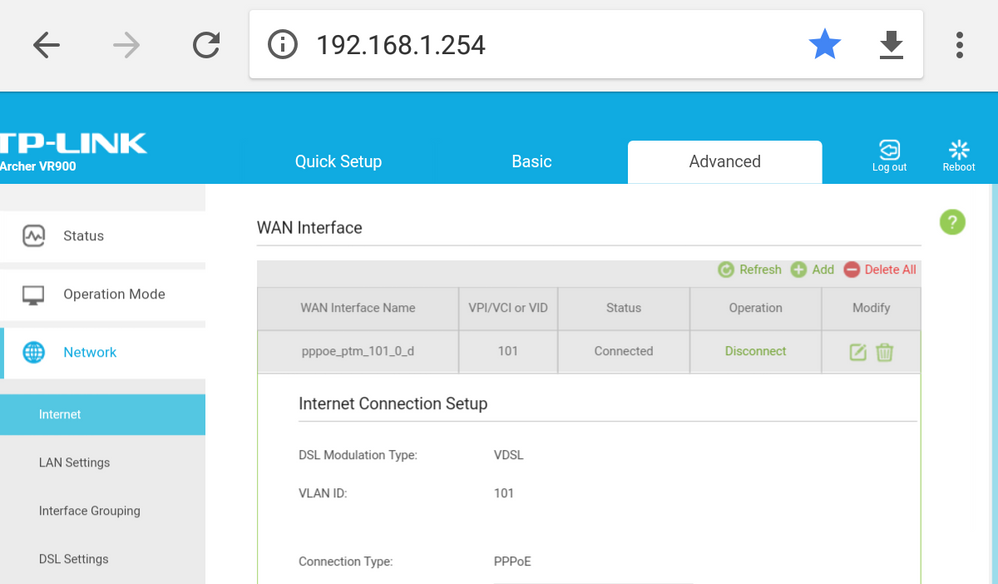