Post your stats from Draytek, together with the firmware version. Draytek does a number of different firmware codes and can also sync at lower speeds depending on the quality of wiring.

There is a dedicated Draytek forum where you might also get some help.

From my occasional interactions with them over the years, I've been impressed with Draytek's support. Have a look at

Moderators Note
This topic has been moved from Fibre Broadband to My Router.
Windows 10 Firefox 109.0 (64-bit)
To argue with someone who has renounced the use of reason is like administering medicine to the dead - Thomas Paine
Message 4 of 16
(974 Views)
0 Thanks

Maybe so, and I can confirm that, but it's not the case over the past year or so.
On at least two occasions I've had a woeful experience. And there are similar reports on Draytek's forum.

You do not provide any details. I have a Draytek router, it has been rock solid. Recent firmware upgrades from Draytek have been poor but overall it works really well - no issue. Connectivity is on par or better than Plusnet Hub I find and it allows me to change everything I want. I have a 2962ac running the latest firmware.

For those requesting screen shots... as I mentioned I used to get a sync rate of 59Mb/s 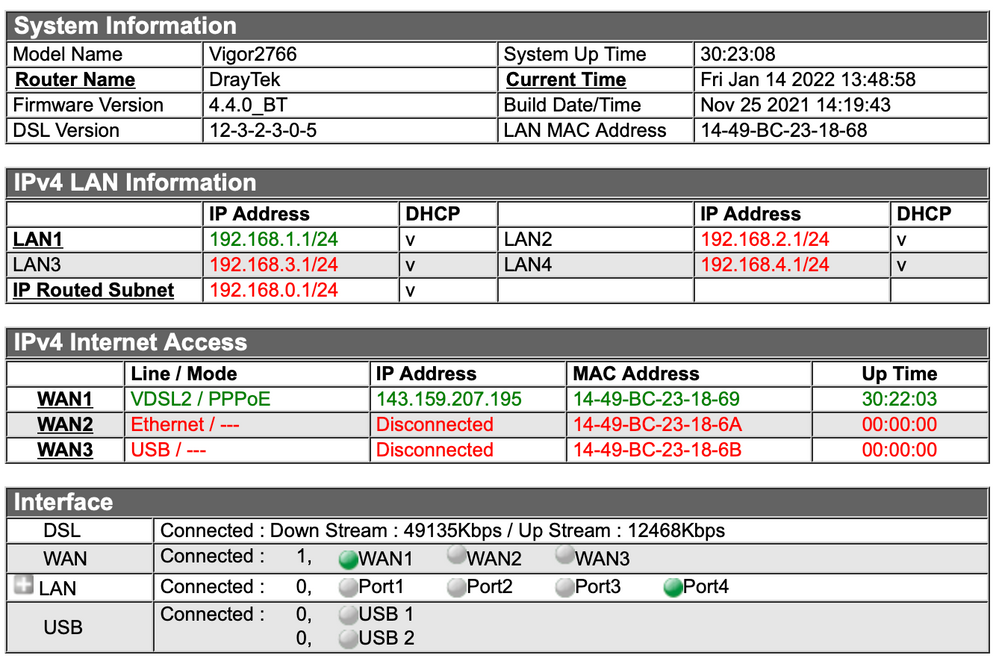 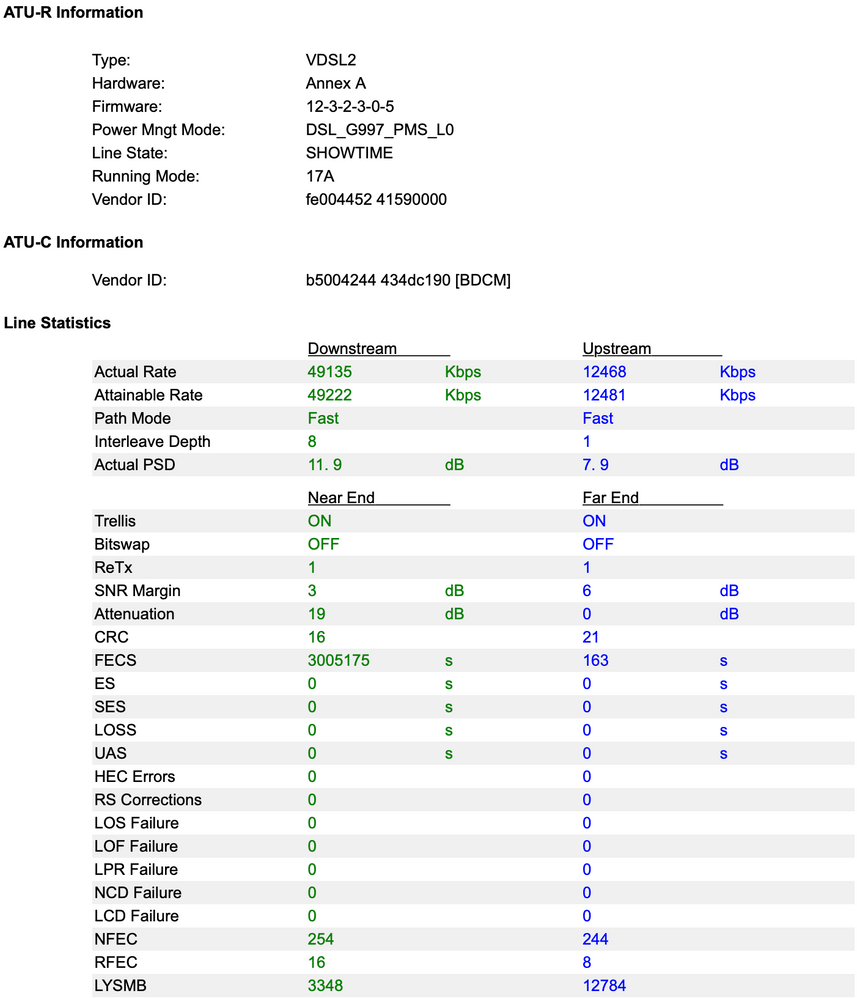 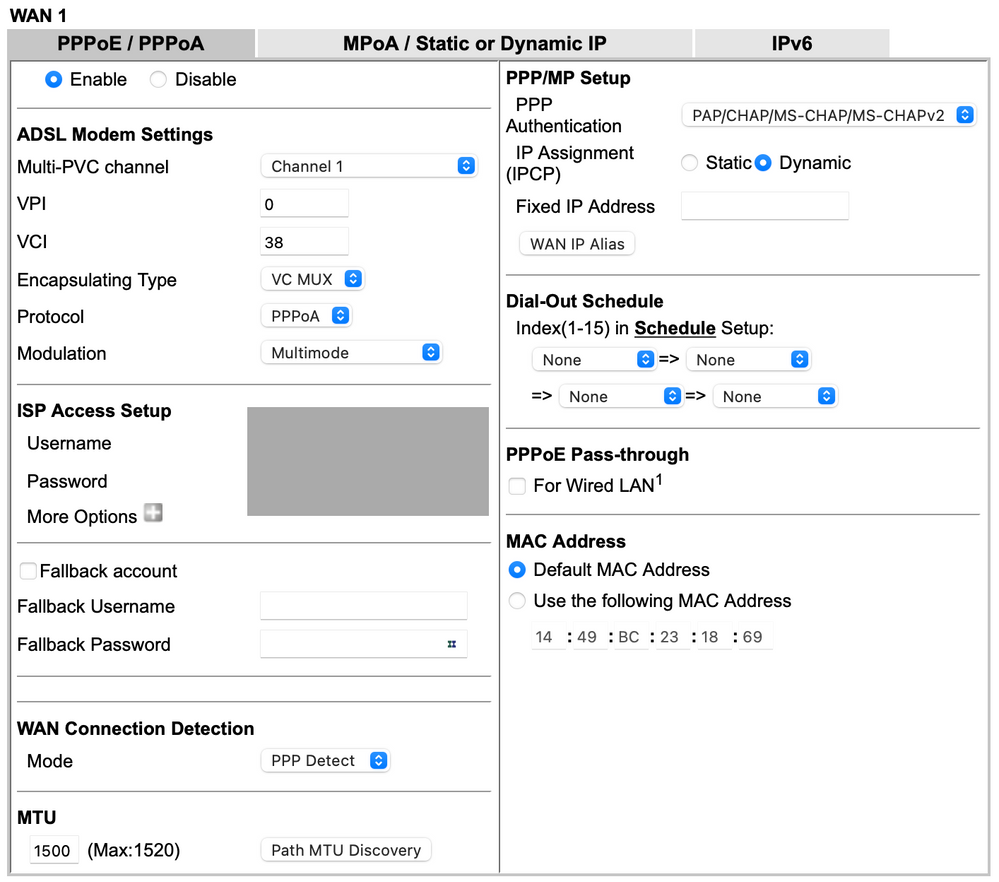 Interleaving is on on your line which suggests some issues, or could be the result of disconnections. This is most likely the reason why you're connecting at a lower rate.
In terms of MTU, the value should be 1492.
Message 8 of 16
(911 Views)
0 Thanks

There are also a lot of errors (FEC) on your line, was told by OR Engineer this will cause drop in line speed. I replaced my phone cable with Cat5e in the house to the master socket and now get this

on my download side, greatly reduced FEC and CRC errors, my line speed has gone up by 2Mb/s over time, but I am too far from the exchange to get anything more than 30Mb/s down.

All other config looks fine apart from the MTU as mentioned above. You can try the alternative modem codes provided on Draytek's website here https://draytek.co.uk/support/downloads/vigor-2766. They might help.

Ok.. but why is the PlusNet supplied box not affected by this 'interleave' and 'FECS' problem? This is what I am struggling to comprehend.

There are other routers with the same chipset as Draytek (Plusnet Hub, Fritzbox ... which have Lantiq) and they connect to Huawei cabinets ok (OP's cabinet). Some are more sensitive to disconnections than others, as @RRM says. For example, on my line, Draytek will disconnect more often than Fritzbox.

Interleaving on FTTC is likely to be the result of a fault or frequent disconnections (user intervention). You are already on 3db, so there's not much play in terms of getting Draytek to lower SNR even more.

FECS are the errors that never occurred, but which are indicative, as the previous poster indicate of issues on the line.

As RRM suggests, you should try different modem codes. You could try re-syncing at quiet times. You could try replacing the cable or filters. However, if Plusnet confirm that the line is ok, you'd need to leave the router connected so that DSLAM remove interleaving after a period of stability.

There's also new firmware released by Draytek for 2766, dated end of Dec 2021. Quite a lot of new features and fixes. However, I see that your Draytek has it already. You could experiment with alternative firmware types. However, some don't have vectoring enabled and so will reduce the speed even more. You can search for my posts on Draytek's forum to see which firmware has what options enabled.

Instead of uploading new firmware (MDM1, 2, 3), you could also select a different modem code in WAN > General Setup > DSL Modem Code as an alternative. This mean offer a better performance.

Remember though that the more you make changes to the line, the more it'll be seen by DSLAM as not stable; the main reason for that is that every time you change config on Draytek, you have to restart. Plus, you don't know how often you disconnect at other times, too.

All sound advice. I did the upgrade to the new firmware a couple of days ago. Perhaps patience is the watch word here. I'll leave it a while and see if the 'dynamic management' does something over the next couple of days/weeks.

Change the MTU to 1492 or press the discovery button to auto calculate....I had no end of problems with my 2762 modem router when it was set as 1520. I think my modem changed the value when I did a firmware update and it forgot the setting and defaulted to 1520.

As for errors reported, I get those and was told on another forum that Draytek's are known to record spurious and incorrect errors so I should ignore if it all worked ok (once I'd set the MTU to 1492). And I found that was the case, I've had a rock solid connection at better sync than the Plusnet and Openreach modem did.


You do not provide any details. I have a Draytek router, it has been rock solid. Recent firmware upgrades from Draytek have been poor but overall it works really well - no issue. Connectivity is on par or better than Plusnet Hub I find and it allows me to change everything I want. I have a 2962ac running the latest firmware.

OT and nit-picking maybe, but is that a typo as from my experience with (older now) DrayTek routers, the 29 series doesn't include a modem.  Presumably you meant 28?