Last 2 nights have had very little speed etc , latest speed tests show around the 1 Mbps !! should be 40 Mbps +

anyone else having issues ... im 6 miles inland from Bridlington if it helps ?

On fibre unlimited or should be !

Cheers for any advise ... done all the usual resets and virus scans etc and still no good

Have just run the BT wholesale test and the results are shocking ! download of 1.36 Mbps 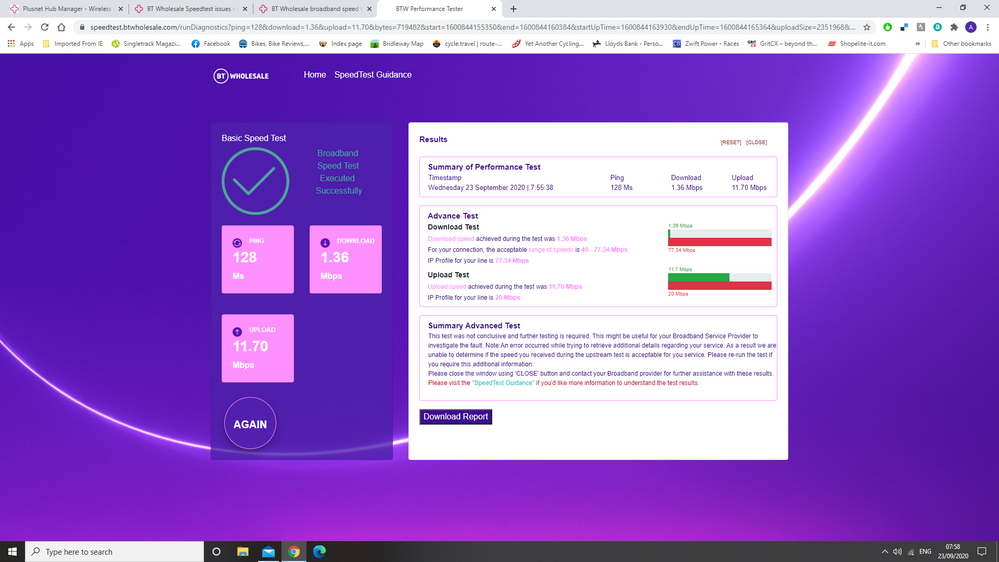 just done another test and got 0.29 !! ... spent ages on the phone yesterday to sort this ... speed was better last night but now this morning its even worse !

Together with our network partners at Openreach we will try to provide you with the best speeds possible. If you feel this is not the case, please raise your speed fault online at faults.plus.net

Thanks , the issue was raised a few days a go with a long phone call trying various things and its still no good !

paying for unlimited fibre extra and getting dial up speeds !!

yay !! .... engineer appointment booked for next week and all of a sudden it starts working again .. only 40+ Mbps , but alot better than the 1 mbps i was getting !!

Hi there @stumpym4, I can see an engineer appointment is currently booked so this issue can be investigated further. Please do let us know if the issue is still not resolved following this.

Spoke to plusnet to arrange a new router to be sent out , which I've just received email confirmation of ....

Router's over 4 years old now, ... recently moved up the country and bought old router with me etc , I should of asked for new router when we moved !

Just need to wait now for new router to appear and hopefully get some speed back  ?

Thanks for confirming that @stumpym4,

I'm sorry for the inconvenience that this has caused you. Hopefully the new router should resolve the problem but please let us know if it doesn't.