Does seem nearer the mark now and I can also run it in Edge which I couldn't do before. One anomaly is that it is showing my sync speed as 37.58 whereas Plusnet have it as 35.80. Not sure if this is because it's not been updated on the Plusnet system or whether the speed test is slightly off.

Yes, still working for me with W10 & IE11 ADSL, but the U/L and D/L speeds a little questionable.

Since moving into a flat and using the Plusnet Hub One router I have been unable to get the BT Wholesale speed test to work properly, it would give me very strange results and I would get an error when running "Further Diagnostics".

Today I set up my Billion 8800NL R2 which I have been avoiding using due to the d10 firmware causing it to randomly reboot.

But I noticed yesterday that this issue has been fixed in version d11, so now I'm trying that out.

Anyway, I have just tried the BT speed test again and finally got a sensible speed and the "Further Diagnostics" worked straight away.

Also, there is a speedtest site that I sometimes use called https://speedof.me/ which, while connected with the Hub, refused to do the upload test after completing the download test. That now works no problem with the Billion router.

On top of that, I have found the Hub to have a problem with keeping the SNR at a stable level.

There is clearly an issue with the Plusnet Hub One's firmware!

Oh, and I always use IE for speed tests.

I have also been having issues with BTWB performance tester for several months now, including some unbelievable D/L speeds although the D/L profile usually comes in at something more realistic.

Given the unreliability of this tester does anyone know of another tester which gives a profile setting in its results?

I ask this since we who have years of experience with Plusnet will be ware of the significance of the profile setting on user perceived speeds.

Sorry if this is slightly off the main subject but I think it is relevant.

I'm not aware of any other tester than can give the IP Profile.

thanks for your feedback.

My results from using the BTW tester this morning (about 20 mins ago) still weird in respect of D/L rates. I'm on the Unlimited Fibre extra service  :-

I don't use Chrome or Firefox as they give incorrect results for my BT connection - this is a known issue. I use Edge as that is now the only "mainstream" current browser that works for me. Compared to Speedtest.net BTW overstates my download, understates upload and ping is much higher

The IP profile is spot on based on the data rate. However the data rate should be much closer to the max rate so I would guess you may have had a problem , or a perceived problem by DLM , some time in the recent past since your SNR is 9.1db rather than the normal 6db. This is based on my experience of my BT connection.

Sometimes DLM just doesn't react to a line problem being cleared but at least with the BT forum a reset on a VDSL line can now be done but I don't know if Plusnet offer that.

interesting. I will try and raise the issue of the current profile on my line with Plusnet support.

Note it is a Chromebook I use, so it is the Operating System not simply the browser, My options for using other browsers are somewhat limited.

I can see you've raised a separate thread about the profile reset. We'll look at this on there instead. I've just spoken to Anoush who's still waiting to hear anything further about that BTW tester.

Mine is way out, if only i got these speeds 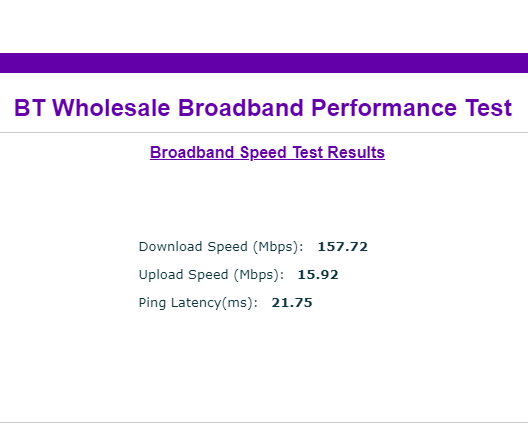 From this week I have noticed that the BT Wholesale Speed test has changed a little.

The download speeds seem ok, but the upload speed is displayed as 0 (zero).  Also, noticed that the download is done in chunks of 20mbps at a time.  This new.

Has anyone noticed this?

I've got the download/upload 20% bursts although the results are not far off normal. The broadband diagnostic tool is a complete mess though, showing a download speed of 4mbps (compared with 34.2 for  the normal BT tester (seems a fraction low) and 36.6 for Speedtest. Have tried Internet Explorer, Edge and Chrome all with the same result. The sync rate shown seems ok though, around 38.7. Just tried a further diagnostic test with no joy, getting the following message:

"The Performance Tester is disabled to support TAP3 for your broadband connection."

It's appear BTw has removed flash and use html5 instead but the download speed and upload are incorrect. Time to report this back to BTw again.

Yes, something is definitely NOT right.

I get the download in bursts of 20%, but the upload speed as 0 Kbps and the results are no where near I would expect.

Isn't it time PlusNet contacted BTw about this issue?

Both tests worked fine today after months of reporting fairytale upload speeds for ADSL. Champagne still in fridge though!
Message 105 of 166
(3,689 Views)
Reply
0 Thanks
Topic Options