I guess related to the same topic, has everyone been moved on to the new network now?
Customer / Moderator
If it helped click the thumb
If it fixed it click 'This fixed my problem'
Message 61 of 78
(2,234 Views)
Reply
0 Thanks

There a many customers who have been moved to the so called "new network", and Plusnet are claiming that hardware changes like additional caching might reduce the effects of lack of traffic prioritization (I would have thought caching would make things worse unless there is a new flow control and buffering mechanism at the customer's exchanges that has not been explained to us).

However there are many of us who were never (knowingly) migrated to the "new network", are stuck on 15 year old 20CN/IPStream hardware that will NOT benefit from anything other than Plusnet applying traffic prioritization (as it was previously implemented).

Therefore removing traffic prioritization on those 20CN/IPStream connections, will only result in even higher latency and packet loss, for those of us already suffering with the poorest performing connections in the country, and generally ruining the internet experience we had before.

@bobpullen,: Can you answer @corringham's question -

Don't forget there was a change in the routing for all Plusnet's customers on old 20CN ADSL1 only exchanges some years ago when they were all moved to IP Stream Connect. See http://www.kitz.co.uk/adsl/wbc_wbmc.htm#IPSC

I think that would only have made a change for exchanges where Plusnet have backhaul to hand over to - in the Market A exchanges, where I think most if not all of the remaining 20CN equipment is, Plusnet don't have any equipment at all so I assume they still use BT backhaul. I guess that's what makes a non-"lowcost" area that they charge extra for.

Actually I have another question now.

That question brings the whole matter back to the possibility of ASA silly quibbles over "Is a service 'sold' as unlimited using traffic prioritisation actually 'unlimited'?". Personally I suspect this has more to do with the decision than any actual technical merit.

Note it has not been removed from residual legacy MEASURED residential packages. If it's truely not needed "Its removal is unlikely to be noticed" ... why not remove it entirely from all users? If it's of benefit to those users it has been left with, by what technical criteria is it also of no benefit to those on unlimited products?

Sorry based on what has been said, the claims do not stand up to scrutiny, which leads me to believe there are other factors in play here - for example the ASA and the removal of a PN unique offering.

We've been told for years by staff that it is an obsolete feature which is only relevant to legacy metered packages which have protocols (such as P2P and FTP) that were otherwise restricted during peak times,.  In addition we were told that the "Pro add-on" was irrelevant on the current unlimited packages (which don't have protocol shaping) and that enabling the add-on was likely to make a customer's experience WORSE.

There's a strong element of: "Trust me, I'm the marketing guy." about this action?


May have overlooked it, but I haven't come across anyone 'suffering consequences' yet?

I've noticed a change in my "SamKnows" test results. Consequences certainly, but I think we're really "suffering" from the absence of something.

For background, @Oldjim noted the following:

I have tested that too: When the "current line speed" was manually set to a "too-high" value, speedtests ran a little faster (by an extra 2-3Mbps on 80Mbps syncs) than when it was given a "correct" value. That was true of SamKnows results as well as Ookla's speedtest.net

Park that issue for a moment...

For the last few years, however, my SamKnows results have shown a strange artifact (and I've posted on here before about it): With an unchanging sync speed (80Mbps), I got downstream speed results of either 72.6Mbps or 68.7Mbps. Yes, there were occasional variations as something gets in the way, but the vast majority of tests are those precise values.

From the 30th June, the tests are now almost invariably just 72.6Mbps.

So I've lost the variation and the lower speed results, but the higher speed results aren't going any faster. And that is the "consequence" that is missing:

A full-speed FTTC line ought to give results of around 75 to 75.5Mbps.

Here's the raw results from the last month:


We've been told for years by staff that it is an obsolete feature which is only relevant to legacy metered packages which have protocols (such as P2P and FTP) that were otherwise restricted during peak times,.  In addition we were told that the "Pro add-on" was irrelevant on the current unlimited packages (which don't have protocol shaping)

Probably nothing, but you never can be sure of all consequences of upgrading a live production system. If problems happen, it is always worth having the ability to rollback ... and, in this case, the "Pro add-on" allows for a rollback on an individual basis.

However, they do have a workaround to offer if someone reports a problem (and, importantly, can be applied quickly). So they can offer it, at no cost to themselves or the subscriber, but with no expectation of using it.

But what do you think Plusnet will do if such a customer comes forward? The likely answer is that, after applying the workaround, their network engineers will figure out why the wide-open configuration doesn't work for them, then get it to work for everyone ... and remove the workaround again.

While being used as a temporary workaround, it is free. No fivers being used for this.

and that enabling the add-on was likely to make a customer's experience WORSE.

The warning of a drop in performance wasn't about it being likely. Just that it could happen ... in the network design of the day. With a different network design, probabilities change.

If what Plusnet say about the "new" network is true, then the paid "Pro add-on" will now be a waste of £5 and won't cause a performance drop.

@JonoH wrote:
The brief that we have had from the people who initiated this change is that customers should not experience any issues after the removal of traffic prioritisation, for any that do adding the Pro add on will apply enhanced traffic management and thus should solve there issues.

Who are these people ?,

Why are those people not here on the forum to defend their technical justification for such a short sighted and unnecessary change ?

While we're at it, who in Plusnet management is responsible for letting loose the apparently inadequately trained support people who seem to have been guessing at replies and providing inaccurate or nonsensical answers in this topic thread.  Why isn't it Plusnet policy to ensure that all replies from staff are factual and accurate before posting such garbage.  If a member of support staff doesn't know something or hasn't been trained in something, then why the hell don't they ask someone who does know (and perhaps learn something), or use some initiative and ask an expert with relevant expertise to step in and provide a definitive response.  It's not rocket science, all we want are simple factual answers to straightforward questions. Is that too much to ask for ?

@WWWombat wrote:
(and I've posted on here before about it)

I went back to find a graphic from speed reports in 2011, when FTTC was a mere 40/10 speed. After BT altered the cabinet to 17MHz, I got full sync speeds, but my download speeds would be either 35Mbps or 37.5Mbps. 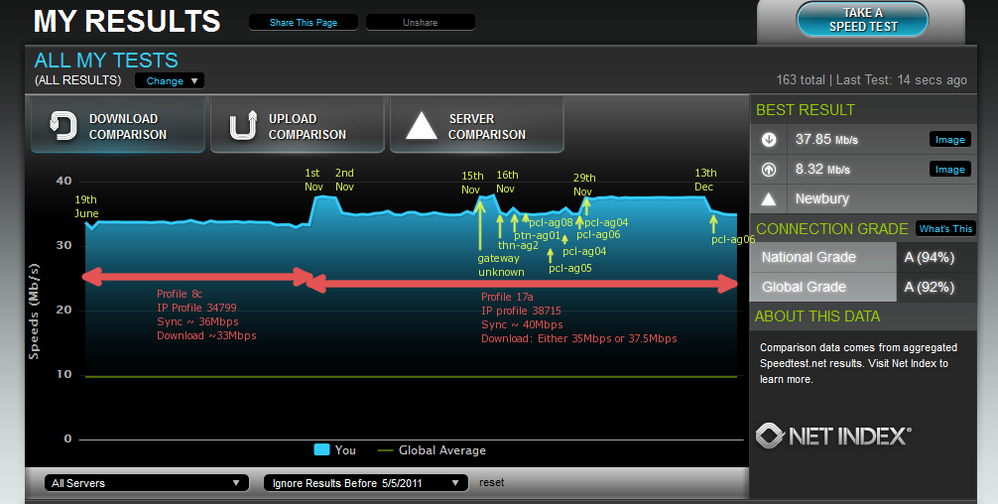 
If what Plusnet say about the "new" network is true, then the paid "Pro add-on" will now be a waste of £5 and won't cause a performance drop.

"most people won't notice" is probably true, but those on slower connections in shared situations with gaming, streaming and p2p hitting the line at the same time will, and p2p vs streaming won't be "fixed" in the same way it used to be.

Not having a slower connection, I can't say for sure how bad/what buffer size PN use.

Not that bad for me and I can do my own downstream QOS if needed anyway (involves sacrificing some bandwidth).

I think the lack of need for PN to use this on their own network is a distraction from the degradation/loss of selling point that they used to have by controlling the customer facing buffer. Maybe the ASA ruling is the driving factor in our loss - but then charging extra to get back less than what was lost stinks.

I haven't got any graphs to show any changes on my ADSL Max Premium connection (the TBBQ graphs are always scary, and the speed tests are usually fairly consistent), but I did watch the Channel 4 Dunkirk documentary on catch-up last night, and it only buffered four or five times for a few seconds each time, which is better than usual. And that was with a data download (limited to 100kbps) happening at the same time.

However, that was All 4 rather than iPlayer, and it was a Monday, so no conclusions can be drawn from that at all.

BTW the Dunkirk documentary was very interesting, and I'd recommend everyone to watch it.