My broadband has suffered from terrible ping spiking for as long as I've had it. I've moved flat recently and the problem seems to be even worse now, but here's the gist of it:

Broadband speeds are fine, and most downloads go on without a hitch, and I can watch stuff/browse to my heart's content. Anything that requires constant little updates i.e. gaming is a laggy unplayable mess. I've done a ping test on netmeter.co.uk, a ping of ntp.plus.net, and a ping of the router. The results of these tests are attached as images. You can clearly see that pinging the router is absolutely fine, but the external connection is where the problem lies.

I've also done the test with my mobile, sat right next to the router, and I was still getting the mentioned issues.

I've reinstalled my network drivers, and my network card is an ASUS PCE-AC68, which whilst WiFi, is a very high end card. I know that ISPs like to attribute network issues to WiFi, but as I mentioned previously, even when sat right next to the router using my mobile, the issues were still present and pinging the router directly has no ping issues at all.

Worth mentioning also that this is not a constant issue - it seems to change daily. I was playing at 9am this morning as I was working the late shift, and I was still getting the issues. As 9am is definitely the furthest thing from peak times, at least in reference to gaming, it makes me think that the problem isn't that the line is under load.

Hopefully someone can help me out with this, as it's driving me mental. Thanks.

*edit* I should mention that I live in Abingdon in Oxfordshire, and that VOIP programs are also affected by the constant ping spiking.

This is the GEA test for your line: 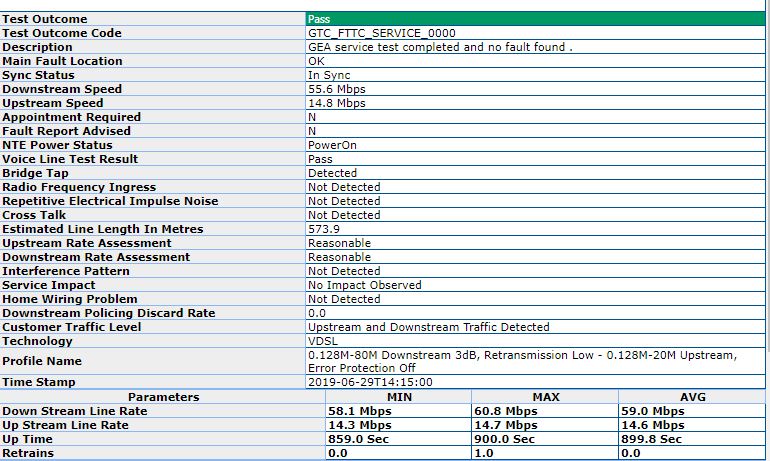 There's a bridge tap detected on the line which could cause the problems you've noted. So we can progress this we'll need everything unplugging from the line (router, phones, extension leads, alarms, TV boxes) so the sockets related to the number associated with your broadband service are bare.

Hi, thanks for getting back so quickly on this!

Unfortunately I'm out of my flat for a week, something that completely slipped my mind when I posted this last night.

Would we be able to stick this issue in a pending/blocked state and pick it up in a week's time? I'll be back home on the Monday after next.

Absolutely no problem @LiamPain. Just let us know when you're back by commenting on this post.

Hi, I was back at my home as of yesterday, and the problem wasn't present so I held out on resuming this case, but unfortunately it's back with a vengeance today, with massive ping spiking yet again. Let me know when I need to unplug everything from the router and I'll get it done.

Worth mentioning that I'm now using a power line adaptor as well.

Hi there, now could be a good time if you're able to unplug everything from the line

If now isn't a good time we can arrange a 30 minute window for that with you at any time between 7.30am and 10pm on any day.

If this post resolved your issue please click the 'This fixed my problem' button
Message 6 of 18
(1,451 Views)
0 Thanks
LiamPain
Hooked
Posts: 8

Cheers Liam, leave it that way for at least another 10 minutes if you can and I'll run the tests now.

I've just finished the test and it's still picking up on a "bridge tap" can I just check that you unplugged everything from the phone line with the exception of the router?

If this post resolved your issue please click the 'This fixed my problem' button
Message 9 of 18
(1,436 Views)
0 Thanks
LiamPain
Hooked
Posts: 8

Ah sorry about that, interpreted your original instructions to include unplugging the router too. I'll go plug it in

No worries, it's just everything apart from the router. Let me know when you have and I'll get it tested again.

If this post resolved your issue please click the 'This fixed my problem' button
Message 11 of 18
(1,430 Views)
0 Thanks
LiamPain
Hooked
Posts: 8

Hahaha! no worries, I'm just doing the "real" test now and I'll let you know as soon as that's done.

We're still seeing signs of a bridge tap, it would be worth us doing one more test, this time with everything disconnected again but with the router in the test socket: https://community.plus.net/t5/Library/Testing-From-The-Master-Socket/ba-p/1322242

If this post resolved your issue please click the 'This fixed my problem' button
Message 14 of 18
(1,418 Views)
0 Thanks
LiamPain
Hooked
Posts: 8