Wake up via wifi

Wake up via wifi

I have just received an Amazon Echo as a present, and wanted to use it to play music, but I don't want to pay a tenner a month to Amazon or Spotify, so I found a "skill" that allows me to use my desktop as a music server. Leading on from that, I want to be able to wake my desktop from sleep modefrom my phone or laptop.

Good old Google has lots of suggestions (mostly very similar, as you'd expect), and I have followed the instructions (I think), butI still can't connect.

The most recent software that I've used, does ping the desktop, and can say if it's on or off, but I can't instruct it to turn on or off.

The bios allows wake on lan, Magic Packets are enabled and so on.  I've set the firewall to allow RPC commands  from my private network.

What am I missing?

This is mine for example:- 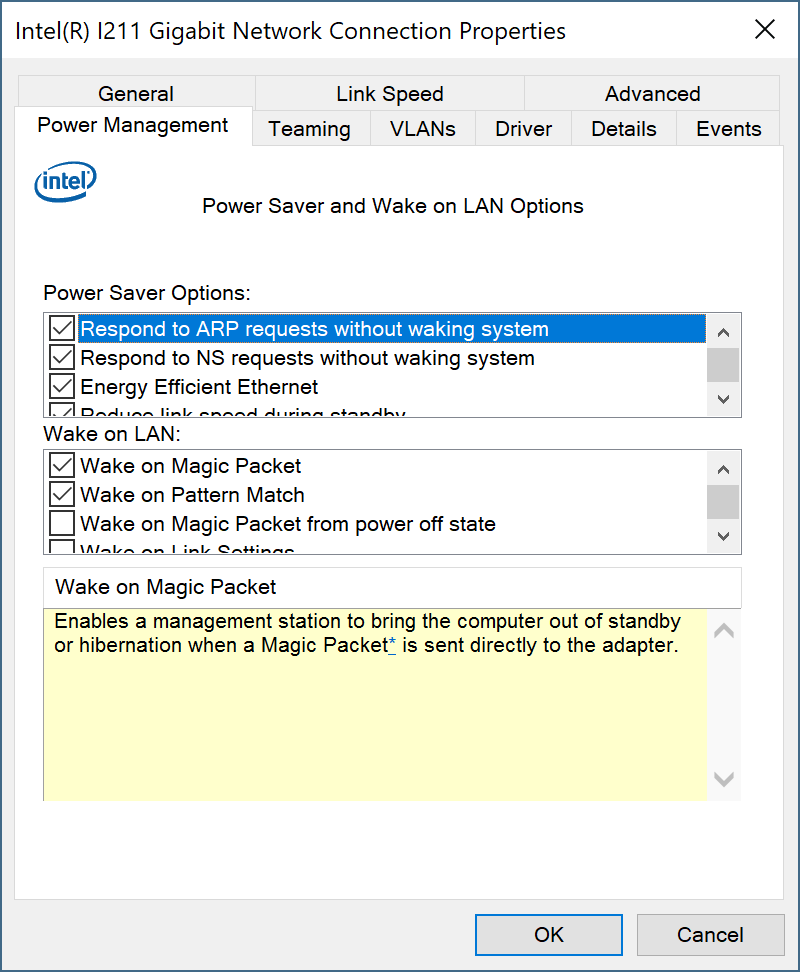 Thanks for the response. Mine looks quite different, and from the sites I've looked at, is the norm. Under "Power Management" there are three options. The only other setting, as far as I know, is under Advanced, and that is the "Wake on Magic Packet" one.

If your desktop is sleeping/hibernating, it will be in a very low power usage state - so wifi will be switched off.

In fact, you've explicitly ticked the "turn wifi off" box.

Now if your desktop had proper ethernet cabling it would work - provided you could instruct the router (or other device) to send the appropriate magic packet.

Perhaps a Raspberry Pi (or similar) could do this for you?

A number of Google searches came up with a similar answer; unfortunately they don't seem to work in my case 🙂 so what am I missing.

You can't use a wifi connection to send wake-up packets, because it switches off when the PC sleeps. 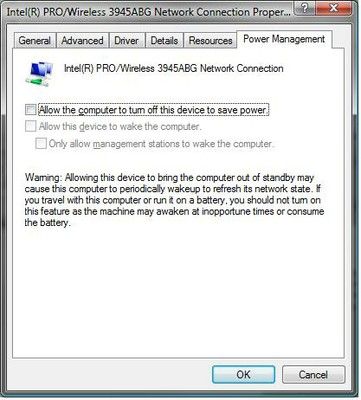 I've had to do this and untick this a few times for machines at work where they're static machines but kept on wifi. Like people have mentioned above just make sure the power settings are set accordingly so the device doesn't have any power saving options on the wireless.

But once this was done it's worked for us on the few machines we needed it for.

I've Googled this, and there are conflicting messages. Some say that it is possible to wake over wireless LAN, and some say it isn't. I can understand that, if the computer is off (no power), then it can't receive a signal, but in sleep or hibernation mode, power is kept to maintain some function, so, in theory keeping power to the wifi adapter should enable it to receive a signal and respond to a wake up nudge.

If I manage to find a solution, I'll come back.

It does work over WiFi, why else would the options be there?

Only thing I can think of now is to ensure the chipset & network adapter drivers are up to date.
Live router stats
Message 9 of 12
(951 Views)
Reply
0 Thanks

I think it's the difference between wake on LAN (WoL) and wake on wireless LAN (WoWLAN). I think WoWLAN is now possible, but my desktop is 5 years old (I know antique 🙂 ), so it may not work for me. I have tried to update the wifi adapter drivers, and it says that I have the most up to date drivers installed.

You'd think if the option was there though that you would be able to get it to work. But it could be that they've given you that option but the device is slightly older and doesn't have that functionality available to it. Although when looking online I did see a few older drivers where people have managed to get it working on older hardware.
Soon to be moving... & Got to switch provider.. So thats why i'm here!
Message 11 of 12
(928 Views)
Reply
1 Thank
1 user liked/thanked this post: John_Hull.

There are about 4 levels of sleeping to save power; one of the first to go is wifi.