Can you just change an existing hard drive for a SSD ? If so is it a simple matter of plugging it into the same connectors as the hard drive or is there more to it than that ?
I am asking this should I have any reason to think my existing hard drive was on the way out.
We are born into history and history is born into us.
Message 1 of 17
(3,793 Views)
Reply
0 Thanks
16 REPLIES 16

As for fitting into the same connectors or spare connectors inside your case,
It is hard to say as we do not know what make model your pc is and what connections you have
sometimes its as simple as plug and play and sometimes you may have to change settings in the BIOS (Basic Input Output System)
Message 2 of 17
(1,123 Views)
Reply
0 Thanks

Yes it is simple as that !
However if you are using an OS that is more than a couple of years old, you might want to read up on how to format the SSD so that the partitions fall on a particular optimum page boundary, so that SSD writes are minimized by having the drive format correctly aligned, rather than having sectors spread across flash memory page boundaries.
You should Google the model of SSD and the version of OS, to find the preferred settings.
Plusnet FTTC 80/20 IPv4/30, Hurricane Electric 6in4 IPv6/48, Pulse8 landline & calls, SamKnows 600N
Vigor 130 modem, pfSense 2.6.0 router, DrayTek WAPs, Devolo dLAN 500, Gigaset N300A-IP VoIP DECT
Message 3 of 17
(1,123 Views)
Reply
0 Thanks

From what I read when I installed my first SSD cloning was an option but a full clean installation of the OS was recommended.
This is due to the difference in page boundaries as mentioned above as well as differences in how the data is accessed.
I went for the clean install.

Mav is onto a good topic here because I also have a question!
If your system comes with an OEM OS (EG I have Win7 pre-installed) what happens then?
I have an image on a hidden partition but I can burn that to CDs (can't be bothered lol!).
How is that handled?
I need a new signature... i'm bored of the old one!
Message 5 of 17
(1,123 Views)
Reply
0 Thanks

Sometimes fitting a SSD is not as easy as you think, depending on the age of your PC.
older PC,s will normally have a EIDE cable to connect the HD this will not ! fit to a SSD , also the power lead is different.
dick:green Duplicate post removed.

If you were fitting an SSD to a machine with only EIDE connectors, then you would need to choose an EIDE (rather than SATA) interfaced SSD.
These EIDE SSDs normally have the 44-pin laptop connector which has both the data and power pins in one connector.
If you needed to fit one of these to a PC that had separate 40-pin IDC ribbon + molex power, then you would require an adaptor such as these - 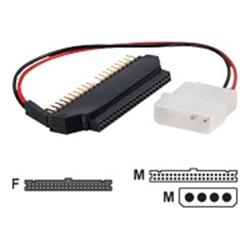 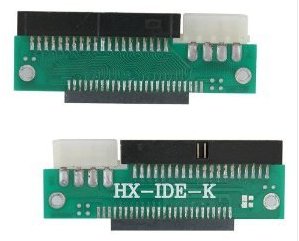 Having looked at the specs for EIDE SSDs, the read and write speeds are generally poor compared to the fastest EIDE hard drives, so the only gain you will see is the near zero latency of the SSD compared to mechanical hard drives.
Alternatively, you could buy an SATA interface card to fit in a spare PCI slot, so that a faster and cheaper SATA SSD could be used.

Thank for the responses, some very useful information in response to my original query.
Based on what's been said on this topic I would be going for SSD should any problems occur with my HDD's
Fortunately I have got Windows 7 on Disk so would go for a clean install then add Linux for a dual booting system.
We are born into history and history is born into us.
Message 8 of 17
(1,123 Views)
Reply
0 Thanks

You can put the mainly read-only parts of Linux on the SSD and the write-intensive bits on hard disk.
You can't easily do that with Windows.

Another thing to remember is to turn off the Paging file for the SSD.
I have 16GB RAM and the paging file is set to 16GB on a separate internal HDD which, as far as I am aware is rarely, if ever, used.

With Windows 7, just create a full system backup image with Windows 7 backup, boot from the Windows 7 DVD in recovery mode, and restore the backup to the SSD. It should even take care of aligning the partition for you.
Assuming that you aren't changing a load of other hardware (e.g. CPU, graphics card or network card) at the same time, it shouldn't complain about activation.
There is one possible complication. You're really better off running the SATA controller in AHCI mode, and that way things like TRIM will work properly. If it's in legacy IDE or some nasty proprietary software RAID mode (e.g. NVRAID), you won't get TRIM. Without TRIM, you will get performance degradation of the SSD over time. If Windows has been installed with the SATA controller set to IDE mode and you change it to AHCI (in the BIOS), it might fail to boot (although I have done it before, but can't remember the exact steps that I took).
Message 11 of 17
(1,123 Views)
Reply
0 Thanks

Move all disk cache's such as the browser cache to hard disk...

not all mobos support achi as i have found to my dismay.
i have an asus p5g41t-m lx  and have been trying to activate achi for two weeks until i found out today that there's no support on this mobo.
despite this win7 runs a hell of a lot faster on sata ssd than on ide hdd and yes i know i won't get trim support but i'll just have to live with it.
i've learned a lesson for next time but i'm not sorry i went for it.
jack
Message 13 of 17
(1,123 Views)
Reply
0 Thanks

You could look at http://forums.pcper.com/showthread.php?444831-HOWTO-enable-AHCI-mode-after-installing-Windows
Alternatively use Linux and just type one word into a configuration file.
Although you won't get command queuing, it won't make any great speed difference.
It will reduce the lifetime of the SSD.


thanks for that link but i have downloaded and installed winfixit for the subject matter and changing the bios from "enhanced to compatability" rendered all sata boot devices undetectable. naturally i have reversed the bios setting.
reference to achi in the boot menu is null---------i just cannot find it-------mobo doesn't support it.
which part of the mobo doesn't support it i wonder------could i replace the cpu to achieve my goal--i'll have to research it via google.
jack
Message 15 of 17
(1,123 Views)
Reply
0 Thanks
Topic Options