Powerline networking - how to block it?

Powerline networking - how to block it?

Due to some little swine in a nearby property being a total menace and urinating all around the residents car park (our car being hit two days ago) we need to get some CCTV up.

So I'm thinking an IP camera will be easiest to use rather than a complex setup using normal CCTV. The problem is getting a network cable out to the garage will be a pain. I just about managed to sneak a mains wire out through the skirting board at an angle and through a gap under the french doors in the bricks - conveniently located that was! I don't think I'd dare to try another cable though so I'm looking at powerline networking.

I have two redundant powerline adapters that I bought ages ago and stopped using due to the RF radiation risk and my little lad.

Now I'm thinking that if i can somehow isolate these to only work on the wire leading out to the garage without the signal getting onto the house wiring, I'm sorted.

Is the proposed location of the camera too far from your router to be effective over Wi-Fi?

I have 2 cameras, one on ethernet and one on Wi-Fi.

Windows 10 Firefox 107.0 (64-bit)
To argue with someone who has renounced the use of reason is like administering medicine to the dead - Thomas Paine
Message 2 of 10
(1,705 Views)
Reply
0 Thanks

No but the signal is a bit flaky and I'm wanting to avoid millions of bits of data being sent by RF.

Also as the cameras often use a IE applet to do the real time monitoring it would mean a constant video stream.

Having looked on google it seems some surge protectors filter out RF. I'm wondering...

The current lead to the garage is plugged into the mains using a RCD plug like this: 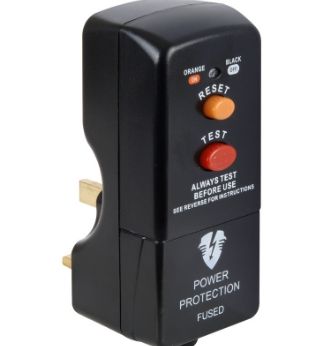 Now if I unplug that from the wall socket and plug a surge protector into the wall socket and then plug the above plug into that with a powerline adapter also plugged into the surge protector and another in the garage... will that allow the ethernet signal out down the wire to the garage while blocking it to the mains circuit or will it block all 4 sockets RF individually?

I suspect that you will have problems getting the data through the RCD without losing a lot of bandwidth but why not try it?

Have you thought of using a camera with built in srorage?

Yeah I had thought of that but as the thing will be at low level it would be potentially vulnerable. Plus those cameras are more expensive.

If a surge protector will filter out the RF between itself and the mains but not between sockets then I think that may well be my answer but i was hoping others might have experience of this or other ideas.

Isn't the effort/expense a bit over the top?

What are you going to do if you are able to produce film evidence?

Don't say they won't do anything, it depends who you talk to and how hard you push.

Expect a chunky brick through your window if your plan "succeeds".

They're triple glazed so that isn't a worry!

The car windows on the other hand.... but then thats what CCTV is for right?


The car windows on the other hand.... but then thats what CCTV is for right?

If during hours of darkness, then depending on the lighting conditions and low-light capabilities of your camera, results can vary from useless images to being able to identify a perpetrator.

I have colour video (using an Axis P1354 network camera) of a male person chucking a rock through a car window parked in the street nearby at 1:35 am about a month ago which is quite clear and, according to the copper who viewed it, good enough to identify the person, and she did say that most of the CCTV they view is pretty much useless.  The car did happen to have a DVLA clamp on it though (no road tax), and it may well have been the unhappy owner who did it!

On the other hand I have seen some friends B/W (cheap infra-red illuminated camera) night-time video of their neighbour stabbing their car tyres on unlit ground at the rear of several properties which fell into the 'useless' category and which the police refused to act on.  Even though my friends could recognise the neighbour from his walk etc., and see that he came out of the rear of his property, the police (probably quite correctly) said you couldn't make out his face.

It's difficult to get decent evidence-level night-time video without at least some lighting so unfortunately you may just end up with a useless video of an event.