Plusnet and my browsing history

Plusnet and my browsing history

Plusnet is "forced" to save my browsing history (and associated data) for at least a year, thanks to our crackpot government and (sad to say) weakness of the opposition.

Just looking at possibilities to pollute my browsing profile & I came across an unusual site:-

Domain Tasting -- What is that?

Domain name tasting is the practice of registering hundreds of domain names for the sole purpose of monitoring their marketability while taking advantage of the five-day grace period offered by the registrars.

At any time during five-day grace period, the registrar has the obligation to fully refund the registration fees upon request.   During the five-day grace period, a Return-on-Investment (ROI) analysis, conducted by the "Domainer", is used to determine whether the income produced from advertisements, placed on the parked domains' websites, are enough to warrant keeping the domains, or whether they should be returned for a full refund.

Many of the domains registered are names which were previously registered but have recently expired.   These expired, and now resurrected domains, will usually still be indexed and will still be active in search engines and/or are still referenced from other websites.   These resurrected websites continue to receive enough traffic such that advertisement money earned is enough to cover the cost of the registration.   Domains / websites that make money or at least have the potential to make money are kept all others are returned for a full refund.

The practice is controversial as these "Domainers" typically register many millions of domain names each year, use them for free, for five days, and return the unprofitable ones.   These temporary domain name registrations far exceed the number of domain names actually purchased for legitimate purposes.

Many registered domains are misspellings of popular websites.   These domain names / websites depend on internet users mistyping a popular website's name; Thus receiving visitors which were meant for other, correctly spelled, websites.

Many of these sites appear to be still active - even though the names are very weird.

I'm wondering whether running wget as a low priority background job against a random list from many thousands of domain names would count towards Plusnet's archive of my browser history?

Yes, I'd say so...  I had not known that wget can use HTTP / HTTPS but having some background task doing that would fill logs with DNS lookups as well as web traffic from, as you say, a series of largely useless random sites.

I'd definitely be interested in seeing any final scripts (although I have to admit I have started to consider doing DNS lookups via one internet connection (and servers like 1.1.1.1  9.9.9.9  and 8.8.8.8 ) while my web pages would be loaded via a VPN connection to a server overseas (not a regular VPN service, but using the free Jigsaw [1] 'run your own VPN' code).   I know the VPN would be identifiable but if it is not logging the traffic there's nothing much to find if it is examined.  Later when secure DNS lookups are possible it won't even be so easy to know what domains are being used.

It's not that I'm paranoid, nor doing anything illicit, but dislike the nosy 'big brother' attitude of governments, often under the guise of detecting terrorists, or protecting children, but potentially allowing any government agency to snoop.   We have had councils, in the past, overstepping the mark, and eventually those abuses have come under scrutiny, but it's creeping out from the spying level down to police and councils, yet they cannot seem to stop bank account transfer scams, not junk mail (which would cut out a heck of a lot of traffic (!))

Over in the US the power to inspect cloud held storage (and I believe it will be worldwide if a US company owns the storage) means their privacy is being invaded even more than ours, or has the potential to be, and without many hurdles like court orders and judicial oversight.  BICBW.

[1] Jigsaw is a subsidiary of Alphabet / Google and recently released open source code to provide a user with their own VPN server.  All you need after that is some hosting firm that allows you to run your own code and you have your own private VPN service...

I did setup a script which utilised a cron job to run a script periodically against a random extract of a list of web sites which had been found to exist (using dig).

I wonder what the effect on my router of any caching is (assuming it does so)?

That script uses a couple of uncommon features - so feel free to ask!

I've setup a dnsmasq local DNS cache which uses 1.1.1.1 - but this is transparent.

Note:- elinks is a text only browser, although it seems to process Javascript.

Glad I spotted your note about elinks...  first couple of runs ended in a flash

I'll be trying this out.  (I leave this Ubuntu box on as it is responding to my Thinkbroadband line quality monitor.

(Not sure if the Hub One could respond to pings, but if it could, I'd love to enable that...  better than having to use DMZ and leaving this Dell box on all the time.)

The Hub One doesn't respond to pings.

Why do you want your router to respond to pings?

For setting up a Thinkbroadband line quality monitor...
Live router stats
Message 7 of 14
(4,709 Views)
Reply
0 Thanks

Indeed.  For those unaware, I've added a screen grab from my connection (with a fixed IP from Plus.Net).

NB a few details erased from the image such as the IP and my nickname for that particular connection.

Thanks for the tip on using the Now TV box.

Luckily I have one which is connected by a cable to the router so will be very easy to use.

This is my live graph...

I've started running a speedtest every 2 hours - at present I just write to a log file & produce plots on demand.

It uses several different web sites & I do record distance & ping times - but I don't plot them. 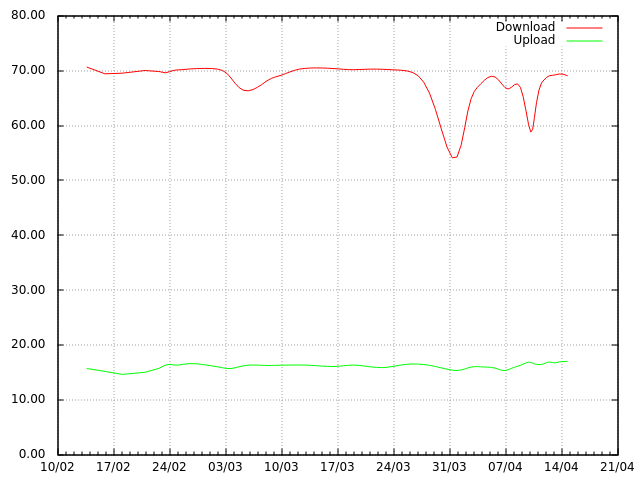 That seems to be some kind of Windows program.