Following on from my post here I am trying to get to grips with Outlook 2016.

It seems that each email account I set up, e.g.:

creates a new pst file within the Outlook Files folder on the SSD.

What I would rather have is one pst file for each domain which will have there own folders within Outlook to filter emails into: eg. mydomain1.uk with 'myemail', 'another' and 'third' folders and mydomain2.uk with 'one', 'two', 'three' folders.

Maybe I am over-complicating things but any advice or pointers to a decent tutorial would be greatly appreciated. 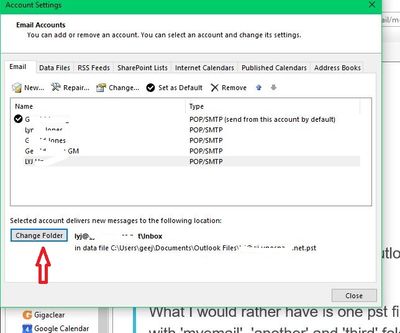