One of those days..

One of those days..

Last week i bought two second hand mini itx motherboards - D525MW. Specs are decent enough on paper and i got them at a bargain price. I wanted two purely because i tend to have utterly awful luck and knew that if i bought just one i'd have nothing but hassle.

So yesterday and today i've been trying to get one / both working. No luck.

First of all the optical drive i used (been hanging round spare for a while) kept messing when it came to opening - several presses in the magic hole with a paper clip reminded it how this works and so it is no longer a problem.

Tried a couple of linux live CDs... they also refuse to run much further than the initial stages..

Got the other board out.. same thing repeatedly. Ok I thinks, it can't be a fault with the board, both are stumbling on something. So I ring up the sellers and speak to their tech man who says they ran XP SP3 and it was installed from a XP SP3 disk - not upgraded once XP was installed. Further googling also revealed another intel mini-itx user of a different model saying they could only get XP running with a slipstreamed disk containing SP2. Okay, so I grab that XP inc SP3 disk... 40 odd minutes sails by while the basic installer is copying over some files it needs to run before starting the install... get that done.. then the "windows setup is starting windows.." and 10-15 minutes later I get another BSOD

Meanwhile i've noticed that my HDD is now chirping and momentarily powering down for a split second before spinning back up... and only since using this Windows disk. Oh yes and I've already tried XP 64bit yesterday.. that didn't want to know either. It would get further than my other XP disks but would then also give up on copying one file over from the CD and offering to keep retrying or skipping.

Logic would say its not the motherboards but the bits attached however it doesn't seem to matter what i try, I cannot get these ******* motherboards to get anywhere near installing or running Windows.

Now the HDD has started chirping with this version (never straight away - a reset stops it until it gets about 2/3 into copying files) and then throws the above error on the same stage. I find myself wondering what I should do next - if anything. Should I try to locate another HDD and have another go (risking money if it still don't work), try burning another XP CD, give up and admit defeat, trash the sellers ebay feedback or just take the boards outside and stamp on them and then finish them off with a hammer?

I'm running the ultimate boot cd now and it did earlier claim to find faults that it fixed but i can't see bad sectors being responsible for the chirping and momentary loss of rpm. I'm now performing a full format (god they take forever don't they) and yet not heard any chirping once.

I need a new signature... i'm bored of the old one!

You have a dodgy RAM stick, used to get the same messages at the computer shop when repairing computers when they had dodgy RAM, swapping out for a known good or new stick fixed the problems immediately...

Whenever I have encountered a variety of different but frequent errors I have traced the problem to a faulty RAM memory module.

Another vote for dodgy RAM

Customer / Moderator
If it helped click the thumb
If it fixed it click 'This fixed my problem'
Message 4 of 16
(1,184 Views)
Reply
1 Thank
1 user liked/thanked this post: rongtw.

I just looked at the manual, does yours have two sticks in it?

I guess if two, you can take one out (well a 50-50 chance or try the other one) and see if it makes any difference. You’ll have less RAM of course but you may be able to get the OS installed.

Saves spending money on a new one and finding it doesn’t make any difference,
Message 5 of 16
(1,160 Views)
Reply
0 Thanks

No it only has one SODIMM.

I could certainly agree the ram was suspect on one board... but two at the same time?

Both came packed in anti static too. The seller has feedback from others leaving glowing reviews for their boards.

@7up - As I see it you can narrow this down to the common components in use, namely your HDD and your DVD / CD Reader, if I were a betting man, I'd be inclined to point the finger at the HDD. Do you have something else you can use to to test, even a small 16GB+ USB disk is worth a try using a minimal Linux install to prove that it's not the Reader and Board and that the disk is at fault.

Either that or the reviews are just lies (as shown on TV last night), or you've just been very unlucky and got two duff boards.


The seller has feedback from others leaving glowing reviews for their boards.

Well this is your chance to redress the balance and write a review saying that you bought two boards with RAM and neither of them worked.

@Anonymous I don't have any other data drives to test unless I cannibalise an existing machine but that would take hours to back up. I do have one 32gb USB drive but have never installed an operating system to one yet alone run one from one. What's the quickest and easiest way?
I need a new signature... i'm bored of the old one!
Message 9 of 16
(1,089 Views)
Reply
0 Thanks

Provided the MB supports bootable USB media then stick the disk in the slot and install as if it's a fixed disk, it needs no special treatment. But I'd do a Linux install as this will be the quickest option to provide the proof you need.

I managed to find a spare 1GB SODIMM which i've now tried in the board. Same flaming error - exact same error code and address! 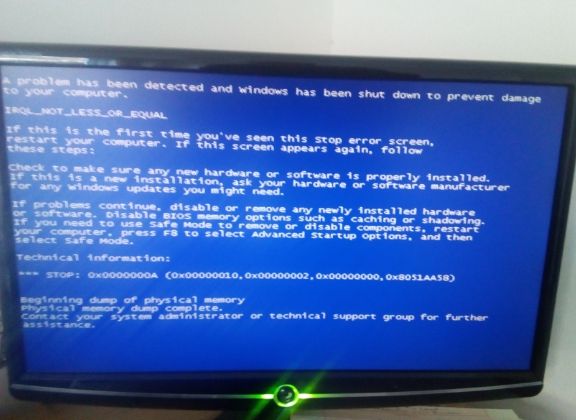 I have a second XP (inc SP1) disk and that crashes saying it can't copy u_delete.exe or somthing similarly named right at the end of the file copying process (something like 97%).

I guess it could be another faulty ram module but at the exact same address? - How likely is that?

Also I did test the supplied ram with MemTest and the Microsoft ram checker on the ultimate boot CD. Some 3 hours of testing (maybe more) revealed nothing.

This is what happens with my XP (inc SP3) disk: 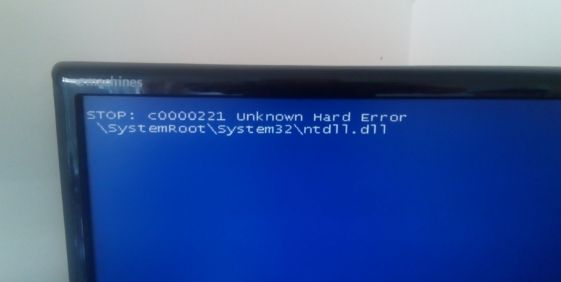 As for Win XP 64bit I can't even remember what happens but that also gives up with a totally different error.

All 4 disks seem to crash at exactly the same point on both boards. I've not bothered swapping the spare SODIMM on the other board - going by this most recent test it seems pointless.

Perhaps interestingly I did run the maxtor tool from the ultimate boot CD on the drive and let it perform an examination. It did claim to find faults but then reckoned it fixed them and I've heard no chirping from the device since - not even on the XP-SP3 install. I must admit though i'm not a fan of maxtor drives as i've had issues with them in the past.

Going to try the USB method now, gonna boot up the bit machine, copy the contents off the thing, wipe it and go for an install.


I have a second XP (inc SP1) disk and that crashes saying it can't copy u_delete.exe or somthing similarly named right at the end of the file copying process (something like 97%).

Although I don't remember whether it was Win98SE or WinXP, I've experienced that problem multiple times in the past (not that file in particular).  I used to put it down to incompatibilities between the optical media (i.e. faulty discs) and the optical disc reader, but I had a workaround.

As the discs being used were ones I had written myself on CDRs, I reasoned that there were errors on the disc at the point where the read had failed which might not be present on another copy.  At the stage that the copying of a file from the first disc failed, I would eject the disc and insert another copy (identical apart from errors), which then invariably allowed the problematic file to be copied.  Sometimes the second disc would then encounter an error further on in the copy process, at which stage I would eject it and insert the first disc.

Whether it was the discs or the reader at the time, when you've only got a single optical disc reader and you're using CDRs you sometimes have to go to those lengths!

I had been mulling over the thought of a duff CD but then surely.. i can't have 4 baddies?

I'm not so sure the optical drive could be at fault if it can read the rest of the disk. I've been looking up some things online regarding this and others who've had the same message and error code / address are saying it was a driver issue to do with the motherboard.

I'm going to slipstream a SP2 disk and see that that works instead of SP3.I'm also going to burn the CD at a much lower speed. I've only got two left so getting a bit desperate now lol.

XP with SP2 slip streamed into the install disk seems to have done the trick.

No idea why as SP3 would not install at all. Now i'm seeking the drivers out... managed to find ethernet, audio and VGA on intels website.. need to find PCI too but those main three will do for now...

I've got it running on XP Pro SP2! No idea why SP3 wouldn't run but there we go I wanted SP2 anyway as a program I want to run requires it so I'm happy now.

I'm actually writing this from it.. logged in via remote desktop to it as a headless unit!

Anyway thank you all for your help. Just in case any google searchers have the same problem and stumble on this post, I used nLite to allow me to slip stream the SP2 into a folder containing my original XP files. From there it let me create a .iso which could be burnt to a CD. The CD I burnt at the slowest speed - 16x - that i nero would allow and i used the option to check data integrity after burning.

My only regret is that i can't get the 64bit version running as i'd like to do away with the 2038 problem...