It appears that at best, @thejudge has managed to start the Linux distro but then something goes wrong and it doesn't work. There doesn't appear to be any problem booting from the optical media. Perhaps verify the integrity of the created media. Beyond that, maybe try a totally different distro or an older version.

Init Display First is set to PEG: ----> You could experiment (unless you have already done so) and set to PCI.

@ejs also has a good point. The newer Linux Kernels currently do sometimes have some little bugs here and there with some older hardware. You could also try an older version with an older kernel that's still supported and will continue to be until April 2021.

@markuswelby  Mint 19.1 seems to need some different approach, when trying to install WINE .However, WINE has been significantly updated since the original 1.6 which was on the software manager. so it may well be a combination of the two things, that make MINT 19.1 "different"..

@shutter This may work and install. However, according to https://en.wikipedia.org/wiki/Linux_Mint_version_history

Although it could be just the bios is set to Password Check - Setup, instead of Clear.

Lights another candle for @shutter 🙂 hehehe

P.S. I also forget earlier to add, if you hit the ESC key (maybe more than once) on the splash screen,  you will also see how the OS is progressing on loading up. I so wish they did away with splash screens on Linux. It's of no use except to just look pretty and can be hiding important warnings or failures along the way.


For further info: the mobo is a Gigabyte GA-M61PM-S2

A cursory web search suggests that mobo has integrated Nvidia GeForce 6100 graphics; is that correct?

I suggest you take a look at the boot options of the online Linux Mint manual.

In the first instance I'd try booting Mint with the default quiet splash parameters removed; the system should boot with verbose output to the screen without the splash screen getting in the way.

Hopefully, at the point at which the boot process halts, you'll see something on screen to indicate what the problem is.

I suspect @thejudge has probably given up by now. 😀

Here's where I am in this mess now.

First off, the embarrassing bit. yes, it is a 32-bit machine 🙄! I was thrown by the fact that the processor is an x64.

So, I went back to Mint and downloaded a 32-bit version. Further to what @markuswelby said, I went for Mint 18.3 MATE.

Burned the .iso to DVD-R (I've got a nice collection of coasters now), went over to the XP machine, changed the boot order, rebooted and watched.

Automatic boot countdown screen appeared again, then went to the splash screen. Optical drive spinning intermittently. Keyboard appeared to be dead, but then I realised that the 'Esc' key still worked. This is what I saw: 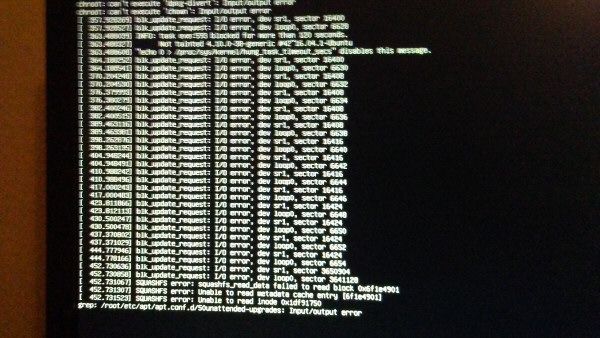 (again, apologies for the poor quality of the images: I can't seem to take a decent picture on this phone)

I let it run for a bit before giving up and hard re-booting. This time I put the disc in the writer drive.

Same sequence as before, except that I pressed the 'Esc' earlier. I saw this: 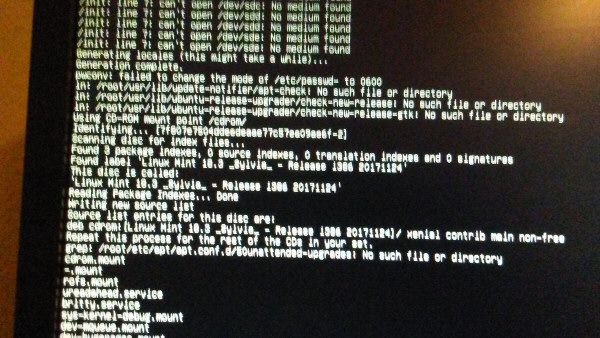 It listed a few more services after this, but then stopped.

I used unetbootin to 'burn' it to the USB pen drive, changed the boot order to put 'USB-HDD' first, then rebooted.

No dice; it stops at the the 'Verifying DMI Pool Data' again. I though this might have been because the CD-ROM drive wasn't in the boot sequence at all, but putting it in at third option didn't change anything.

As @markuswelby suggested, I changed the Init Display First from PEG to PCI. No change. And the only two options for Password are 'Setup' or 'System'. For understandable reasons, I'm extremely reluctant to fiddle with that.

So, where now? I'm going to spend the rest of the evening cleaning the gas cooker; at least I'll get a result from that. ☹️

Check the integrity of the disc that you created. All those I/O errors suggest that the disc cannot be read. If it's not a problem with the disc then it could be that the optical drive in the XP machine is failing.

I'm not really sure why you say it's a 32-bit machine when you've already run a 64-bit distro on it.

To make sure you do not "mess up" your current set up.... why not buy a cheap hard drive... install that, and then you can "play about" with a certain amount of confidence...

there`s quite a lot listed on this page....

Obvously, you will need to buy a size of HDD that will encompass all that you want to put on to the new Linux Mint machine, including windows ... your documents, your photos... your music vids  etc etc..

Once you have got Linux Mint installed on that... then you can go forward, with adding WINE 4.0. (see previous posting)  then follow that with Virtual Box 6.0  ( think that`s updated now... but 6.0 will update in the normal way of things )

You will need to install the extension for Virtual Box 6..0 to get the USB input working.. ( see previous posting )

Then you can install whatever WIndows version you have, on the Virtual Box..   so long as you don`t want to use it LIVE ON LINE, then you would not need to do ANY updates on windows ..

By having a "new" hard drive, at least that should eliminate the possibility that your current hard drive is failing somewhat...

I can't read those screenshots!

But booting from a DVD might check for the presence of disk(s) - but it wouldn't read from them.

The DVD/USB is unbootable/unreadable in which case it will move on to try booting from the HD.

If it's of any interest I use "USB Image writer" to create bootable USB sticks from ISO - its a GUI program that performs a check read after writing to USB. Be careful when you use it that the reported size of output destination matches the approximate size of the USB.

You can install it with

Only works on a Mint PC of course!


Only works on a Mint PC of course!