QUESTION -  Can the slave and master be swapped over? The slave plugged into my LAN then (say) a laptop plugged into the master unit for access?

Yes. I have also used a single wireless unit (half the pair) as a Wireless Access Point by plugging an Ethernet cable between the router and the Ethernet socket.

I have a summerhouse about 50 metres down the garden. The Wifi barely makes it and if it does, the signal will drop completely.

So considering a powerline.

Now the powerline would connect to the modem, through two consumer units to the Summerhouse. So I guess to would definitely not work? If I could connect a wireless extender to a Powerline with a socket output beginning of the feed to the Summerhouse  with output at the end of feed to summerhouse before going into the small consumer unit, would this work or complete overkill? And what are my alternatives?

Bit worried reading the thread about RF emissions as well although maybe only exposed for three hours a week.

Powerline might work - but why does a summerhouse need a separate consumer unit?

The outdoor cable should be a substantial piece of armoured, underground cable - totally different from house wiring...

So it would be trial and error.

If you have access to a suitable route, Gigabit ethernet cable (up to 100m) could be used...

Ethernet cable is shielded, so you won't get killed off by any intense wi-fi rays.

It never ceases to amaze me that people worry about unsubstantiated scare stories about emissions from mains cables etc. but without a second thought are happy holding a mobile phone etc. to their ear.

To quote W Somerset Maugham: Life is short, nature is hostile and man is ridiculous.

Yes. Sorry. Should have opened with the statement "Forgive the stupid question but........"

The feedback I have had would suggest that a Powerline would be problematic (not considering emissions) as it would be going through two RCD's.

So concluding a CAT 5.e or CAT 6 hard wired option and simply connecting up through a open window to a LAN output as and when required.

It was a general observation, not intended to have a  go at you so sorry if it caused offence.

The Ethernet cable is a far better solution, especially considering the two RCDs in the circuit. It's also cheaper.

If you are prepared to do a bit of DIY and terminate the ends of the Ethernet cable then it's not a big deal to install the Ethernet cable permanently. Long masonry drills are available from the likes of Screwfix quite cheaply. Depending on the cable you use you only need a 5/6mm one. I have installed Ethernet around my house and have cables running through cavity walls with no problems. I have terminated these in fixed wall outlets on the inside and it makes a professional job of it.

Leaving an unterminated plug outside when you shut the window is bad news unless there is somewhere clean and dry to store it.

A hard-wired ethernet cable should be permanently connected and installed so that there is no strain on the end-connections.

Get cable suitable for outdoor use - UV resistant etc.


It never ceases to amaze me that people worry about unsubstantiated scare stories about emissions from mains cables etc. but without a second thought are happy holding a mobile phone etc. to their ear..

Scoff all you like at the though of EM Radiation however last year I was a victim of it in a bad way: This is what the side of my face looked like for a number of months: 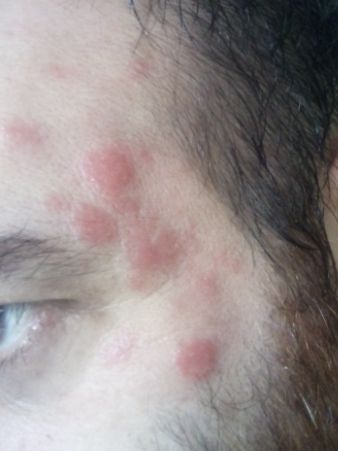 The cause? A 1.5hr whatsapp video call on 4G. From that point on i noticed the side of my face burning substantially with an ice pack eventually being needed that evening. It became so bad that I was unable to go out in sunlight, near light bulbs and was barely able to use a computer - or a mobile phone because LIGHT.... yes LIGHT would trigger a flare up.

Before you dismiss it (as i know some of you will) I was referred by my GP (also a sleptic) to the local dermatologist. I explained it and the first thing she said was "that's the radiation". A biopsy was taken and sent to the hospital lab. The histology report came back saying that I had developed a hypersensitivity after they had exposed the cells to light in the lab and confirmed repeated reactions.

What causes me considerable amusement is parents complaining about cell masts on schools and near their homes, due to radiation from the cell masts. Yet the very same parents allow their kids to make free use of mobile phones - completely failing to grasp that the more masts there are, the less the radiation their kids will be subjected to next to their brains as they use the phones.

So a phone is transmitting at maximum power if it is getting a poor mobile signal - perhaps because the nearest mast is a long way away?

Yes, the more distant the cell, the more power is needed by both ends of the link to sustain the connection. So your battery will use more of its charge in the process.

I am very sorry that you have developed this condition. If you read my post you are in fact confirming my point. It is my argument that rf radiation from cabling is far less intense than you will experience from using a mobile phone.