Every time I go on to Google using a different tablet or computer I get a email warning me that my account has been accessed giving date, time and where it was accessed from.

This is clearly a very useful service but is there some way I can register the devicies I am using so that the warnings would only happen if someone was trying to access my account.

I guess there is a facility to turn these warnings off but prefer to leave them on but not be notified when using a device I am using.

it will only do it the once on a new device, so surely all you need to do to "register" a device is log in to your account on each device.

you could also enable two-step authentication to further secure your account.
Message 2 of 15
(1,377 Views)
Reply
0 Thanks

Thanks for the reply but I have used these devices a number of times but still get these emails which say...' your account was accessed at x time on y device....if this was not you contact......

Like you say in your reply I would have assumed that once you used a device for your account it would automatically be registered.

are you signing back out on these devices?
if you are then that might explain why.

depending on how you are signing in, i believe sometimes you get a "is this a trusted device" tick box.
Message 4 of 15
(1,352 Views)
Reply
1 Thank
1 user liked/thanked this post: gleneagles.

I used to have something similar when signing into youtube to manage one of my accounts using Private Browsing, google would send me emails and text messages saying there was a sign-in on a "new device" (despite it being the same laptop), got annoying to be honest, but one day it just stopped, can't recall if I changed something in the notification settings or their servers just got used to it...

I guess it's cookie related, dropping a cookie into the browser's files to say "this is a trusted browser on a known device" sort of thing...

Will have another look through my google account to see if I can spot anything.

Thanks again for the replies

I have several accounts and I had the same problem on all of them a few months back.

My connections had been up a few months and it was when it dropped and reconnected that I had the problem.

Passwords were rejected in mailwasher outlook etc. and I had to manually login to each account on the google web page where it said something like unrecognised machine blah blah. I had to tick a box to say yes it's me.

I put it down to the connection ip whatever. A few accounts did have another grumble but the problem did fade away.

It was just a damn nuisance having to do it for no real good reason other than some mindless machine thinking there had been unauthorised access to my accounts.


It was just a damn nuisance having to do it for no real good reason other than some mindless machine thinking there had been unauthorised access to my accounts.

better safe than sorry though.
I'm sure you'd be complaining if someone did access your account and google never advised you.

But as it wasn't it's natural to have a good moan.

Why not set up a filter that auto-sends messages like this to the deleted messages bin?

Mailwasher already sees to that.

The point is initially I had to access the accounts via the web page to tell them yes it is me to get access.

I'm going to assume that this was probably due to those dodgy ip's plusnet bought.

I get the same problem every time I have a look at my mail from a VM.

Just out of interest this was the email waiting for me when I logged onto the googlemail web page. I nearly hit the panic button before, looking at the ip etc, I realised I was the "someone". Still as I said it was a damn nuisance to login and fiddle with twenty or so accounts. Some I had to go back over as I never initially noticed the "yes this is me" tick box. 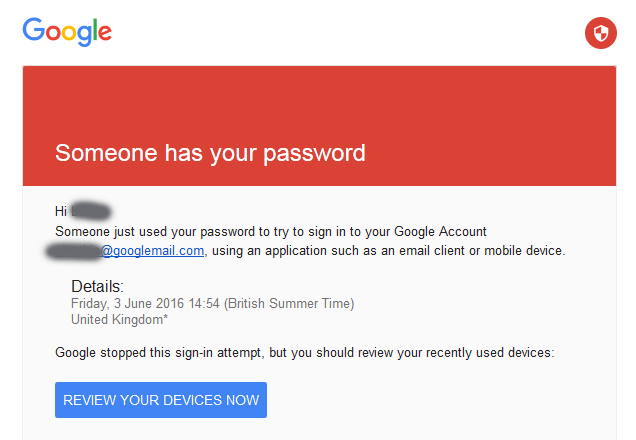 Nah that's one from a few months back. Only accessible on the web page.