A few days back @HairyMcbiker recommended me an android task manager. Although my problem turned out to be related to the downloader data cache I installed it anyway.

What I've noticed though is that it reports a different amount of available ram than android itself does: 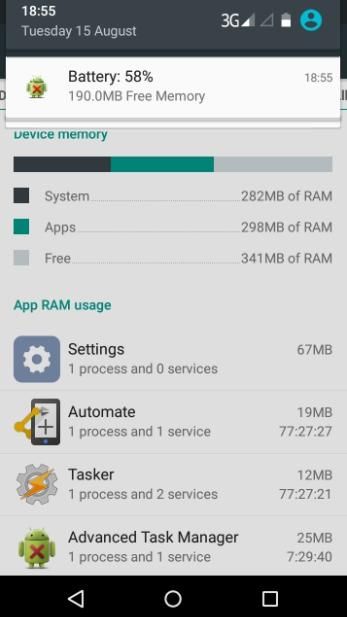 Now thats just not confusing at all is it. Any ideas whats going on here and what i should believe?

Not sure whats going on with the memory but you haven't got much, must be an old phone

Did see you've got automate and tasker installed, I switched over to automate from Tasker and haven't looked back, great app!  Only downside is if you build some more complicated flows it gets rather complicated/messy working out where everything is!

Well its got 1GB of ram - thats more than enough for my needs (you can run WinXP on that!). I was getting pretty frustrated with it when the downloader data cache kept causing it to crash apps and the browser but since discovering that and wiping the cache all has been good. For my needs it does all i need from it.

Tasker and Automate are two brilliant apps and yes I'm aware i'm running both lol. When i first got automate it had a bug where it wouldn't send SMS's on some phones - mine included and it took months for the author to finally crack the bug. It's a great app but i do find a few bugs here and there.

Tasker I also bought based purely on its reviews. It's slightly more complex (aka PITA) to use and cancelling out / backwards from some things is a bit weird but its robust. I ended up creating a flow in automate to save SMS's to a file which Tasker would then check every 15 seconds and send out. I've also got Tasker setup so that if my phone volume is low and another mobile number rings me, it will reply with a text containing instructions on how the caller can turn up my ringer volume. It gives them two minutes to do this (2:30 in reality to account for sms lag) and then rejects any attempt to turn up the volume (it also turns it back down once the incoming call has happened). I also have a lost / gps thing setup with Tasker. I could have done all of these with automate but as the sms bug it previous had has made me a bit cautious of using SMS's i do any SMS related stuff with Tasker.

Something else i like about them both is that Tasker also lets you create and export your own apps via the app factory which is kinda groovy yet Automate on the other hand allows you to create desktop shortcuts / toggles for your flows.

In short they both have pros and cons but they also compliment each other rather well when you script it right.