A couple of techy problems

A couple of techy problems

Following on from my sojurn withe Firefox updates on Mint 15... which eventually was resolved by Foxy suggesting a "get-apt" command... and also installing Mint 18.1 .

Great grand daughter downloaded "something" and it "stopped working".. so I offered to "have a look at it".. and try to get it working again...   couldn`t find what was wrong with it, after trying many things.. so decided that I would try and see if I could get it to run VISTA ( which I still have the CD for,...  )  and proceeded to install it... it worked... to a point..

two things came to notice, ... firstly.... there seeme to be no "sound" output... the speaker icon on the bottom task bar, had a big red X over it.. and when hovering, it announced that there was no sound hardware .

So I went into the Diagnostics,... and sure enough, it passed the sound test !.. and I could hear sound from the speakers and from the phones. in "left" and "right" applications..   So I tried to play a music video... it started to play for about 5 seconds, and then disappeared.

ok.. now another problem arises.... WIFI... it was connected by the cable to the router...  so I try the wifi connection... it shows all the neighbours  SKY and VM signals..  but it doesn`t show my own router... which is about 3 feet away from the laptop...and the router is in communication with this laptop sitting alongside the Dell on the same desk !.

I was now looking to see if the sound was working... and lo and behold... play a music video.. and we have sound in speakers and phones... !.. yet windows said there was no sound hardware ! ! !..

Wifi has always been a bit "iffy" on Linux, for me... as many know from previous threads.. so I was expecting trouble trying to get it to work on this old Dell.. and sure enough.. no matter what I tried, I could not get it to show any wifi activity at all...

I used NDISWRAPPER and B43-fwcutter on the Mint application..   ( I even changed the HDD and installed a new version of Mint 18.1 on it... to see if that would help.. but no..

So.. can anyone point me in the direction of...

A... solving the Vista sound problem

B.. . solving the Vista WIFI problem

Surprised to see you used I used NDISWRAPPER and B43-fwcutter !!! - I've never tried ndiswrapper but I believe it's seriously hard work.

You can identify your wifi chipset with the following command

But this shouldn't be necessary as Mint 18 has an option for this - it takes a couple of minutes to run.

Select Administrator -> Driver Manager and you should eventual get something like this:- 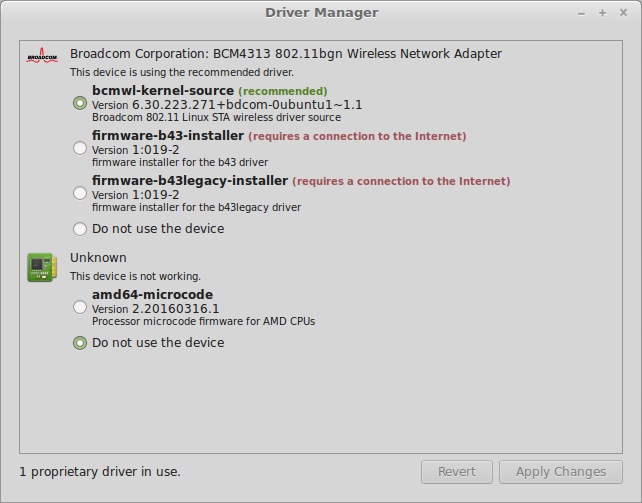 @VileReynard  Thanks for that..Well, I say i "used" it... but in effect.. I was just following some on line suggestions as to what to do, and was trying anything that seemed like it may work..

As for the "Driver Manager"... I did manage to get that page up... but it did not show any wifi driver, as it did on earlier occasions.. it did show some obscure driver, that was not related to wifi...

At the moment,.... the laptop is languishing in a dark cupboard, and in disgrace with me...so it will stay there for a couple of days/weeks until I get terribly bored, and decide to have another go...

What I could not understand, was how the SOUND worked on Linux,... and Windows said there was no sound hardware...    also... could not understand why the WIFI found the neighbours wifi  ( about 6 of them ).from SKY and Virgin Media... but could not find/see/show mine...  in effect... ( apart from it being secured ).. I should have been able to connect to the neighbours in Windows... !     ( no not by looking through their windows ! ! )..

Do you have your wifi set to channel 13?

In some countries, such as USA, this doesn't exist; so a change to channel 12 might fix it.

@VileReynard   No, I am on channel 12 at the moment.... ( and have been for a while.... ).. strangely, although it did not show my connection on the "networks are available" on Windows... the laptop has been registered by the router as being part of the "home network"..  !...

Incidentally,  I can`t find how to change the channel on my Thomson TGN582n router... although I have done it before....!

In the USA channel 12 doesn't work either!

Coincidentally I was on the webpage @VileReynard mentioned earlier trying to figure out why my TV couldn't see the 5GHz channel my router was broadcasting on. (ch36 worked, ch100 didn't)
Live router stats
Message 6 of 17
(1,142 Views)
Reply
0 Thanks

Wireless devices need to know that they are in the UK rather than the USA or they will ignore channels 12 & 13.  In Windows you can usually change the locale setting in Device Manager

Older computers have difficulty recognising what sound device they have and that makes it easy to install the wrong driver.  See if Linux will tell you what sound device it thinks you have then find the Windows driver for that device.

Vista has just 'expired' and was always prone to long irritating delays; it's cruel to land somebody with a Vista computer if it can be avoided.

@ReedRichards  Thanks for your input... not sure how to find out what sound device is on Linux... but would have thought that the Dell site, using the TAG number, would produce the correct driver. (I think there are three or four, depending on the device ).. If I downloaded and installed them all, the computer should pick the correct one. ? ? ?

As for the WIFI..   as mentioned... when it was first fired up, on the XP ... it appears that it registered with my router and is listed as part of my "home network"  on the router page.. but for some reason, although it sees the neighbours wifi`s.. it doesn`t see mine ! !

. If it appeared on the router on XP, then one would assume that CH 12 is OK for it to work....  ( I never really tried it or considered it when I originally booted up to find out what was wrong with the computer).. (will check out the Device manager point about uk or usa..location )...

Regarding the Channel Change on the router.... have done that.... now on Ch 6 ( couple of other weak stations on there).. ready for the next session with the Old Laptop....

Since it is a Dell, did you check the Dell web site for a LINUX wifi driver?
They are quite good at Linux drivers unlike some manufacturers.

Microsoft broke every Vista computer I have seen about half way through last year.  They now use an entire processor core searching in vain for Windows Updates so the performance is degraded.  I don't know what happens with a new Vista install.  Vista also sometimes takes AN AGE to shut down which is massively annoying if you are trying to restart the computer as part of some service operation.  I have timed the wait as over 10 minutes on occasion.

You need to install the sound driver that matches your hardware and no other.  Often the same computer model can have a variety of different hardware configurations so this can be problematic.  Maybe one of the Linux fanboys can tell you what their equivalent of Device Manager in Windows is?

In Mint, open the Menu, type in hard
you should see System Profiler in the list. Click on it. That will give you as much info as you want about your pc.
Message 12 of 17
(1,069 Views)
Reply
0 Thanks

A useful Linux utility to install is inxi, to install

It has many options, but inxi -Axx should reveal things,

Thanks for all the updates and advice, guys.... given me some impetus to get the thing out of the cupboard and give it another bashing....got nowt else to do today.. and it`s looking a bit grim outside !..

OK  just got it out of the cupboard... plugged it in...booted up... and... WIFI connected.... so it most probably was that Channel 12 that caused the problem there....

still showing a big x over the speaker... so am going to plug in the Linux hdd... and see how that performs..

So it looks like window Vista is messing things up.saying there is no sound hardware.

running a music video on the Mint 18 ... using the default player.. no sound and video appears frozen.

however, if i "open with" and use VLC media player , the video is "jerky" and blocky . the audio is excellent quality though !...  so will download a new set of Dell Drivers...