I can confirm that many other people have reported the same problem and after investigating this it appears that the Infra Red signal is being absorbed by a surrounding device (such as your TV).

To check if this is the case please turn your box away from the Infra Red signal receiver of any other device and check to see if your box will then pick up a remote action. If this does work then the issue unfortunately will happen with any other box that is sent out.

So now I have to fit a tempest jacket around my YouView box?

- are you guys for real?

When I get close to the box (and I mean real close), the reception is marginally better but it still requires multiple key-presses to execute a command. I have had this TV for years (it's a Panasonic Viera plasma P46G20B). Worked perfectly well with a BT YV box (until it became too - ahem - 'expensive' to run) so I moved to PN a few months ago and the box has worked fine until recently but the remote signal has degraded to the point that its is now barely usable. To help you understand quite how unusable: last night I had to log in to an OD service and to enter my username and password took 251 key presses (yes - I actually counted them)!

As I have said, this problem also affects the spare YV remote I have from my old BT box. The remote was paired with the TV (I have since unpaired it in case that was the cause - it wasn't) so you can see why I am unconvinced by suggestions that this is down to EM radiation or some kind of IR crossover problem.

It could, of course, be an alien invasion from outer space which is interfering with YouView remote commanders as part of some dastardly plot for World domination or state-sponsored cyber-terrorism by a hostile nation - both probably more likely than some of the other theories you've posited so far.

I look forward to future suggestions.

Are we in China? Are we being censored? What's just happened?

So I was viewing via here - recent posts page and saw a reply from Andy, it was there at the top of the page.

My phone pinged too to alert me to it too. 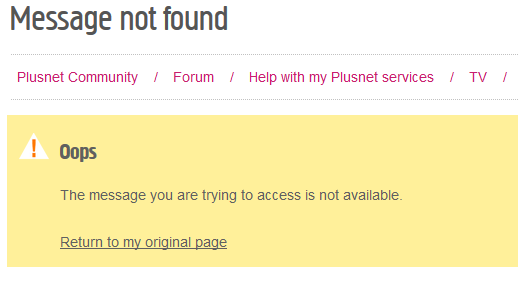 (if spam caught it first, then surely I'd not see it before it went awol)

As this might be down to an alien invasion, going offline to have a check at this end......

Are we in China? Are we being censored? What's just happened?

So I was viewing via here -recent posts pageandsaw a replyfrom Andy, it was there at the top of the page.

My phone pinged too to alert me to it too.

Whoops did someone at PN Towers have a sense of humour by-pass?

Perhaps it was the mention of tempest jackets that did it

The short version was - putting the remote close to the box doesn't really fix it and I think the suggestion this problem could be related to EM radiation or some kind of IR crossover is slightly over-played.

Clearly my attempt at humour and irony didn't play too well...

So the 'new router' I was notified about turned out to be a new remote and it's a different design to the old one- maybe they have upgraded it it. So far, in initial, use it's better; the response is still a little laggy but that's been an issue with YouView boxes and their EPGs since time immemorial so my assessment is that, for now at least it appears to have resolved the problem.

So we'll see how this one fares and I'll close this thread. Thanks to all those that contributed for your suggestions and moral support - much appreciated as always.

As the saying goes, if it ain't broke then don't fix it..... maybe it does have upgraded internals....?

Time will tell I guess.