I'm getting multiple drops in connection via WiFi.  Event logs show multiple "Wifi Registration Failed".  It's just dropped my smart tv connection 3 times in 30 mins or so.  This kind of problem has existed for ages (months/years) - finally hit a wall of not being able to take it any longer!

Sorry to hear that you're experiencing wifi connection issues - your connection looks good from this side, so likely a wifi issue as you've surmised.

I'm sure that my colleague @bobpullen will be able to assist with your firmware update - in the interim, take a look at the info here and get your wifi frequencies split to see if this helps.

Thanks @RandallFlagg.  I've already got the frequencies split, but I double checked anyway.   Should I expect @bobpullen to be in touch?

Yes - he's on the forums regularly.

If he hasn't responded by this time tomorrow, I'll raise this directly with the products team via a different route.

Moderators Note
This topic has been moved from Fibre Broadband to My Router.
Windows 10 Firefox 107.0 (64-bit)
To argue with someone who has renounced the use of reason is like administering medicine to the dead - Thomas Paine
Message 5 of 14
(4,552 Views)
0 Thanks

Just a quick confirmation that I've raised this directly with our products team for you - we'd expect the update to be pushed over the next 2/3 working days.

@thetomevans, your router has dropped off our hardware management platform for some reason. If you factory reset the device by inserting something into the pinhole at the back until the status light flashes green then you should see the latest firmware pushed to the device within a day or two.

Haven't noticed my TV dropping connection to WiFi since, but the same problem has continued to exist with a Nest Cam.  It repeatedly loses connection.

And from the logs, this one device did this for about 25/30 mins in total.  Any other ideas what might be going on please?

Just a bit more event log info if useful.  My Nest Cam said the connection was lost at 18:44.  These are some other logs around the same time:

Connection still looks good from this side.

Could you confirm that you've split out the wifi frequencies as per our previous correspondence and that you've assigned the nestcam to the 5ghz frequency as a dedicated connection?

But literally whilst I was typing this the TV dropped connection whilst we're streaming on BBC iPlayer.

Contrary to the advice given thus far.....

You may wish to try the Nest* and the TV on 2.4GHz, then see how it goes. No promises but I have kinda proven something with the 5GHz and my phone also connecting to the 5GHz only .... the 5GHz wifi range is poor, worse than I first thought

I'm getting these events for my phone and this is the only device on my home network using the 5GHz. 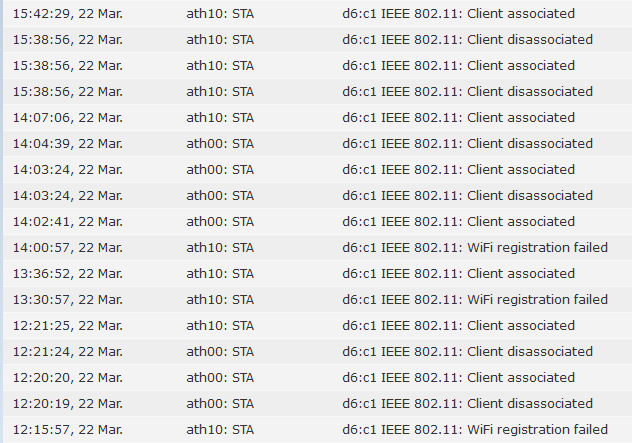 I actually caused these events to occur and (thus far for me anyway) it's also repeatable on the 2.4GHz too! The 2.4GHz is better range wise anyway, hence my suggestion of moving yours to 2.4GHz. Hopefully you'll see an improvement?

The cause of the events, for me anyway, is by moving my phone more than 6 metres from the routers location. Yes, only 6 metres :(.

Your TV for example is highlighting a 'range issue' as it's only connecting at 105.6Mbps. Don't confuse the connection speed to the router and the speed of you device to the www. My phone, during this reply, is connecting at 433Mbps to my router and being as it's not moved more than 3 metres from where the hub is, the failed/disassociated/associated events have stopped for this phone.

*if the nest works, it might be a good idea to move the device you're using to view it also to 2.4GHz as I've personally witnessed poor interaction when each device is on different spectrums. Your iMac is probably on 5GHz too?

The other issue, imho, appears to be related to the hub caching devices, which eventually kicks them off the router intermittently. A 'workaround' seems to be by turning the router off at the mains, but doing this too many times isn't good for your connection.

So, try 2.4GHz first, if it cure your issues then great, if it continues then at least 1) you can say you've tried both and 2) ignoring a firmware hiccup, if a power off and on cures this then it does kinda sound like a caching issue...

Thanks DS, The cam and the tv were both on 2.4ghz before, and it has always been a problem on that.  The range problem is interesting, the TV is probably 4/5 metres away, but with a wall between rooms.  The nest cam is in the same room as the TV... but a metre or so closer to the router.  I would have thought the wifi should be able to cope with that sort of distance, but perhaps not!

Tweaked my post to remove ip's and other stuff, never thought of that, cheers!

I'm basically a day or two away from just buying a better wireless router or a mesh system....

On my previous router, which is actually within 2 feet of the TV, I initially set it on 5GHz and even then it was dropping!!

Since then, although I could use ethernet, I've used 2.4GHz with better success....

Then came the latest firmware...... oh dear ...... there's a few of us having issues. Here's just one (not mine) and it's looking like there's a bigger problem with this firmware.

Then came a replacement hub (yesterday) running 259 and so far (on 2.4GHz) all's well. I'm expecting mine to go wrong once the firmware updates.

I've also been giving another router a thought. We shouldn't have to, but needs must!!