I have been with Plusnet (PN) since Feb 2021 and it is terrible compared to talktalk and there super router.

I suspected it was the router, and the Openreach engineer said it was probably as the line was showing no faults.

A replacement router from PN did nothing to change the situation.

I looked online and read stuff and then found a youtube video showing that i could use a BT router, and I had a BT Hub 4 whichI I set up yesterday.

However, after being good last night and me being able to log on to a work website straight away instead of tethering to my mobile phone, today it has been slow at times to open a page. Sometimes taking up to 20 seconds to open it. But, then a few minutes later it is back to a fairly quick 2 seconds again for the same page.

Is it true that I could have messed up the transfer of the routers last night?

I put the ADSL grey cable in straight away with the ethernet cable and the power cable. Should I have waited for a prompt after entering my plusnet username and password (which were both correct last night and now).

I reset the router last night having forgotten to the first time and after I did the process again all was good last night.

If it isn't me putting the ADSL grey cable in too early, could it be that the speeds are varying because a lot of people in my apartment building are working from home in the day time?

Thanks for reading and any help would be greatly appreciated.

Could well be contention/overload on the line. However your BT HH4 is even older than PN's Hub One, which is just a rebadged HH5 in a fancy if garish frock. You might consider buying a HH6 from the auction sites, it's far better than the Hub One and there's an excellent setup guide on this forum. Mine cost me £15 and it's a much better router, wifi is easily 20% better and no dropouts or snags (so far!🙂)

Hello Longliner,
I hope you are well.
Thanks for your reply.
I will look at getting a hub 6, but I wanted to ask you if using 5ghz is better or not?

I suspect it isn't because the wired connection also slows down when the 20 second page loading starts.

Btw, my issue is not resolved as I pressed that button in error, so any further input from anyone would be welcome.

Assuming you're within range, 5GHz is far superior to 2.4GHz. What's been stated is accurate. A BT HH4 is inferior to a Plusnet Hub One in terms of capability.

If you can get the Hub One back on the line then I can ensure it's running a firmware version that's void of any significant Wi-Fi issues (which it may not have been when you last had it connected). There's also some improvements to be lent to the wired connection.

Thanks Bob, I will put the PN router back on and then I will ask you what I need to do regarding getting the current firmware mate.
Thanks.
Message 6 of 37
(379 Views)
Reply
0 Thanks

After some looking into it, I now know that the sagemcom is not the model number for the hub 1.

I rang them to complain about this and the lady was very nice and stated I should not have been sent the sagemcom and definitely not twice.

She ordered me a new one and hopefully I should get it by Friday.

Is the sagemcom known for being a very bad router or could still have the same issues with the hub one?

Thanks in advance for any help anyone can offer.
Message 8 of 37
(336 Views)
Reply
0 Thanks

Hiya @SS41, I am sorry for the issues that you are having with your service.

I can see you previously had our Hub Zero router, this is older than the Hub One and was for our ADSL customers. The Hub One is a newer model that is VDSL compatible and dual band.

It look like you also have an ongoing phone fault open, I have added the latest update on the open ticket for you here: https://www.plus.net/wizard/?p=view_question&id=217861796

Hi Bobpullen,
My pn hub one has arrived.

Any help you or anyone else can provide me with the firmware would be much appreciated as we are having problems.
Thanks in advance.
Message 10 of 37
(285 Views)
Reply
0 Thanks

@SS41 Have you installed the Hub1? What F/W version is it? What are the problems?

Thanks for replying Jab1.
I don't know what firmware my pn hub one has. If you could please let me know how to find I can get it and let you know.

The problems are people cannot hear me on zoom calls as my voice keeps breaking up and my emails are hanging and being sent because the internet keeps disconnecting.

The problems are on wifi and wired.

Your F/W version and some other useful information is accessed via the Help Desk tab under the 'Troubleshooting' one as shown in the picture below. If you could take a screenshot of that and post it - after removing any personal information, it may point to what is wrong. As an aside, what 'username is shown on that tab? 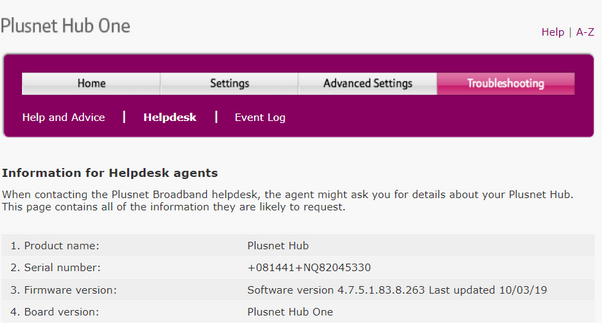 That can be updated - the best way is to post a  request in this topic: https://community.plus.net/t5/My-Router/Hub-One-5GHz-WiFi-issue/td-p/1696363 - although it may not solve your issues, as it was created to solve a specific (other) one.

The requested screenshot would possibly be of help, BTW.