It’s over two years since I first wrote of how to set up a Smarthub for use on a Plusnet service, see https://community.plus.net/t5/My-Router/Using-the-BT-Smarthub-6-on-a-Plusnet-Account/m-p/1587673#M85.... Since then, there have been changes in the firmware and feedback from those who have adopted these hubs has led to further understanding. This post has therefore been produced as an update, maybe the Mods will think it suitable for pinning with the original?

The original instructions still work fine but the following should be noted:

Thanks Baldrick1 for your advice and the steps to go through. Im going to get a hub 6 for the same issues with the rubbish plusnet router. Do you have to when setting up.....
"Go to ‘Advanced Wireless’ in the ‘Advanced settings’. In the field above the 5GHz band column labelled ‘Separate Bands’ set this to ‘ON’. Note that this should automatically add ‘-5’ to the ‘Network Name’. If not add it manually. You will now have two independent channels, use the best."?
If I do, will this give 2 wifi channels to log into and which would be the best?

No, you don’t need to separate the bands if you would rather leave them synchronised. I include this as some devices have problems with them in sync. It is suspected that the cause is that some devices flip flops between the two and either won’t connect or have drop outs.

If you separate them you will find that if you go to your device available network settings you have two SSIDs, both have the same password. Which is best depends on several factors but the general rule is that 2.4 GHz works at a greater distance than 5GHz whilst at short ranges the 5GHz channel is faster. It’s a case of trying both and using the best.

This is one of the most useful posts I have seen on any forum. Thanks again for sharing the results of what must have been a great deal of hard work!

I've just acquired a Hub6/Smarthub from eBay. No packaging or docs so don't know anything about it aside from these posts thanks.

The network name was originally set as BTHub6-**** which I changed to be the same as my old PlusNet one. However as soon as I changed the network name for the 2.4GHz band, the 5GHz band immediately changed to -5. I could insert the PlusNet name in front of the -5 which gives me split bands but I can't remove the -5.

I don't really want this. Having the same name for both bands has never been an issue and it's a bit of an unnecessary pain having to choose between them. However there is no option available to combine or split the bands, simply changing the original BT network name causes the 5Gz name to change to -5. It's odd because after a full reset both bands DO have the same BT network name.

Anyone else seen this problem or better still found a way round it?

Aside from that it works really well, noticeably faster and trivial to set up following @Baldrick1 instructions.

Should have done a bit more researching first. Seems it's a known issue but here is a solution:

I can confirm it works OK but it takes a few goes to get the timing right.

I still don't know why I don't have the option NOT to split the bands but this works for me anyway. 😀

But you do have the option to leave the bands synchronised. All you have to do is go into the advanced wireless settings, select the 5GHz tab and change ‘Separate Bands’ to OFF.

I recommend separating them as some devices don’t work when they are in sync.

My reading of your linked post is that it is from someone who wanted to use different SSIDs for the two bands without having -5 automatically added to the end of the 5GHz band.

As I said though, there isn’t that option or I’d have chosen it! However giving the 2 bands either the same or different names achieves that of course, however there is no explicit option on my advanced wireless page. After a factory reset both bands have the same name but as I described, any attempt to edit causes the router to try to enforce a -5 suffix.

I’m aware of the potential problems with not separating the bands, however none of my devices gives any trouble and it’s more convenient (non-tecchy wife!) to only have 1 SSID.

Perhaps I’m due an update, we’ll see. Thanks for your howto posts!

I apologise for sounding sceptical but this is the first time that I have heard of this. If you factory reset the hub before you set it up I would have expected the two bands to have been synchronised by default. Did you go through this step?

These are the two alternatives that I get with my hub. The first shows them as independant bands, the second shows the two bands as both switched on and synchronised.

I assume but haven't tried that selecting 'Reset to recommended' will in fact synchronise them.

Can you help by posting a screenshot of your advanced wireless page? 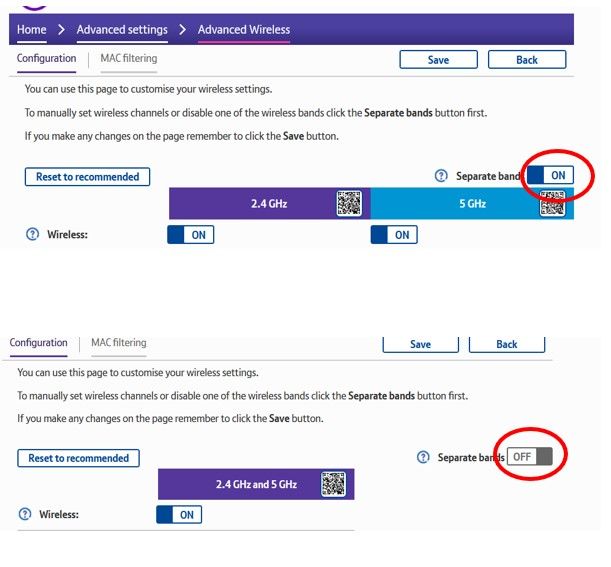 Despite your scepticism I don't have the option. My advanced wireless page looks like this: 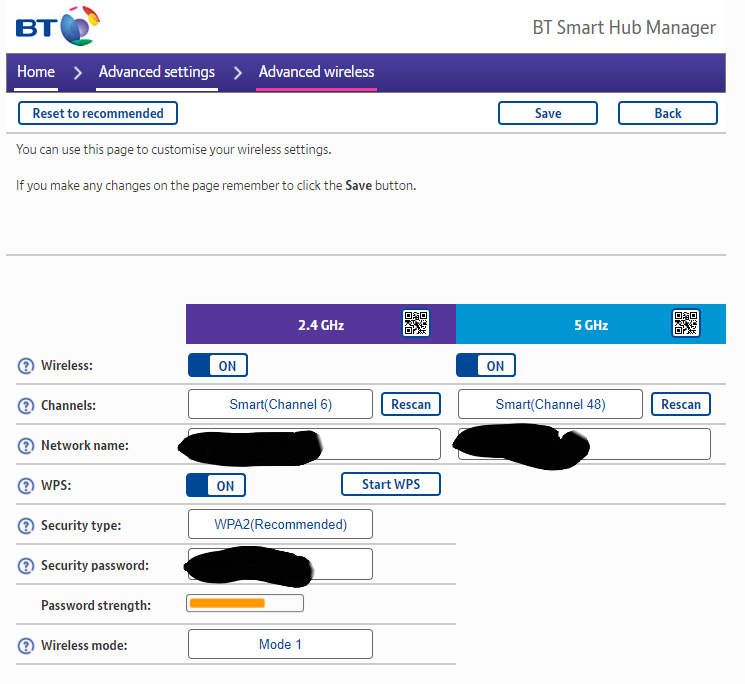 As you can see, the 2nd line of text on your page is absent from mine. As a by-the-way I also don't have the 'Configuration / MAC Filtering' options that you do, and my page layout is subtly different but maybe yours is the business or FTTP version? Just for completeness, the 'Reset to recommended' option does not cover splitting/combining (but nevertheless I did try it - it didn't!): 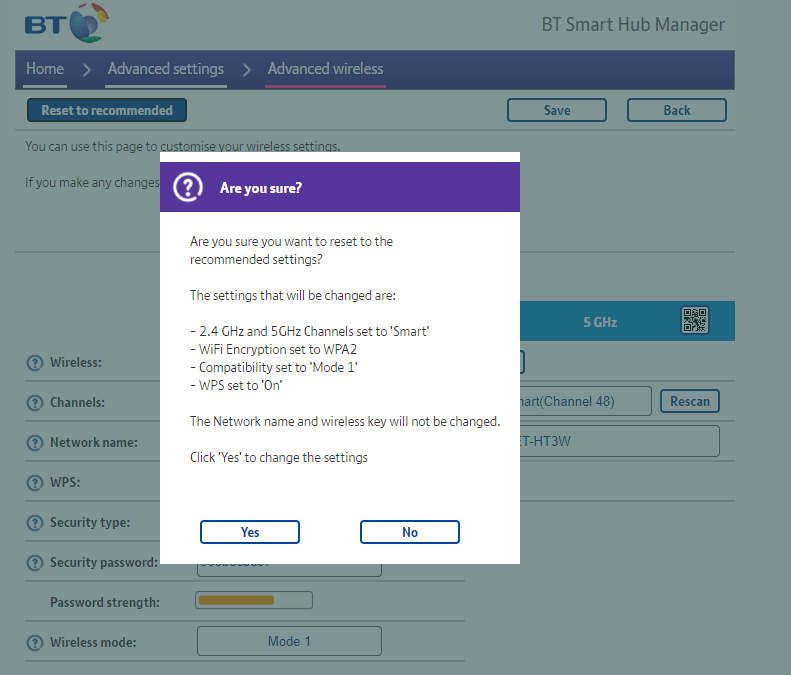 So no obvious way to select combine or split apart from how I define the SSID. After a factory reset both bands have the same BT name but it still isn't displayed as per your second screenshot with a single heading labelled '2.4GHz and 5GHz'. So as delivered the bands are not combined per se but they are given the same SSID which is what I've done. Works OK like that so no problem, just different. Maybe I am due a software update sometime.

A newbie here. We've been using John Lewis fibre 68mbps for the past few months but the wifi has been hit and miss, now getting worse with no help from customer service who just say Wifi isn't there problem even when we are getting 6MBPS while standing next to the router!
I want to try configuring BT Smart Hub 2 but wanted to check the above helpful instructions would work on JL before I make a complete mess of everything. Do I just need to amend the email address to the JL suffix or is there more to do please? Also, I can see steps 11 onwards but the link for the previous steps seem to be for an older BT router but I guess the steps are the same for Smart Hub 2? Thanks so much for any help.

@Prodigy11UK  Welcome to the Plusnet forum.

The setting procedure for the Smarthub and Smarthub 2 are the same. It should work fine on a JL connetion. See here for the format,  https://www.johnlewisbroadband.com/support/customer-service/server-addresses.html  I don't know if it's the same as your JL email address, the appendix to the username (the bit after the full stop) is different for Plusnet users so you will need to check that out.

Thanks @Baldrick1 ! Sorry I thought the first 10 steps were for some kind of business internet modem, will have a go tomorrow. Thanks again and reminds me that I haven't watched Black Adder for a long time so will also look for that on iPlayer - after internet is fixed!