I've been a Plusnet customer for about 28 months now, maybe more and I'm still on the original fibre setup that Plusnet/BT left me with, its a horrendous mess of wires and outdated equipment as follows

Obviously this is two large router/modems on the wall, tons of cable etc (see images)

What I want to know, is can I shrink this down to a single fibre router? and if so any recommendations on one? It's only a small flat so WiFi isn't too important, just a solid reliable router.

Thanks for you help/advce everyone. 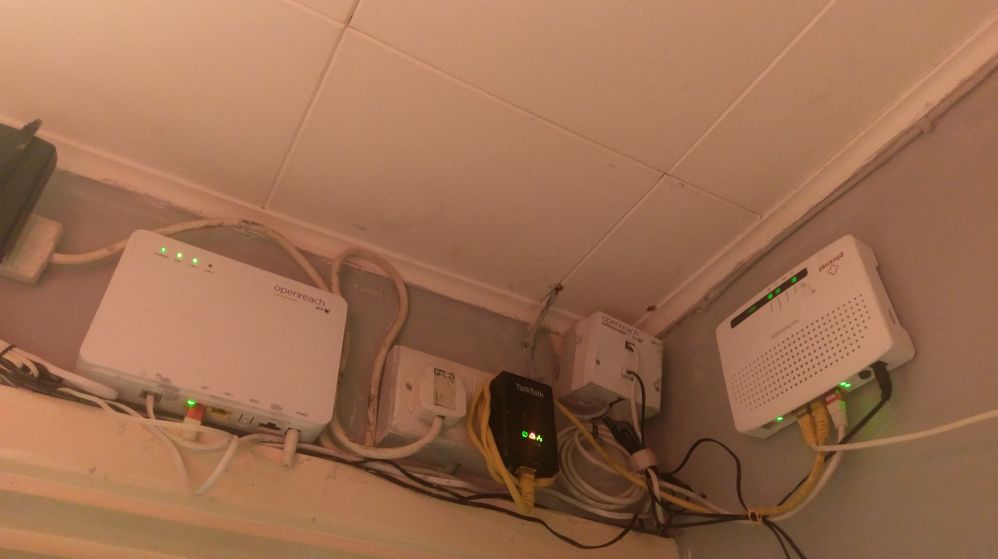 Setup above the door 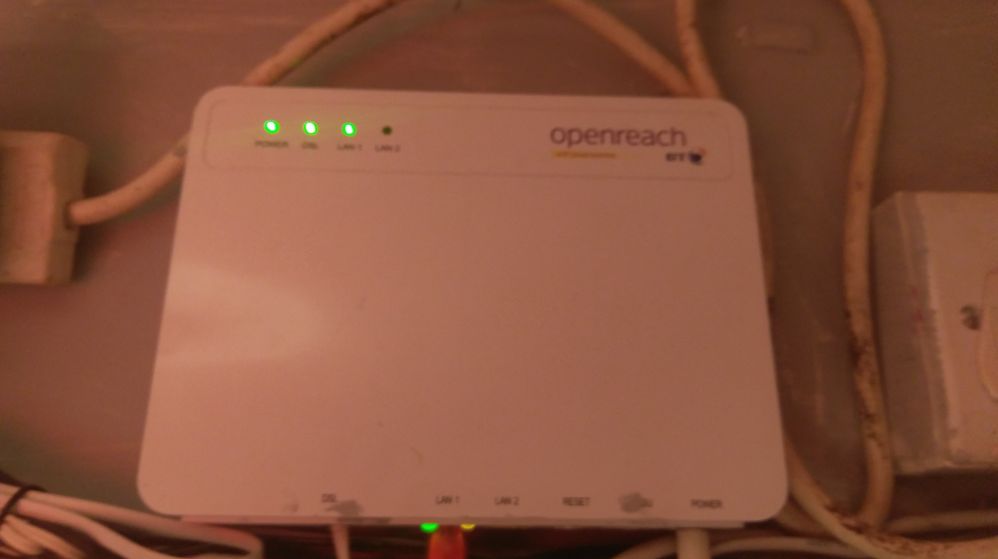 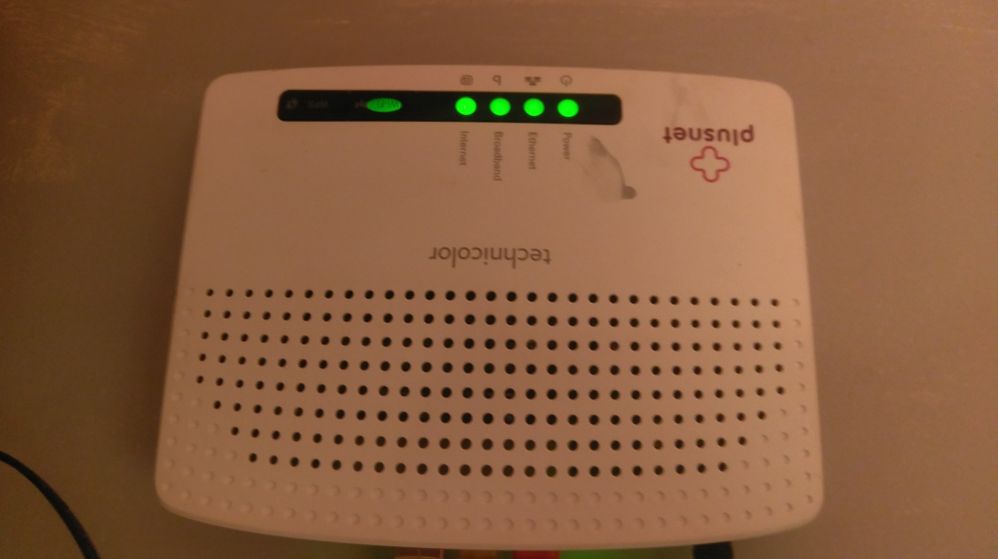 There's a good collection of fibre modems/routers on the Kitz site here.

Also why not ask the customer options team at Plusnet as they will probably give you a Hub One if you sign a new contract.

Thank's for the link, so the fact they are combined modems means I can replace both boxes with just the one router? I was toying with signing a new contract but atm I'm having some speed issues with Plusnet that tech support are refusing to acknowledge even exist, but hey, long story!

I concur with Browni's advice.

@vapourmike wrote:
so the fact they are combined modems means I can replace both boxes with just the one router?

If it's a VDSL2 modem router, that should replace both the Openreach and Plusnet boxes you have.

@vapourmike wrote:
I'm having some speed issues with Plusnet that tech support are refusing to acknowledge even exist, but hey, long story!

Sorry to hear you're having speed issues. The Openreach modem is in sync slightly below your estimates.

We'd be happy to arrange another engineer to investigate that but as the speed is marginally below the estimates, there's a possibility they might not find anything wrong. It's also a possibility the Openreach modem itself is causing the issue.

What sort of speeds are you getting over a wired connection?

This is a bit out of date but it gives a good idea of what to look for. From your pictures one thing would be "can it be wall mounted" Another is "is it future proofed" - in as much as it can be.

By speed issues I mean since I've had the connection its continously got slower and slower. When I first had fibre I was well over 60mb all the time, it then dropped down tot he 50's which was bearable. I was then away for 15-16 months (partner at the address) and the fibre was running in the 30's and then we had 5 days downtime. A BT openreach engineer came and ran a new line from master socket to the pole and even now I'm on the lowest speeds I've ever hit (46mbps, even though it speed tests at 37 ish). I've checked the BT line checker and it was 49-66 as estimate, so why with a brand new line is my sync speed still below the estimated? when I KNOW it used to be capable of so much more? (60+)

I've been given a Plusnet Hub One so will get that plugged in this weekend and see where it goes from there.

A line can sync at a slow speed for various reasons. Unfortunately, testing the line hasn't identified a reason.

If you still have speed issues with your new router, I'd advise running a BT speedtest at http://www.speedtest.btwholesale.com, completing the further diagnostics. This will store the result on the supplier system. And let us know once you've done that.

As capacity is utilized at the cabinet speeds can be reduced for the early users as interference grows.

When you have the new router try a wired speed test from the test socket behind the master socket faceplate just to rule out any internal wiring issues.

I assume the powerline adaptor is for the TV boxes and you are speed testing on the desktop PC on a cabled connection.

At the very least one less box will tidy things up a bit.

You seem to have a filtered plate on the master socket so I would expect any internal phone wiring to be isolated from the line but a test socket speed test is worth a try.

Just an update, the Plusnet Hub One has turned up and I've installed that, and speeds have greatly improved, speed testing at 52mb+ now and everything has got snappy and quick again!

1. There is no internal wiring at all, only the single phone and router equipment into the double socket
2. PC is via the white RJ45 cable, the powerline is purely for the Plusnet Youview box (both speed test the same anyway)

But regardless, the speed is good enough that I'm happy now

Just shows how old equipment can really cause havoc! All I've got to do now is another tidy up and  decorate, got the paint and filler to hand! haha. 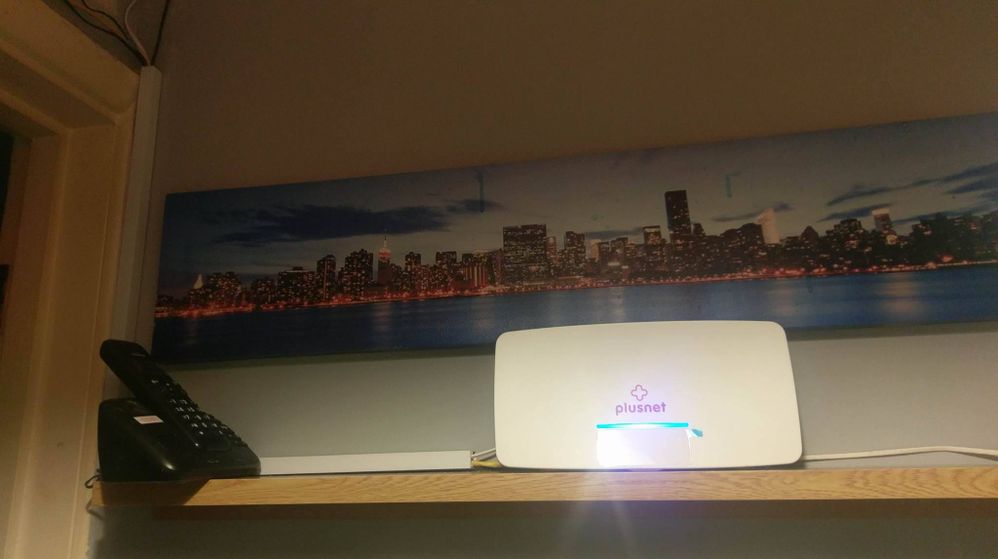 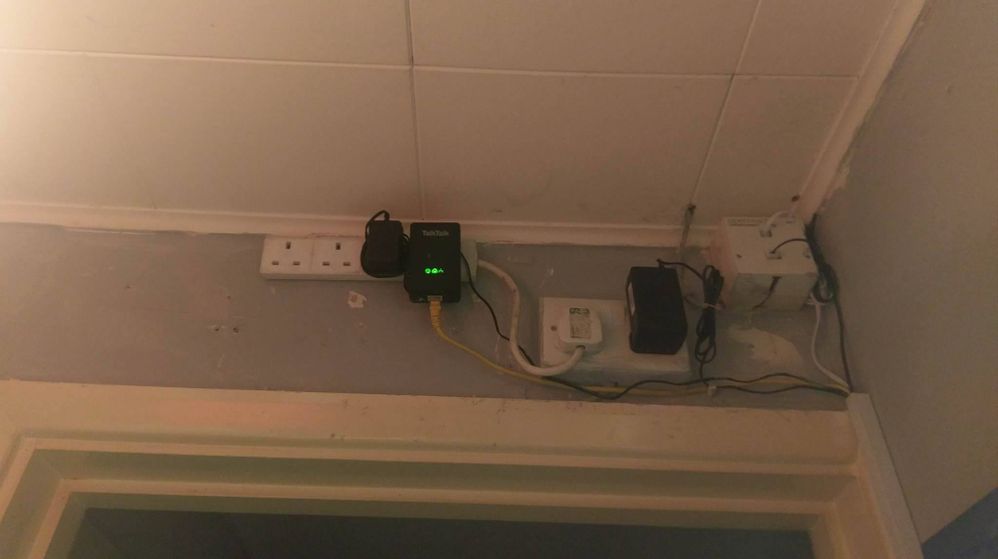 I’m glad to hear a new modem has improved your speed, and a tidier setup as well!
If this post resolved your issue please click the 'This fixed my problem' button

Well the joy was short lived. Today the phone line started to display some noise on calls and the Internet has been disconnecting randomly and the speed has dropped from 52/14 down to anywhere from 32/0.5 go 39/1....

First thought was the filter so I removed the filter socket panel (see image) and plugged direct to the master test socket with a brand new filter and the problem exists still. Still lots of noise on the line so phoned tech support (1hr sitting in a queue,!)

Went through all this with tech, no idea kept blaming my internal setup which I can't see how as direct to a test socket and he could see his end the dsl connection keep failing.

Tried explaining this, explaining I was in the master socket, no equipment other than a hub one, née microfilter and my PC cable connected (ethernet cable, not home plug) and I was on the router stats page, not speed test.

Eventually got them to agree to a tech visit after 10 minutes of saying no fault detected and that it will be at my cost if they don't find the problem, not sure how it's at my cost if the BT engineer is unable to fix the issue.... But anyeay

Despite connecting at 32mbps minimum the TV won't work and it's resetting pretty much all the time. Still havn't been refunded for the last 5 days downtime either.

So annoyed right now, this connection has been stable for nearly 3 years and the past 7 weeks have been full of issues.

Can anyone see anything I may have missed from the images?