I should point out at the outset that this is a problem with my girlfriend's 2008 MacBook Pro (El Capitan) on her connection - I use an old but reliable Netgear DGND3300v2 and don't have this issue. Also, we both live in a rural area where intermittent periods of random disconnection are a fact of life that nobody has been able to fix. We get random momentary power cuts caused by horses scratching their backsides on poles so I have a UPS.

Anyway, my girlfriend migrated from BT to Plusnet a few weeks ago and I configured everything exactly as per the instructions but after the initial set up and short period of trouble free browsing, the wifi connection dropped and would not reconnect. I spent hours trying to figure it out but eventually, all I could do was substitute her router with the Plusnet router which I wasn't using and everything was fine for a few days until it happened again. She had thought that it was a broadband problem because she just wasn't getting any data but when I looked, I could see that although sometimes there was a wifi connection and pages would not load, when I checked using my phone's wifi, pages loaded fine. Since then, there have been wifi drops and her MBP reported that the network could not be joined suggesting that it be moved closer but this still happens when sat right next to the router and when I accidentally put the wrong password in, it was rejected - so obviously there was some kind of connection.

I recall having similar issues with my MBP and the provided Plusnet Home Hub which is why I have used my Netgear router. I have read about disabling IPv6 but this is not a practical solution as it requires a Terminal command to make turning IPv6 off in System Preferences and it rests after a restart so would require the Terminal command to be performed again; something that I would not expect her to be willing or able to do.

All that can be done when this happens is that both router and Mac are rebooted in turn until a connection can be established which can take an hour.

I have wondered if the Router is using a channel which the MBP cannot maintain a connection. It would be useful to hear any other Mac users' experience.

If you are having issues with Plusnet Hub one, have you tried splitting the 2.4 and 5 GHz wiireless and assigning a new name to the 5 GHz wifi? 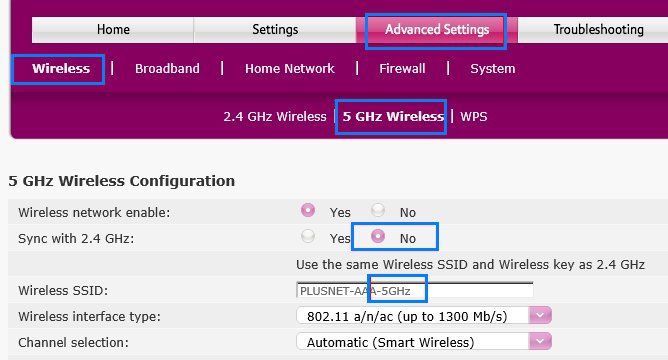 Thanks for the reply but it's not the same router. I may have misidentified it as I searched for images of Plusnet routers and I got the impression that it was called the Home Hub as opposed to the Hub One. For clarity, it is the Sagemcom 2704n. As far as I remember, there is no band splitting option.