Hub One Compatility with Powerline Adapters?

Hub One Compatility with Powerline Adapters?

We are having trouble with signal strength and speed to the house and then throughout the house. We work on WiFi as etehrnet cables are not pracical with the layout of the house and where the hub is located. Are Poweline adapters the possible answer? Are they compatible with the Hub One just to boost the signal and not to use with the TV option? Are there any that are bestter to use with Plusnet?

Powerline allows you to connect two devices as if they were connected via ethernet, except that they make use of your mains wiring. So they are inferior to ethernet - the extent depends on your mains wiring & the powerline adaptors.

The performance & compatibility does not depend on the end devices.

They are quite expensive and there are no gaurantees as to usability.

They don't boost any signal levels.

We have a 50-yr-old house with solid concrete walls which are hard work for a hammer drill never mind a wifi signal. We bought Devolo units six years ago, when we had the TG582 router on ADSL2, with one extender in the lounge and another in our bedroom. Not the cheapest but the tech support is excellent as we're non-techies. We went fibre two years ago and we get 36Mb plugged into the router, about 30Mb wifi to iPad on either extender.

When changing to a double socket I noticed the mains wires were quite slack, apparently a common problem as the copper compresses under the socket securing screws. I found that all the house socket connectors needed a half-turn or so, but then they were installed decades ago. They gave no problems but even I know that one needs the best connections one can get.

Incidentally, using Baldrick's guide elsewhere on this forum, I bought a BT HH6 for £10 on Gumtree and found it gives about 20% better wifi than the Hub One.

It might be worth reading this before buying Powerline devices   https://community.plus.net/t5/Tech-Help-Software-Hardware-etc/Powerline-Unit-Performance/m-p/1607450... Presumably you are considering devices with a wireless remote unit?

I have been here and ended up wiring the house with Ethernet cables. It was a right pain but I found routes in the end. This involved going through an outside wall cabling up the outside wall behind a drainpipe into the loft, through built in wardrobes etc etc. Cable length is unimportant up to 100m so tortuous routes can generally be found. No cabling is visible. Once installed you are guaranteed 100% reliability at all times. I can fit a wireless access point to the Ethernet outlet at remote locations.

It all depends on your set up and internal wiring.

In my currnet locaiton the fusebox, is just that, a box of fuses ( pull out and replace blown fuse wire with a new bit of fuse wire of the same amp rating, i use a homplug set up (devolo) where the second unit has a wifi hotspot built in 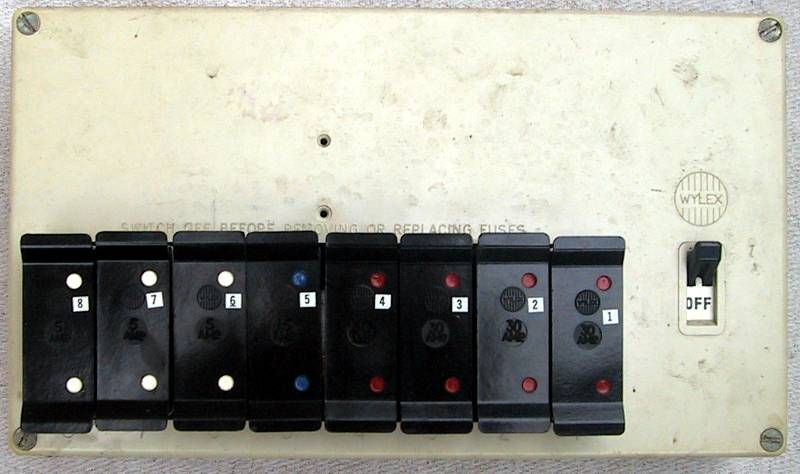 There are many reasons why that "consumer unit" should be replaced.

When was your house last rewired?

the fusebox dates to the late 1970's/early 80's, as does the property and most of the wiring etc.
is been looked at by a sparkie, and although old, it's in situ, so no need for additional work.
as for the rest of the property, outs had a few new fittings (sockets/light holders/switches) an electric shooter with additional RCD, and rcd sockets in locations where an extension lead is plugged In (high risk areas) as the fusebox lacks RCD. all the fuse wire is of the correct amperage
Message 7 of 7
(669 Views)
0 Thanks
Topic Options