I've been having really bad issues with internet drop outs (upwards of 20 per day); after 2.5 months, 6 OpenReach engineer visits, new lines installed, 24 pages of plusnet fault tickets and about 9 phone calls, the latest engineer appears to have halted the problem (only at 24 hours so it could change back!). He has connected a BT modem / router and I'm geussing turned off the wifi on the HubOne as both are running (bridged it?): apparently there have been reports of HubOne routers not working well with the Huawei chips in the exchange.

I have the BT one on loan, so I'm guessing I need to get a different ASDL / VDSL router / modem which will work with the Hauwei chip. I have no idea at all about modems etc - I'm reasonably technie but never got into networking stuff, so I'm a bit lost.

A) has anyone heard of this conflict before? and

B) I've looked over the forums for recommendations for routers, but I don't want to spend a load of money if it struggles with the Huawei chip in the exchange too.

Any advice please? Thanks!

(p.s. I should add - I've got two HubOnes and both behave the same)

@CHN  Welcome to the forum.

My neighbour and I are connected to a Huawei cabinet. He has a Hub One, I use a Smarthub 6 as they are better devices. Neither of us has problems. I assume the the BT engineer has simply by passed the Hub One modem by connecting this between the DSL from the BT Master socket to the Hub One WAN socket?

If so, there are no other setting changes required. You can get an ex Openreach modem, I recommend the Huawei HG 612 Model 3B from auction sites quite cheaply. It’s just a case of plugging them in and the jobs done.

If you want to try a different Hub you can get aBT Smarthub 6 from auction sites for about £20. Settings are here. https://community.plus.net/t5/My-Router/Using-the-BT-Smarthub-6-on-a-Plusnet-Account/m-p/1587673#M85...

@Baldrick1 Thanks for the info! I'll have a look at the HG 612 and the BTSmarthub and see what I can pick up. It's definitely a weird problem; the most recent engineer was accompanied by a senior coach. They spoke to a senior REIN engineer who had previously been out, and he'd seen an article in a chat group about the issue. The coach poo-pooed the idea but they decided to try a different router as a bit of last-ditch attempt. Well so far it's worked, and it's only thing which has in 2.5 months. I've got no idea why the issue would suddenly start but no one else has come up with anything.

(I'm afraid I've also been a serial lurker and hence only posting once in 4 years!)

fyi, the Hub One (BT Home Hub 5A) uses a Lantiq based chipset.    BT Smarthub type 1A and Openreach Huawei HG612 (type 3B recommended, discontinued in 2014/15) uses Broadcom chipset as also found in Huawei FTTC cabinet.

TPlink TD-W9970 also uses Broadcom chipset and and can be put into bridge modem mode for use with Hub One (using red internet port) or other router.  Latest variant is 'v4' according to UK TPlink website.

Any chance you can post photo and/or model number of the BT modem that has been loaned to you? 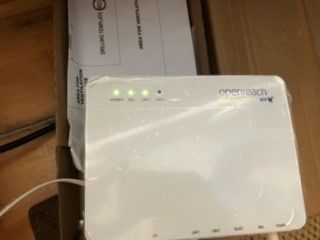 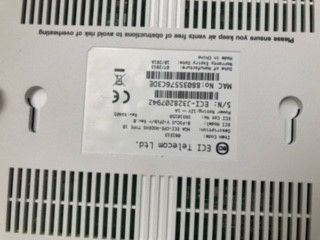 That is an old Openreach ECI modem.  It uses a slower older variant of the Lantiq chipset found inside the Hub One (BT Home Hub 5A)  I presume it is wired to red internet port of Hub One.

Photo too fuzzy to be able to read exact model number as there were two hardware versions of the ECI modem.  I recall the 'B-FOCuS V-2Fub/r Rev B' may be the last/latest variant which I think were made up to 2016.

Your original post mentions wifi may be turned OFF on Hub One.  No reason to turn it off unless it was causing problems with the Hub One?  Have you tried turning wifi on?

Did Plusnet send you a replacement Hub One when you first encountered problems to see if it would resolve the problem?

ie. to rule out defective Hub One.

@bill888 Yes it's wired to the red broadband LAN port and not the grey broadband DSL port. PlusNet eventually sent me a new router/modem and the same happens with both, so in theory ruling out a faulty device (unless they both are of course!). The last engineer said WIFI was turned off on the Hub One, and that the interim set up with the ECI modem would bypass the chip. At the risk of sounding dim I don't know how to turn the WIFI on or off! I'm also terrified of actually touching anything, after so many weeks of c20 drop outs per day and so much lost work, I'm relieved it's all steady.

Having said that, I do need to get a new router/modem so that PlusNet can close the ticket - it's being held open until I can check it all works with something permanent i.e. not on loan from the engineer. So any advice will be gratefully received!

You can 'enable' or 'disable' the 'Wireless Network' for 2.4 and 5 GHz wireless networks.

I think you would need to ask Plusnet directly as to how to progress ticket further and close it.  Plusnet may know whether Openreach has closed the ticket, in which case it is unlikely Openreach will demand the return of the ECI modem.

eg. will Plusnet make a one time contribution towards the cost of any new modem/router you purchase, with no guarantee it will even fix the problem?

Do you buy a second hand working Openreach ECI modem identical to the one you are using, and hope it works as well ?

I'd be surprised if Openreach comes back to you, and demand you hand back the ECI modem.

Openreach ended all technical support for the VDSL modems in 2017.  ie. the one they loaned to you has no warranty from Openreach.

I have an open complaint with PlusNet for poor customer service and a goodwill gesture has been mentioned, so that would cover the cost of a replacement router. And yes, the reason I haven't yet bought anything is exactly that I don't want to throw good money after bad (new cables, filters, mobile wifi dongle). TBH the money from PlusNet isn't actually the issue, just ensuring I can carry on working effectively from home with reliable broadband.

Interesting what you've said about the Openreach modem; the engineer has confirmed he's coming back to collect it by text so I have no idea why!

I'll watch that link, thank you, and try playing with the WIFI this weekend. Now I know it's the router I can at least start to investigate options - since November no one's had a clue up until now, so this means I can start to find a solution.

When you consider that the cure to your issue makes absolutely no sense it’s impossible to recommend a replacement modem/router that is guaranteed to work.

I must confess to being sceptical if this is really the solution or whether there’s something else going on. Did Openreach use your cables or theirs to connect the modem?

Have you thought of getting an ECI modem from an auction site and giving that to the Openreach guy?


the engineer has confirmed he's coming back to collect it by text so I have no idea why!

Looks like I was wrong then.  I suppose it could be the engineer's personal test modem, and he simply wants it back, because they are not manufactured or officially supplied any more.

Okay I haven't given the full story as you'll all crack up (the engineers did): it wasn't just a conflict with the chip. The senior REIN engineer had read an article about solar winds affecting the pattern of radio waves across Europe, and that seemed to be causing a lot of the problems with the chip.

The two engineers visiting (the REIN engineer was on the phone and relaying the info from the article) were completely in disbelief. After 3 hours of running all the same tests as the previous 5 engineers (which all showed no problem - again as previously) despite the evidence of the all the dropouts, they put in the BT modem because they didn't know what else to try, and it was time for them to clock off.

Lo and behold - it's solved the problem.

So do I just have two faulty Plusnet modems, even though all the engineer tests showed they were working? Is it solar winds? Is it Huawei taking over the world by making other routers not work? (Uh - I don't believe that!) I don't have a scooby, and after so many hours of tests, engineer visits, phone calls, etc etc, I just want to have broadband so that I can work from home

No one has been able to solve the problem, Plusnet has been abysmal in support (with the excetion of one chap - Tom Hankey - who's been absolutely brilliant), but now I actually have service. (I have 24 pages of info on the fault ticket.)

So there's the story!

And my concern that I don't actually know the origination of the issue is what's stopped me just buying a new router - I know it's all weird!

When you swapped out the Plusnet routers, did you change the PSU, or simply reuse the old PSU with the new router - thwy are the same so why not!

I had a lot of issues with my (admittedly BT line) using a BT hub 6. Swapping the router for a spare, and several Openreach visits didn't help. Eventually I thought about swapping out the PSU (hard to get at down behind the computer along with lots of other stuff!).

Lo and behold  all my line drops went away.

Possibly your issue is now fixed because the new modem uses a different PSU, and now the old router PSU isn't interfering with the ADSL signal.

I'm afraid I'm one of those people who just plugs the router in and has no clue how it works. Now if you want to talk about the back end of a SQL database, I could talk for hours!

@CHN PSU = Power Supply Unit - the brick that you plug into the power socket.  HTH