I have been having major issues with my 2.4ghz signal, It's only going up to half of my 45mb download speed. The upload is fine.

I have tested it on all devices and get half.

The 5ghz signal is fine.

I have checked on inssider and chosen wifi channels that are less congested and even chosen some that are not even used by surrounding signals.

I have not bought any new equipment which would interfere with the signal and only use microwave when need too and is always turned off.

Everything worked fine for over 5 years and was getting full DL & UL wired/wireless, overnight a month ago its starts playing up.

Thinking it's the PN Hub One, I bought a Netgear Nighthawk router today with 6 antennas and it's still doing the same.

I turned off each device and tested to see if an individual device was causing issues but still no joy.

The only way it gives me full 45mb download speed if I'm standing over the router.

I'm on my last legs here and forced to use powerline adapter on 2 laptops that use 2.4ghz.

Its becoming a issue with the iPhones and iPad as the 5ghz is not good enough for some rooms and switches back to 2.4ghz signal causing lag as it's only using half the speed.

Any help from the PN community would be appreciated, as I'm a bit sick of forking out £200 pounds today.

I think I'd be a bit miffed too but I have in the past 'upgraded' only to send the darn thing back as faulty. 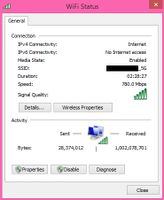 What do you get with a device (laptop etc) using a cable direct to the router? Although you say it only gives you 45Mb actually hovering over the router and the 5Ghz side is OK. Sounds either like chronic interference or another naff router - doubt the 2nd part though. If your cable connection is fine (run a couple of speed tests from various websites).What does the WiFi signal strength show on the devices i.e. laptop? If you go into the adapter setting on the laptop what does it show looking at the settings, as in photo left i.e. speed and quality

You say the 5Ghz side is fine and yet; 2 devices switch from it to 2.4Ghz. Was the 5.Ghz side always an issue in other rooms?  Is it possible that someone else is using your bandwidth?

Definately not duff router as I'm getting same issue on Asus N56u, Plusnet Hub one and new netgear nighthawk.

Wifi strength on devices is Full as I live in a 2 bed house with chip board walls not bricks.

5ghz is ok, but when your further away from router it's weaker and 2.4ghz is always used.

I 'm constantly on router gui and never seen a unrecognised client in 5+ years.

Applications like Insidder only detect other broadband transmissions, not all the other junk that uses the 2.4GHz band. This can range from baby monitors to cordless phones. For example I have had a cordless Skype phone that killed my 2.4 band dead. Have you had any new wireless appliances recently?

I would go around the house and switch off all wireless devices except the router and the device you are using to see if your speed recovers. If so keep switching the other stuff back on one at a time until you find the offender.

Thread moved from Fibre Broadband to My Router.

Done all of switching on/off 1 by 1, there's hasn't been any new devices for over 5years.

Going to try all 13 channels on new router individually to see it picks up.

Its driving me nuts!

I use Wifi Analyser as a sniffer app. This is installed on a mobile phone. When you are selecting the best channel you need to monitor other transmissions both at the router location AND where you use your devices.

Another thought, have you tried moving the router.

Phone socket near front door, and always has been in same location since Tesco and now plusnet internet, never had any issues before.

I am limited due to telephone socket location. I don't  have sockets for power in alleyway upstairs.

And prob need a 5m dsl lead to travel to nearest plug socket central to house.

Finished testing on all 13 channels on 2.4ghz wifi.

My beloved channel 13 which I have used for 5 years plus and has always been chosen by routers on the Auto option gave me 12.5mb download.

I am getting lowest RSSI in tests compared to neighbours.

Dont know what else to do? Tested on 3 routers now and even spent £200 today on netgear nighthawk.

I have been having major issues with my 2.4ghz signal .... I have tested it on all devices and get half .... overnight a month ago its starts playing up .... Thinking it's the PN Hub One, I bought a Netgear Nighthawk .... it's still doing the same .... I turned off each device and tested .... forced to use powerline adapter on 2 laptops that use 2.4ghz .... iPhones and iPad as the 5ghz is not good enough for some rooms and switches back to 2.4ghz signal causing lag .... Done all of switching on/off 1 by 1 ....

So, the question is, what changed a month ago? Neighbours could be the route cause of this, perhaps?

It doesn't sound like a router issue, more of external 'forces'

But have you turned everything off in you house at the same time? With just one router and one laptop. Obviously not forgetting a possible wifi thermostat and of course making sure you switch it all back on.

As you've got PLA's, why don't you run one router downstairs and the other upstairs - I've not used any Netgear stuff, but plugging an ethernet into a PLA, then the other PLA to the ethernet port on the other router (with the second routers DHCP off). You'd then be beaming a better signal to each floor, swamping your neighbours out, perhaps?

As your Apple gear is bouncing, you can unsync the 2.4GHz and 5GHz on the PNH1, guess it can be done on the nighthawk?

Other than that, I'm outta options!!

Got no option but to get 5m dsl/Ethernet to nearest upstairs electrical plug, I'd rather it be a dsl cable then a thick cat 5, mrs won't be happy with a lead trailing upstairs, and I have to find a way to get it into a room without putting holes into door or wall.

I must of missed something.

The powerline (PLA) would plug into the same mains socket. You'd only need a shortish ethernet to go from router#1 to the PLA (plugged into mains socket), then the other PLA in any upstairs socket, with an ethernet cable going to router#2.

There's no need to run a long cable anywhere, the mains wiring acts as an ethernet cable.

Sorry, confusion from my part, I meant to say if I took all the Whole setup to upstairs where we mostly use all devices.

The easiest way would be to use the Hub One downsrairs as you need to configure the upstairs one as an Access Point. If you look at the Netgear manual you will probably find that you can set it up as an Access Point through the settings menu without any of the fiddling requied to convert a Hub One into an AP.