I am considering buying a DrayTek Vigor 130 with the  goal of hopefully improving download speeds,etc.

Currently I have the Plusnet One hub on the second floor in the living room (centre of the building) as I am in a town house. I am using a telephone extension cable (not great, but still getting reasonable downloads) to link the router to the master socket downstairs.

The long term plan is to run ethernet through the entire house  in conjunction with a mesh wireless system but that is a long term project.

My questions is this: will it be possible to connect the Draytek to the Plusnet One Hub or will I have to replace the hub with a router that is more configurable. The Plusnet hub is not as configurable as previous routers have used before.

In a nutshell I want to bin the extension lead as this is literally the weakest link.

Thanks for your help!

According to some posts I've seen, you can use Hub One WAN port with a modem, besides, you could make Hub One much more configurable by flashing OpenWrt (https://openwrt.org/toh/bt/homehub_v5a , https://community.plus.net/t5/Tech-Help-Software-Hardware-etc/Running-OpenWRT-on-the-Plusnet-Hub-One...)

The downside of using the WAN port is that the MTU would be reduced from 1500 to 1492 because I don't think Hub One supports (baby) jumbo frames.

If you're going to run Ethernet through the entire house, why would you want to use a mesh wireless system? Most people had to settle for mesh wireless because they didn't have an Ethernet/wired backhaul. You're lucky enough to eventually have Ethernet throughout the house and you still want to use mesh? Wouldn't it be better to connect APs to the Ethernet backhaul and enable Fast Roaming? There're many inexpensive APs (as well as Hub One) that are fully supported by OpenWrt, you could enable Fast Roaming - 802.11r (and optionally 802.11k and 802.11v) on them, this would give you better wireless performance than a mesh system would because each mesh hop would decrease the wireless bandwidth by half.

@bbpn wrote:If you're going to run Ethernet through the entire house, why would you want to use a mesh wireless system?

@ablearcher  The Draytek 130 is a good modem (used one on my last setup) but as to whether it actually improves download speeds, I didn't find any speed improvements over using the BT supplied modem (HG612) that I had originally.

Customer / Moderator
If it helped click the thumb
If it fixed it click 'This fixed my problem'
Message 4 of 10
(1,973 Views)
0 Thanks

@bbpn Thanks for the suggestion of flashing the Hub One with OpenWrt, great suggestion, never realised you could do this. Will plan researching into this.

I'm looking into wireless options, I did think about adding a  couple of access points using PoE around the house; I haven't really looked into mesh systems, if APs are better then I'll go down this route.

I plan on installing a layer 3 PoE switch in the loft and then running ethernet from there. Not sure whether to have face plates or simply crimping the end of the end of the cables with RJ45s. Plan on buying 100m of Cat6a, don't think it will be enough though.If you have any more comments and suggestions please post them.

Thanks again for your  help

@idonno. Thanks for your comments, they are very much appreciated. Still looking into the wireless option, as the family gets older their bandwidth needs are increasing. The poor Plusnet One Hub struggles due to the number of wireless devices we seem to have.I ideally want the set top box(s), PC, laptops all to be wired, the phones and  tablets can use the mesh or AP system.

I'm hoping the modem may improve speeds, latency,etc slightly; at the moment I have a 20m+RJ11 phone extension running from the master socket all the way upstairs to the Plusnet One Hub,  which possibly acts as an aerial and picks up EM interference. We had a real problem in our old house; every time the boiler turned on it would emit a blast of EM which was not only picked up by the radio but all by the extension lead which caused my connection to drop out. Hopefully a shielded Cat6a ethernet cable would reduce this effect. I'll probably do a couple of tests later, i.e. take the laptop down and router down to the master socket and see if there is a difference, i.e.effect of shorter ADSL cable on download speeds.

You mentioned you use this setup before. Was it simple to set up, i.e. connect the DrayTek Vigor 130 to the master socket, then  connect this to the WAN socket with a Cat6a cable to the Plusnet One Hub and simply turn it on? Or was there some configuration? Did you use the standard firmware of did you fuse OpenWrt

Thanks for your help and suggestions in advance, learning a lot from these replies.

Have you tried shielded RJ11 cable to deal with the EM? What does the Hub One modem stats say? If you're using ADSL, is it in interleaved mode (higher latency, but more stable)? If you put OpenWrt on Hub One, you could adjust downstream noise margin which affects speed and stability - see screenshot below. 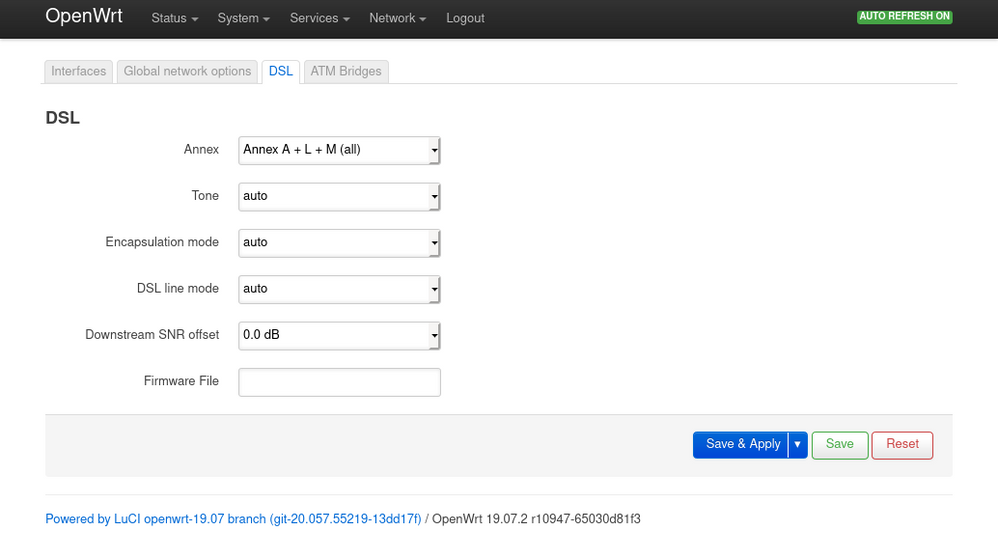 If you're not sure whether to use wireless mesh or non-mesh, you could buy APs that are fully supported by OpenWrt, you could then turn on/off mesh protocol and experiment (https://openwrt.org/docs/guide-user/network/wifi/mesh/start). Wireless mesh is just a software protocol (with hardware driver support), a wireless mesh network is a network consisting of APs running such protocol. Below is OpenWrt wireless mesh configuration screenshot:


@bbpn wrote:If you're going to run Ethernet through the entire house, why would you want to use a mesh wireless system?

Mesh is a type of network topology, it could be wired or wireless (https://en.wikipedia.org/wiki/Mesh_networking ).I wasn't comparing wired networking with wireless networking, I was comparing wireless mesh vs wireless with wired backhaul as @ablearcher mentioned that there'd be Ethernet throughout.

To use different wireless APs as one, one just needs to set all APs to the same SSID and encryption.

When a wireless device roams from one AP to another in the above set up, it would disconnect the old AP then connect to the new AP, this could take seconds resulting in wireless dropout.

To make roaming smoother / faster, 802.11r could be enabled on those APs, this would reduce the disconnection-reconnection period to 50ms range.

A wireless device in the coverage of multiple APs may not know which AP would provide the best performance, it would normally connect to the AP with the strongest signal which wouldn't be ideal if the AP is reaching full capacity, the solution is to enable 802.11k and 802.11v on APs which would make additional network information available to the client devices, so that clients could make a more informed decision about which AP to use.

Individual APs can have 802.11r/k/v enabled or disabled, it's not determined by the network topology (mesh or non-mesh). You could have a wireless mesh system without 802.11r/k/v, and when devices roam from one AP to another, users would experience dropout.

Due to many vendors' marketing hype, many consumers don't have a clear idea about what a mesh network is, let alone its pros and cons. I think what most consumers want is stable and fast wireless with decent coverage, that would probably require multiple APs, for multiple APs and devices to work together cooperatively, one would need to enable 802.11r/k/v (assuming client devices support them, many recent devices do). To connect these APs together, normally one should consider wired connection (e.g. Ethernet) first, as it's reliable, reasonably fast and doesn't use a shared medium (wireless medium is shared), if that's not possible, one could then think about wireless mesh, repeater or a combination of them. One could also use wired backhaul in conjunction with wireless mesh as backup.

Apologies! I couldn't agree more about using ethernet cable to connect them up, its how mine is done.

Sorry @ablearcher I never used the PN Hub with the Draytek. As I was going down the road of using my own kit, I bought a TP link router. And that was (and still is) extremely reliable. I'm of the school that if you want reliable kit, you need to pay for it.

Thanks to both of you for all your advice. The RJ11 cable I am currently using is shielded so not sure if getting a modem will make any difference to the speed. In fact I carried out a couple of tests, i.e. a 1m RJ11 cable and there was no real change in download speed.


We had a real problem in our old house; every time the boiler turned on it would emit a blast of EM which was not only picked up by the radio but all by the extension lead which caused my connection to drop out.

I'd expect the shield would help with the EMI. Is the shield grounded? If not, you could try grounding it or adding another layer of shield yourself using tin foil or oven foil then grounding the outer shield.

If your line gets disconnected regularly due to EMI, the DLM might lower the speed to stabilize the line. So if you want maximum speed your line can support, it's import to make sure your line doesn't get disconnected frequently.