I've come to the following conclusion - I have no idea what is going off, but the 2.4GHz wifi for me now anyway, isn't working as it used to. I can't find a reason why this laptop or my phone is causing this, though guess it could be both...?

A seldom used laptop* was 'tested' late last night by downloading windows updates over wifi - guess it could be that laptop too, but it took roughly 2 hours to download and install them. I reset that laptop in the end, start again with a clean slate.

If it was (thus far) 3 of my devices, then I simply can't answer why they worked fine on the previous router firmware. If it turns out I've done this, then I'll hold my hands up and admit it, but as I say, I can't actually find a reason why.

*not the same laptop that started this thread

I've got good speed via wifi to the router: 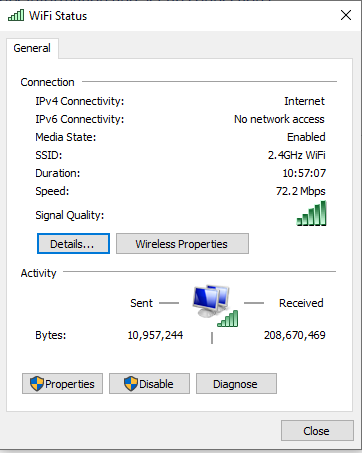 The speed itself (using wifi this time) isn't too bad either:

Guess it could be the weird allocation of SG's DNS on the router, which on the advice of Anoush, I factory reset it again, but it's still using them. So that's 2 full factory resets since the new firmware, whereas before the router hadn't actually been touched for months.

Due to having OR attend yesterday, I tethered this laptop to my mobi and it worked fine. This is why I'm thinking something has changed (either DNS, or firmware).

No 'competing' wifi routers in range on my channel either.

It's looking like I'll need to go 3rd party router and/or upgrade my devices...

Anyway, back to ethernet.

Thank you for confirming the checks that you have carried out.

If a firmware update was pushed out manually, factory resetting may revert the firmware back to the standard version it was on previously. As you have completed checks that will narrow the chances of your devices being the cause of the issue, I have sent a new router. This will tell us if it's a hardware failure, please allow 3 - 5 working days for the router to be received and let us know how you get on.

If a firmware update was pushed out manually, factory resetting may revert the firmware back to the standard version it was on previously

, it doesn't. Unless you know something I don't? Bob even asked me to do this after the firmware was updated. My 'new' firmware was initially dated 11/03/19, and after Bob's suggestion of resetting it, all it did was update run on the new firmware but with a different date (21/01/18) - and I'm sure Bob said this can happen.

Edit. Silly me, you wrote manually. AFAIK mine was automagically sent. My bad. Ignore me. Carry on!

I have sent a new router.

The love of my life (main acc holder) just text me regarding a new 'toy' and she didn't know why. I'll put her in the picture. But yep send away as at least I can see if another router cures these issues.

Who knows, might even stop my connection to the world from dropping...?

Don't forget to send a returns bag with label - unless you want me to 'dispose*' of this one myself?

*has anyone fired one off to the moon yet!!?

I have also ensured a returns bag is sent however, it may not be received the same day as the new router. Hopefully it cures both issues but if it doesn't we can continue to investigate the issue.

However, as I always do, it'll be factory reset before it gets thrown placed in the bag and the bag is thrown 30 metres put in the postal system, where it then gets smashed in transit carefully delivered. But is there someone (ie Bob) or a department (ie Bob's wonderful-second-hand-hub-shop) where this hub can go to? So that as this one, which has been in use for 2+ years, can be set on fire tested to see if something internally has failed, rather than just going in the bin for recycling?

From experience, any BTHH's that I sent back to BT went (afaik) back into the system, rather than pulled apart to see why it/they 'failed'.

I have sent a new router.

Can't fault the speed of it's delivery!!

Settings tweaked before connecting to the network and will see how this one performs.....

(I'll have to use the new packaging for the old router, as can't find the original box!!)

I didn't know whether to post this here or here or anywhere else.

So I'll drop it here instead.

As you can see, the phone connects at 100.0Mbps and then immediately drops to 6.0Mbps. This is continuous and repeatable. I've not checked for the same on 2.4GHz.

(lost the ability to edit posts, but not sure if this is firmware related or my ongoing connection issues - fwiw, my upload SNR is currently 1.0dB)

Anyway, I think I've spotted a possible reason why 5GHz is 'failing'. I've not checked this against 2.4GHz, but guess it might be the same....? Note the above connection speed of 100Mbps given by the router - this must be wrong! As my phone continues to report 433Mbps. So where is the 100Mbps coming from, it's as if the hub thinks I'm possibly on Ethernet or something similar. I'd expect them to both report the same connection speed.

Not sure what caused this

But noticed the recent posts page was updating but phone wasn't pinging with the email notifications...?

(the phone and laptop are currently next to each other)

Checked the phone and it, for reasons yet unknown, had dropped the 5GHz and moved to 2.4GHz.

This doesn't however explain why the emails were delayed. Moved it back to 5GHz and it started pinging

(stares blankly at the HH5, waiting to be put to some use)

I'm on the fence with this atm

Throughout this evening I have noticed that my phone (on 5GHz) doesn't always ping with email notifications when it should be, plus my loading/refresh icon at the top of the screen is staying on longer than usual. As examples, I do not have auto app updates turned on, so I check and either manually update or in some cases do not allow the App to update (personal preference). BBC news app loads a little on the slow side and again the loading/refresh icon is on for longer than normal.

This laptop (on 2.4GHz) is a little slow to load pages on these forums and trying to reply can be slow to load too, also noticed it has buffered when testing on YT. I actually thought it was going to time out when trying to access the hub UI.

(I may drop phone to 2.4GHz and move the laptop to ethernet to see if things improve)

Oh dear, I think I now know what it is.

Just plugged this laptop in via Ethernet and its an immediate improvement. The hub UI is much much quicker to load the page(s). These forums seems a lot more responsive too.

The phone was on 5GHz and using the BBC news app as a test, I went to the 'My News' section and swiped down (to refresh page) and the refresh icon was on for 28 seconds - that's way longer than normal

Moved phone to 2.4GHz, repeated the above and it took 24 seconds - still longer than normal

From this brief testing, it does look like the firmware update is the guilty party, I just don't know why...?

Thanks for the update - I'll let @bobpullen pick this up with you in terms of the firmware and its response times/throughput.

To my knowledge, there are no issues with the most recent firmware that would cause the delays you're describing.

Thanks for giving Bob a tap on the shoulder

I have to admit, there's not many of us at the moment. But there are others out that are starting to filter on to the forums. I have posted on some of them, more so to offer them advice, but also so that I can be nosy part of any responses.

I am aware in one case where Bob reverted a router to the previous 259 firmware too.

This new router was, for me, fine on 259 and initially was ok on 263, it seems to be after 4ish days on the newer one when things start to 'act' up. I'm aware of an odd connection report (as mentioned above) about 5GHz showing as 100Mbps, but that was also present on 259.

I do, imho, still think the main issue is the router caching the devices, which after x days/hours/mis it can't cope and boots the devices. Happy to be proven otherwise

(the ability to edit has yet again gone awol)

Brief testing, nothing verified, but:

With 5GHz turned off at the router, using my mobi on 2.4GHz and repeating the test (BBC - My News - refresh) and it took 44 seconds for the refresh to finish. The only thing I know that was using the connection was just this laptop (now ethernet), nothing streaming, just open on the recent posts page.

I would have to say my ongoing fibre connection issues aren't helping matters, but it's certainly taking longer now than before the 263 update.

I'll conclude testing here for now, wait for OR tomorrow and see if others (in addition to those I've read about) also start to report wifi issues on firmware 263.

The buzzing has continued on and off today, but didn't have routerstats running at the time to see if it does (like the results seem to show) 'knock' the SNR - but that's mentioned elsewhere on these forums.

Thanks for your diligence @DS.

It's certainly appreciated when customers are able to run all of the testing, it helps us massively.

Please let us all know how you get on with OR tomorrow and if you need anything else in the meantime we're only a click away.